According to the Bureau of Labor Statistics, people working an average 8.8 hour workday are actually only productive for about three hours.

So where is all that wasted time going?

According to the Bureau of Labor Statistics study, the four most popular unproductive activities were the following:

Given this data, it's more important than ever before for teams to make the most of their productive hours.

We've compiled a list of seemingly innocuous phrases that could be secretly sabotaging your team's productivity. Read on to learn what to avoid, and what to say instead.

When you tell a colleague that you need an asset by the end of the day, you're essentially asking them to drop everything else they're currently working on to focus instead on completing your task. This could potentially throw off their whole day, and lead to a problematic backlog they'll need to scramble to unearth themselves from.

If this phrase pops up regularly in your office, it could be an indicator that your team needs to rethink the way you communicate around project goals and deadlines. A shared work calendar or other project management tool can help your team be more aware of what others are currently working on, and keep everyone on track with a shared time line of the project's progress.

This might seem like a productive way to assess the progress of a project, but providing a percentage isn't the most accurate or helpful way to communicate how the project is really moving along. You might have roughly 75% of a project's tasks complete, but does this really provide the best picture of where you currently stand? Not all tasks are created equal, and that last 25% could actually take longer and require more effort than the first 75%.

Instead of throwing around a percentage of completed work, communicate your progress more holistically: "Here's what we've done so far, and here is what still needs to be done." It's a simple shift, but it gives your clients a much more precise, honest picture of where the work currently stands. It also helps your team more accurately understand the project's progress.

Challenging your colleagues' opinions in a respectful, productive way has been proven to lead to more meaningful discussions and creative solutions. But if you're going to dissent, make sure you can back it up -- or you may just end up stalling progress instead.

Expressing mild dissent or uncertainty without clearly explaining why or offering viable alternatives doesn't bring anything actionable to the table. It doesn't give your team a place to start examining potential issues or brainstorming better solutions, since you haven't really explained the perceived problem in the first place.

Yes, sometimes your gut just tells you something is off -- but citing your gut doesn't give your team anything tangible to go on. Challenge yourself to dig deeper into your own opinions and express the reasons behind them with firm certainty.

4) "Could you finalize the final final version?"

How many designers does it take to approve the final version of a project? In some cases, way too many. The approval process at some agencies is essentially a poorly-planned obstacle course -- unstructured, time-consuming, and more than a little exhausting.

Without a formal approval process in place, projects can get stuck in a seemingly endless cycle of revisions and tweaks, resulting in several "final" versions of the same thing. Not only is this a major pain for your team, but it can delay the project and frustrate the client.

If you find yourself sorting through folders all titled with variations of "final_final_16", it may be time to rethink the way your team finalizes projects. Take the time to agree on a straightforward approval pipeline at your agency, and stick to it. Remember: Abandoning perfectionism is the key to growing your business and producing better work.

This commonly used phrase frequently finds itself on management jargon blacklists, but it still manages to sneak its way into everyday office conversations.

"Let's take this offline" is basically a thinly-veiled way to say, "I don't want to talk about this right now -- let's deal with it later." Sometimes, it's perfectly acceptable and efficient to table a topic until later. Maybe the current setting isn't appropriate, or there are more pressing matters to attend to.

But this phrase becomes problematic when it's used to keep putting off more challenging conversations. It always seems easier to tackle the harder stuff later, but it only puts undue pressure on your team to get more done in a shorter period of time.

If you absolutely need to put something pressing on the back burner, don't just push it away without explicitly planning a time and place to discuss it later. "Let's talk about this at our morning meeting tomorrow," is a lot better in the long run than, "Let's avoid this as long as possible."

Thinking bigger and better sounds undeniably awesome, but it's a practically meaningless sentiment. Some variation of this phrase usually gets thrown around at creative brainstorm meetings in an attempt to encourage divergent ideas, but it's unlikely to spur creative insights or force your team to consider new points of view. Unfortunately, creativity doesn't have an ON switch.

As an alternative, consider a quick creative exercise to get your team warmed up. Lisa Bodell, the author of Kill the Company, suggests playing "Kill a Stupid Rule" -- a team game designed to jump start creativity.

The rules are pretty simple. Give your team 10 minutes to answer the following question: "If you could get rid of any rule, either kill it or change it, what rule would you choose and why?" Have them write their answers on sticky notes. When the time is up, have everyone stick their rule on a whiteboard with two axises: Ease of implementation on the Y axis, and degree of impact on the X axis. Like this: 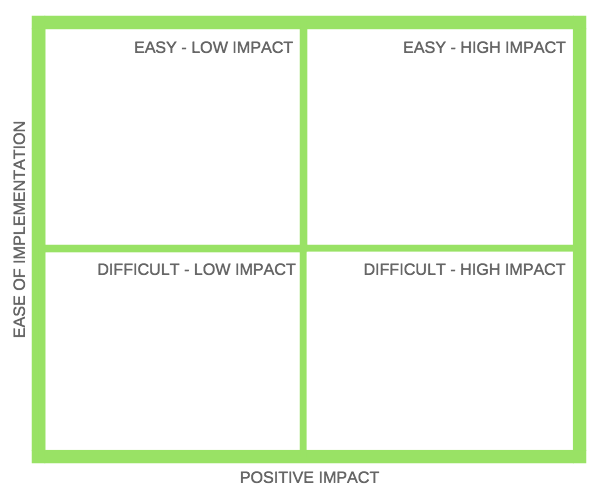 Bodell recommends having a discussion with your team after all the rules are placed on the grid -- Are there any rules you can cut on the spot? If so, do it. It will make your team see you're willing to get rid of processes that hinder creativity.

For more ideas, check out these science-backed methods for improving creativity.

Are there any phrases that hinder productivity in your office? Share with us in the comments.