The Holiday Season. It’s a season of giving. A season of eating, drinking, and being merry. And, most importantly of all, it’s a season of buying biomorphic robots, sleeved blankets, and sexually suggestive fitness equipment.

Don’t worry, all of those references will make sense soon … I think. But the main point here is that each and every holiday season, we’re presented with a fresh array of “must-have” products, from toys and trinkets to consumer electronics.

Now, some of these products go on to become store shelf staples, returning each and every holiday season while gaining (or at least, maintaining) market share. Other products never take off, and are pulled from store shelves before they ever get any real market penetration.

And then, we have the fads: products that drive people bonkers for a holiday season or two before seeming to disappear completely.

I’m sure you can recall at least a few of these fads from the 1990s: the golden era of holiday toy fads. There was Tamagotchi, Beanie Babies, Furby, Power Rangers … the list goes on and on.

For the purposes of this post, however, I’ll be looking at the next generation of holiday product fads: product fads from the 2000s. And I’ll be using Google Trends to illustrate how interest in particular products has changed over time. 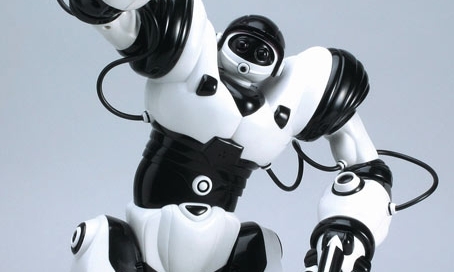 It walks. It talks. It grabs stuff. It throws stuff. Heck, it can even do kung fu!

Yes, my friends, I’m talking about everyone’s favorite biomorphic robot toy, the RoboSapien. Never heard of it? Welp, that’s because after its 2004 heyday -- which saw 2 million units sold -- the RoboSapien sort of took a nosedive.

Check out the Google Trends chart below to see how interest in the RoboSapien peaked in December of 2004, before gradually declining. 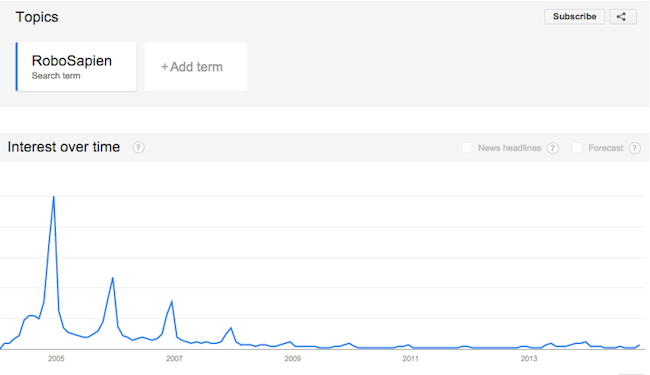 Interestingly, RoboSapien was used as an example in a free, online business and marketing book. And I think this book can help shed some light on what happened.

The problem? Too. much. hype.

“Robosapien was also getting lots of free publicity. Stories appeared in newspapers and magazines around the world, including the New York Times, The Times of London, TIME magazine, and National Parenting magazine,” the book notes.

“Commentators on The Today Show, The Early Show, CNN, ABC News, and FOX News remarked on it; it was even the talk of the prestigious New York Toys Fair. It garnered numerous awards, and experts predicted that it would be a hot item for the holidays.”

Those experts, of course, were right. RoboSapien was indeed a hot item for the 2004 holiday season, and interest flickered again in the 2005 and 2006 holiday seasons … before tapering off for good.

It’s a blanket. It’s a bathrobe. It’s not supposed to be worn instead of actual clothes, but hey, I didn’t read the instructions!

Oh, the Snuggie. The most popular “sleeved blanket” (that’s the generic term, no joke -- I looked it up) of all time.

The Google Trends analysis of interest in “Snuggie” tells the story of the sleeved blanket fad perfectly. 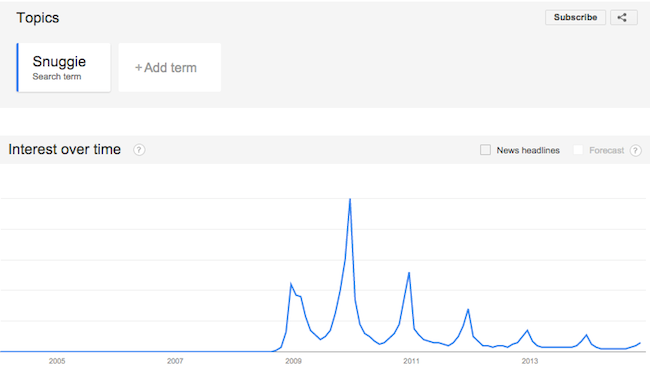 So, why does interest in the Snuggie eventually peter out? My answer: market saturation.

Everybody and their dog has a freakin’ Snuggie. I have one. And I have no clue where it is.

According the Huffington Post, it only took until 2010 for 25 million Americans to have Snuggies. That’s about 1 in 12 Americans. And of course, that number has only grown.

You can see in the Google Trends chart that while interest is considerably lower compared to its 2009 heyday, Snuggies are still getting mini-spikes in interest every holiday season. 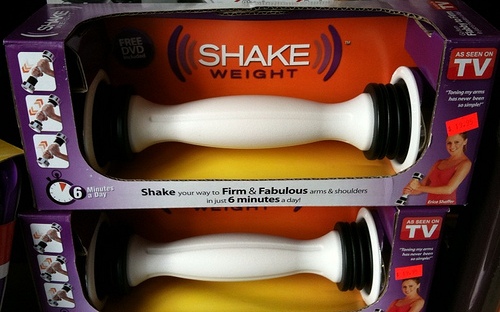 “Call it this year’s Snuggie.”

That’s the opening line of a 2010 CNBC article about the Shake Weight: the almost too-suggestive-and-weird-to-be-true oscillating dumbbell that racked up more than $40 million in sales in 2010.

You can see in the Google Trends chart that interest in Shake Weight peaked during the 2010 holiday season (specifically in December). But after that, there was a fairly steep decline. 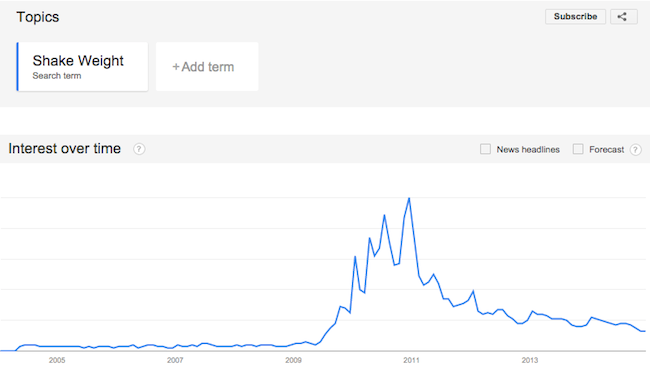 Of course, we can also see that search interest in Shake Weight hasn’t fizzled out completely. Why is that?

For starters, it’s still so darn funny, people are still talking about it and cracking jokes about it. There are still also plenty of people out there debating the Shake Weight’s effectiveness. Does it really tone your arms, or is its sole purpose to make people uncomfortable?

I’ll leave that question to the experts. 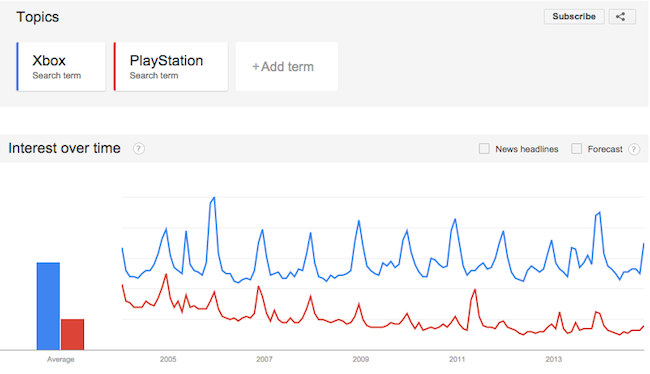 Now, if we drill down and look at the individual Xbox and PlayStation consoles that are competing with each other for interest, we can notice a cool trend. As interest in the next generation of consoles rises, interest in the older generation drops (which makes total sense -- consumers are moving on to the latest innovation, the better version). 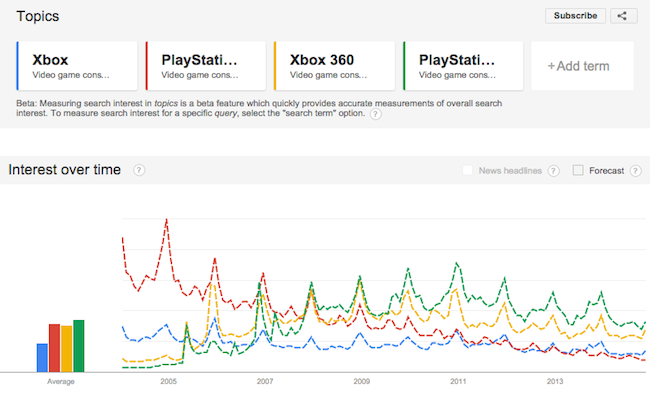 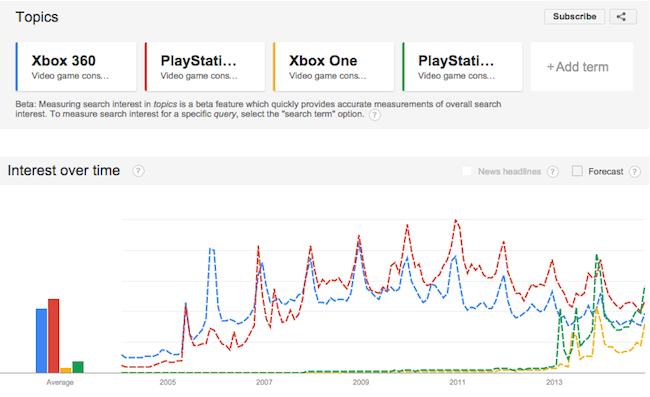 In a sense, Microsoft and Sony are manufacturing mini-fads. They want interest in their new consoles to (eventually) fizzle out so consumers can start getting excited about their even newer consoles.

The Return of Tickle Me Elmo 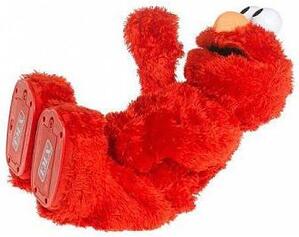 In 1996, Tyco Toys took a beloved Muppet character, turned him into a cyborg, and convinced children across the country to tickle him. Then, the cyborg-with-stuffing would laugh at these children.

Needless to say, it was a huge success!

In addition to Tyco seeing its sales increase from $70 million to $350 million in 1996 thanks to Tickle Me Elmo, an entire secondary market (a.k.a. “black market”) developed around the toy during the 1996 holiday season. There was so much demand, desperate parents were willing to pay well above market price for this plush little bugger.

Of course, Google wasn’t around in 1996, so we can’t use Google Trends to analyze Tickle Me Elmo’s search interest during this craze. But for the sake of science, I plugged “Tickle Me Elmo” into Google Trends anyway. And lo and behold, there was a massive spike during the 2006 holiday season. 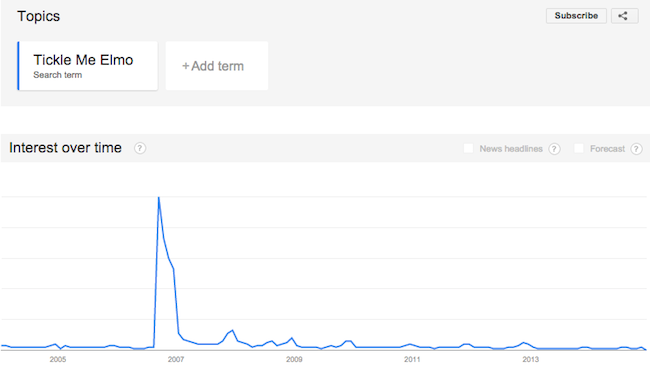 What’s up with that? Turns out, Tyco released a new version of Tickle Me Elmo in 2006 to celebrate the toy’s 10th anniversary. But as you can see in the Google Trends chart, the celebration didn’t last very long. 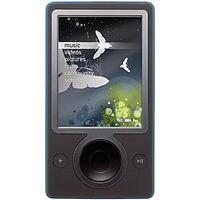 Alright, alright. I hear you. The Zune probably doesn’t deserve to be on this list since it wasn’t a holiday product fad. It could be more accurately described as a non-seasonal, total product disaster.

For those unfamiliar with the Zune, it was Microsoft’s 2006 response to Apple’s iPod, which had made its debut five years earlier. You can see in the Google Trends chart below that interest in “Zune” peaked with its 2006 release, and spiked again during 2007’s holiday season (which coincides with Microsoft’s release of its second generation Zune). 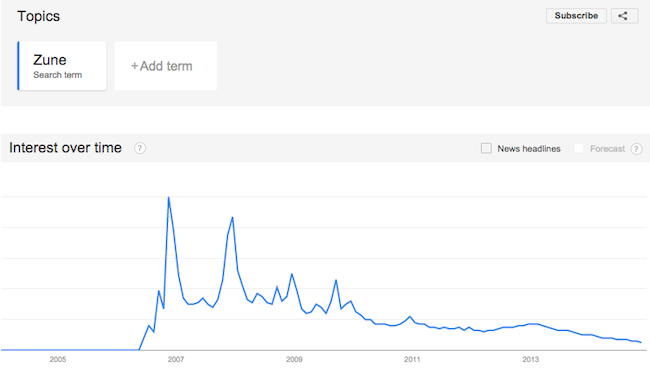 Now, to be fair, the Zune wasn’t a total disaster. According to tech journalist Farhad Manjoo, its development actually went on to help Microsoft in the long run.

And, at the end of the day, the Zune’s lack of adoption -- and sales -- wasn’t due to it being a crappy product; And it wasn’t due to a lack of marketing (Wikipedia has a pretty good write-up on all the tactics they used).

Manjoo has the answer:

“Microsoft’s player is just as good as an iPod -- it performed all of that device’s main functions pretty well. But there’s no way in which it’s better than an iPod. And that’s why it was doomed.”

Silly Bandz. They were those elastic, bracelet things. That were shaped liked animals … and other stuff.

Look, I’m not gonna lie to you here: These things were stupid. Silly Bandz was perhaps the worst hybrid toy-jewelry-office supplies product to ever come to market. And it only took millions of units sold before everyone caught on.

And then, blammo! See that steep, steep decline? That starts just after August of 2010. While interest (and sales) in Silly Bandz was soaring in the spring and summer of 2010 (the peak of the fad) it declined drastically before the 2010 holiday season. 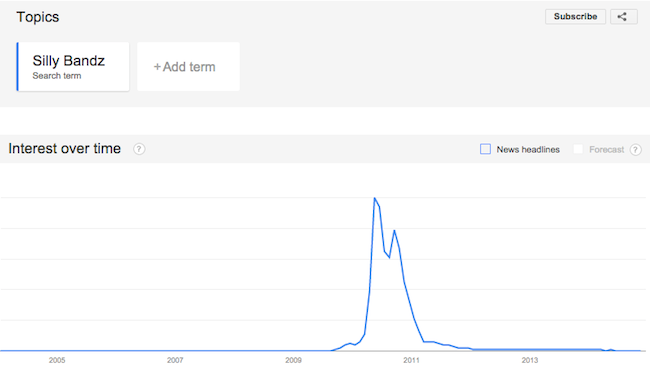 “Don't tell Santa, but the national infatuation with Silly Bandz and other shaped, silicone bands that were America's hottest fad in 2010, seems to have snapped,” reads a USA Today article from December 2010.

“With Christmas days away, many retailers say they have cut way back on the number of bands they carry and some have stopped selling them altogether.”

(Note: if you have any innovative ideas around how I … I mean my friend, uh, Jimmy can use my … I mean his stockpile of Silly Bandz, please write them in the comments section below.)