6 Ways Your Bedtime Routine Is Wrecking Your Work

Last night, I began to read an excellent novel right before I went to bed. The plot twists! The engaging dialogue! The cliffhangers! It was a great read. But when I finally went to put the book down two hours later, I was completely wired and nowhere near sleep, and I wasn’t too productive the next day.

I always thought it was a good habit to read before bed. Was I wrong?

Kind of. I had failed to take my own advice -- to do something mindless before bed -- and had instead remained engaged in something that was mentally stimulating, instead of something that helped me wind down. Stress is stress, whether its source is work or a fictional heroine who won’t leave her unfaithful husband. And that stress is responsible for 33% of adults losing sleep.

But my story shows that external stressors aren’t always to blame. Sometimes, our own routines are getting in the way of our productivity, especially when it comes time to settle in for the evening. It’s not easy, but with a little recognition and behavior modification, your bedtime routine can go from wrecking your work, to enhancing your productivity.

You're Not Sleeping Enough, and Your Bedtime Routine Could be to Blame

As you may have guessed, we are faced with a sleep deprivation epidemic -- 34.8% of U.S. adults sleep less than the recommended minimum of seven hours each night. And it’s getting expensive. In the U.S., the lack of productivity caused by sleep loss costs employers as much as $411 billion a year.

Less than seven hours in one night is what the CDC calls “short sleep”: a term we’ll use throughout this post. Among such side effects as high blood pressure and diabetes, short sleep can also lead to “frequent mental distress.” In other words, it can really mess up our work, and life in general.

On top of that, short sleep is linked to a higher probability of obesity, probably due to its correlation with poor eating habits. When you’re sleep-deprived, you’re more likely to mindlessly eat or make less-than-healthy food choices. But we also eat poorly when we’re stressed, and when we’re stressed, we don’t sleep well. All of these behaviors are linked and, ultimately, are leading to this epidemic of exhaustion.

That network of cause-and-effect does more than illustrate that you’re probably not sleeping enough. It shows the complexity behind why you’re not sleeping enough, which is where your bedtime routine comes in. So let’s explore some of the “why”s. Once you’re aware of them, you can fix them.

6 Reasons Why Your Bedtime Routine Is Wrecking Your Productivity

1) You’re eating a bunch of crap (and probably too late in the day).

In addition to short sleep causing bad eating habits, the same thing works in reverse -- diets high in saturated fat and carbohydrates, for example, have been linked to lower sleep quality. Plus, our tolerance for glucose decreases later in the day, so eating late at night can also throw off our circadian rhythm, the biological sleep-and-wake pattern of humans.

But willpower is hard -- and as my colleague Mike Rehahan once told me, it depletes as the day progresses. So, the later it gets, the more tempted we are to indulge in comfort food that we don't have to cook ourselves. After a long, tired day, it's a recipe -- no pun intended -- for disaster. You're not just more likely to indulge. You also risk depriving yourself of quality sleep, creating a vicious cycle of exhaustion.

Here’s where planning ahead can tremendously help. When the weekend rolls around, all we really want to do is watch Netflix and shop online. But setting aside two hours on Sunday afternoon to cook meals for the week can help preserve your willpower on those late nights.

2) Sleep isn’t in your schedule.

When our days are already so overbooked, it seems ridiculous to schedule something like sleeping. But it’s called a routine for a reason -- “setting a pattern of going to bed at the same time each night and rising at the same time each morning,” according to the CDC, is key to sleeping well.

Last year, I shared a technique I use called time blocking. It's the formal term for my habit of creating calendar events for everything -- getting dressed, working out, and feeding my dog. But when I realized that I was slipping into the bad habit of being liberal with my bedtime, I knew that I would need to schedule time to turn off my electronics, too. 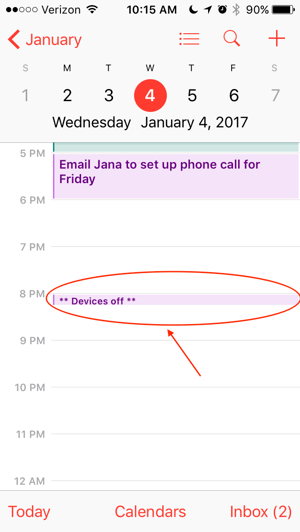 When I asked my team to share the bedtime habits that mess with their productivity, HubSpot Director of Marketing Emma Brudner replied, “Falling into the rabbit hole of the internet for hours.”

She’s not alone -- I have a bad habit of turning a simple search for a carbonara recipe into an hours-long research session on the culinary arts. And when that happens, my desired bedtime falls to the wayside.

That said, too much screen time before has other impacts on sleep quality, which we’ll discuss later. But scheduling a time to unplug can prevent those evening hours from wasting away. Depending on your bedtime, try programming a recurring calendar event to shut down two hours before you actually want to get to sleep for Monday through Wednesday. As it becomes habitual, start adding additional nights.

3) You’re planning your next work day at home.

I’m a big believer in the separation of home and office. Even when I work from home, I have a special space set aside to attend to my tasks -- every other area is an off-limits, no-work zone.

That accomplishes two things. First, it helps to keep certain distractions out of sight while I’m working. And when I’m not, having a something like a designated “weekend chair” keeps me from checking work email when I should be recharging -- as 50% of us are wont to do.

That’s why I also believe that all work-related tasks, including planning for the next day, should be limited to designated work spaces only. Thinking about that seemingly endless schedule can cause some anxiety, which you don’t want to bring into a place that’s designated for personal time -- especially at a time of day when you’re supposed to be winding down.

It might mean staying at the office a bit later, but planning your next day at a designated workspace can help maintain your home and sleeping areas as a stress-free sanctuary. Try it tonight -- chances are, you’ll be glad you left your work at work.

4) You’re putting off morning stuff until the morning.

We know -- when else would you do morning things?

But my colleague, Sophia Bernazzani, stresses the value of getting certain morning tasks done in advance, and she suggests taking “15 minutes to lay out your outfit, pack your lunch, and prep your coffee” the night before.

If you’re not a morning person, she explains, “decision-making abilities are limited -- so you should save them for work.” So, completing these items ahead of time not only gives you the peace of mind of having them done -- but also, it frees up a bit of time in the morning to sleep more, work out, or meditate, which is shown to lower stress levels by 31% and increase energy throughout the day by 28%.

We have instincts for a reason -- we’re built to instinctively seek out the things that will help us survive. Those are represented in Maslow’s hierarchy of needs, which includes sleep at its baseline.

It’s very meta, but stressing over a loss of sleep will only make you less likely to fall asleep, since -- say it with me -- stress causes sleep loss.

But when you can't get that stress off your mind, write it down. It makes sense that journaling before bed has shown to improve sleep quality -- it gives your troublesome thoughts somewhere else to “live,” rather than being mentally recycled when you’re trying to quiet your mind.

We’re starting to feel a bit like a bunch of broken records with this one -- yes, we harp away about ditching the screens before bed. And yet, nearly half of us continue to use our smartphones before bed.

But if you’re getting as sick of reading about it as we are of nagging about it, here’s a quick rundown, courtesy of Harvard:

Seriously. Put the screens away before bed.

And if you absolutely must look at your screen close to bedtime, consider investing in an app that will adjust its blue light depending on the time of day, like f.lux or PC SunScreen.

Give It a Rest

Our cultural sleep deprivation might make things look a bit bleak. It’s causing us to be grossly underproductive, which is causing our collective employers to lose a lot of money. Not only that, but it’s making us sick.

But we hope this post emphasizes that it doesn’t have to be that way, and that our bad bedtime habits can be modified. Don’t try to tackle all of these things at once -- start with the one that’s easiest for you to change, and once you master it, slowly work your way through the list.

Consider the fact that people who sleep six hours or less each night lose about six days worth of productivity each year. When you feel tempted to stay up late, ask yourself, “What could I do with six extra days?” Let yourself dream -- it’ll be worth it.