The Psychology of Ecommerce: Why Your Loyalty Program May Not Build Loyalty

Loyalty rewards programs are a staple of retail and ecommerce brands, but what if they’re doing more harm than good? At their most basic, loyalty programs allow customers to accrue points or punch cards until free items or discounts are earned. But what if sometimes a simple “thank you” is all you need?

Here’s the problem with a loyalty program that offers rewards of some monetary value: buyers often find the amount trivial. As in, why even bother? Consider for a moment the price of a fancy coffee. Five dollars sounds about right. Now, the seller of this fancy coffee hands over a punch card when someone buys, and that punch card allows for the reward of a free fancy coffee after ten purchases. Sounds pretty straightforward, until you realize the coffee shop is essentially giving buyers $0.50 as a “thank you.”

Framing is everything! You’re probably not going to turn away that free coffee, but there’s a good chance you won’t feel as though the coffee shop actually appreciates you when they’re pouring it. Why? Because sometimes a sincere “thank you” goes a lot further than a $0.50 reward. You'll feel more valued if you're working towards those stamps for a free coffee, rather than $0.50 back on your purchase.

The Proof in Numbers

A recent study asked hotel guests to rate how appreciated they felt upon receiving acknowledgment from the hotel. Part of the guests received a sincere thank you note, while the other part received $0.05 (yes, five cents). The recipients were to rate their feelings on a scale of one to seven. Those who received a verbal thank you ranked their feelings of appreciation at 5.6, while those who received the small monetary gift said they ranked the gesture of appreciation at 4.4. 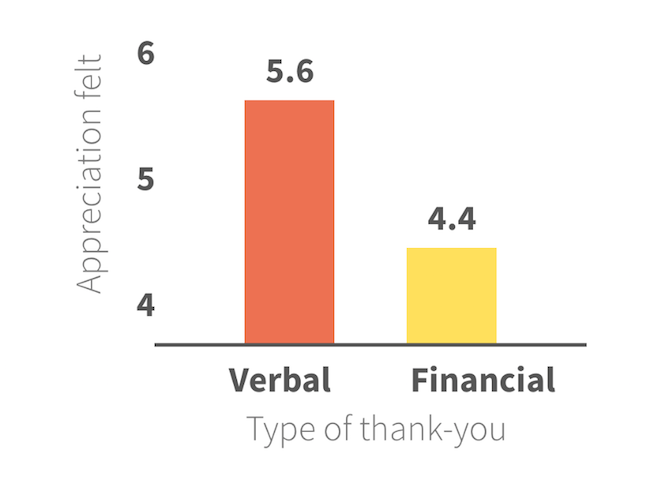 Well, then. Of course, it’s easy to glean one fact from this particular study: the smaller the monetary gift, the more trivial consumers will consider it to be.

How Much Is Enough?

So, if you simply have to give a larger reward for buyers to feel appreciated, how large are we looking at? Another group was split into sections, with some receiving a verbal thank you, and the rest receiving varying percentages of their purchase price as a reward. 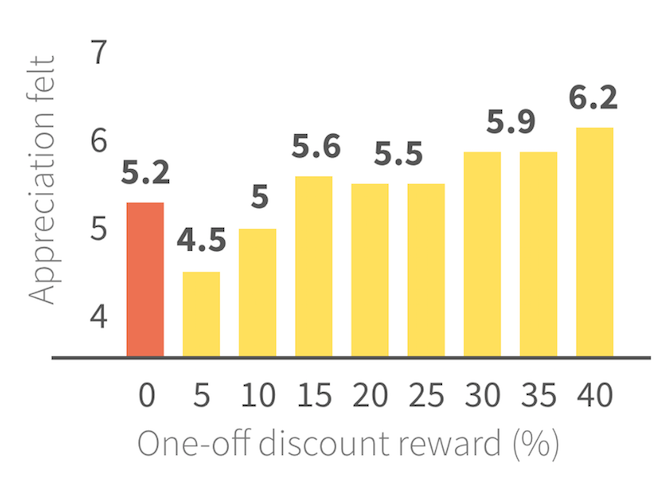 What Does This Mean for Your Loyalty Program?

Consider a points system where customers are rewarded for activities besides purchases and work towards a variety of rewards. For example, you can incentivize activities like leaving a review or sharing something on social media. In return, you can give them early access to sales or free shipping over a certain threshold.

There is one reward that may eclipse even the verbal thank you. Remember when we discussed the Noble Edge Effect, where consumers are more likely to support businesses with a social conscience? Consumers love the chance to give back, which is funny because that’s exactly what you’re trying to do for them, isn’t it?

The final study shows that consumers who are allowed to give their small financial gift to a charity will feel almost as appreciated as those who just get a verbal thanks. You get even more than their appreciation, too, since those buyers will see you as a socially conscious company and resolve to support you as often as possible. This one seems like a win-win, right?

In truth, balancing rewards, customer loyalty, and your genuine appreciation can be difficult. Pay attention to what your customers really want and then give it to them. Remember that loyalty goes both ways—they want you to be loyal to them, as well.