In video marketing, choosing the right soundtrack can be the difference between a video that grips your audience from start to finish and one that they can barely get halfway through. 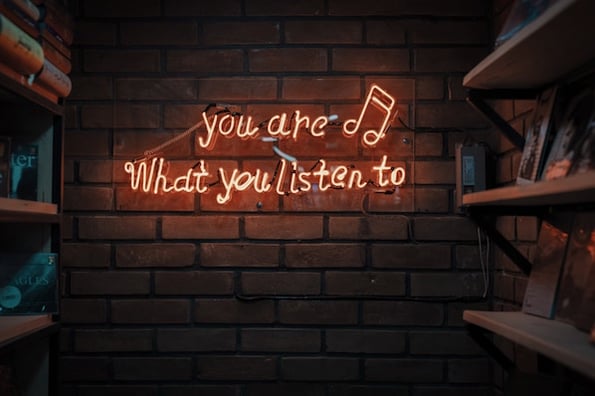 Play a fitting soundtrack or jingle in your video, and you can grab your audience’s attention and evoke the specific emotions and feelings you want them to associate with your brand. Neglect the musical aspect of your video, and people will think less of your brand.

In a 1994 study that tested music’s effect on brand attitudes, half the participants watched an apple juice commercial with music while the other half watched it without music.

Music can make your videos much more captivating, impactful, and, in turn, convincing. Whether you’re creating fun social media videos, persuasive product videos, or even serious training videos, music can separate your video from the rest of the pack.

In the video marketing world, though, you usually don’t have a team of musicians you can tap into whenever you need a hit soundtrack for your next video. You have to rely on music websites that provide stock songs. But a lot of these websites charge a royalty fee for each track they offer, which most small video marketing teams don’t have the budget for.

Fortunately, we found the nine best royalty-free music sites that provide high-quality music and can help you make the perfect soundtrack for your next video.

Owned by Shutterstock, PremiumBeat offers one of the most diverse and sizable collections of royality-free music on the internet. With the help of their own music industry experts, they’ve curated over 10,000 tracks that you can segment by genre, mood, artists, instruments, beats per minute, and duration. Their music experts also curate an Editor’s Pick playlist that has 857 of PremiumBeat’s best tracks to help you make the best possible soundtrack for your videos.

By collaborating with some of the most talented musicians in the industry, Epidemic Sound’s tracks are featured on YouTube and Facebook videos that rack up over 20 billion views each month. Epidemic Sound has curated over 725 albums of royalty-free music, spanning from genres like “Corporate” to “First Snow”, allowing you to create diverse and high-quality soundtracks.

Artlist partners with some of the best indie artists to create original tracks, helping companies like National Geographic, Microsoft, and Toyota make video soundtracks. They offer thousands of tracks that you can filter by mood, theme, genre, instrument, tempo, and duration. Artlist also curates themed collections of their partner artists’ tracks and spotlights their albums, too.

Music Vine collaborates with over 160 independent musicians to produce more than 2,500 tracks that you can segment by style, mood, energy, vocals, and duration. They also curate collections for particular themes in filmmaking and video production. You can filter them by vibe, theme, genre, and environment. Additionally, Music Vine dedicates a section of their website to their artists, letting people follow them and explore their music.

Soundstripe partners with over 80 artists to produce songs that you can filter by mood, genre, pace, instruments, key, vocals, duration, and beats per minute. They’ve also curated over 50 playlists that span from genres like action & sport to weddings.

On Soundstripe, you can also create an account, follow artists, playlists, like songs, and create your own playlists. If you need sound effects for your video, Soundstripe offers 29 categories of sound effects, ranging from construction to sci-fi.

Filmstro not only offers royalty-free music that spans over 65 different categories, like mood, film & video genre, music genre, and instrumental palette, but they also let you customize each track by its momentum, depth, and power. This gives you infinite creative possibilities to choose from when you create your video’s soundtrack.

Pond5 offers one of the largest royalty-free music libraries in the world. With over 500,000 tracks in 36 different genres spanning from Hawaiian to action, you can make music tracks for almost any video project.

ccMixter has one of the most thorough processes for creating free music out of any royalty-free music website. They collaborate with musicians who upload original samples of their instrumentals, singers who upload original acapella recordings, and producers and DJs who mix the music together to create free tracks for your videos. With over 120 original tracks for film & video, commercial projects, and video games, ccMixter can help you make a truly creative video soundtrack.

With over 300 tracks in the genres of acoustic, folk, cinematic, corporate, pop, electronica, urban, groove, jazz, rock, world, and more, Bensound provides plenty of musical options for your video’s soundtrack.