Something Big Is Happening With Snapchat: Why Businesses Shouldn't Wait to Get Started

There's a funny pattern of awakening that tends to happen when a technological advancement sneaks up on us. It starts with a mess of confusion.

We don't understand the technology or its purpose: "I don't get Twitter. Why would I want to know what you had for lunch?"

It then evolves into miscategorization: "The iPhone is actually a pretty crummy phone."

We get so caught up in definitions, we almost miss the larger leap that's occurring: "Why would people use messenger apps when you can just text?"

Then, finally, we get it: "The iPhone is not a phone at all. It's an everything device. And Twitter is not about lunch. It's about removing the barriers to real-time publishing."

While we're busy missing the big picture, a rapidly growing niche of early adopters is diving in. Early adopters don't get distracted by the need to categorize or define the technology. They just use it. And in repeated agenda-less use, the bigger picture becomes clear.

This same pattern is happening today with Snapchat.

Hang with me. Don't roll your eyes just yet. I'm going to pay it off. I've been a Snapchat doubter for a while now. Like many others, I relegated it to a fad or a niche service for a subset of a subset of the population. I'm beginning to realize I was wrong.

Snapchat is Shedding Its Skin

First, the basics. Snapchat is a one-to-one and group messaging app that has more than 100 million daily active users. Long classified as an app in which teenagers exchange goofy self-destructing videos, Snapchat is beginning to shed its skin and evolve into something new. Last week, Snapchat announced a 2.0 version with a slew of new features, some of which will reshape the purpose of the app altogether. First, let's go through the features:

On their own the features are interesting, but it's the message behind the features that really caught my attention. Together, these features amount to a very clear benefit: The removal of limits to how you communicate with others remotely.

Think about it: Every other app or device we use for communication requires a certain category or format of that communication. Phones are great for long-form audio. SMS is great for text and sometimes images. Other messenger apps are great for short form messages and transactional conversations. But before this release, no single app or device optimized for all the ways humans communicate: long form, short form, audio, video, text, photo, and drawing.

Which means that Snapchat, for now, is actually pretty special.

Snapchat Wants to BE Your Phone

TechCrunch picked up on this immediately. In a review of the new Snapchat features, TechCrunch called the app social media bedrock, saying:

Photos that self destruct in 10 seconds aren’t even the point of Snapchat anymore. With today’s launch of Snapchat 2.0, Snapchat wants to BE your phone.”

But, I already have a phone. It's the larger black box that contains Snapchat and the other apps I've downloaded. Sure, that's true. But think for a moment about all the individual apps you'd need from within that phone to equate what Snapchat now enables you to do in one.

"It lets private conversations morph between mediums depending on what users want to show or tell," explains TechCrunch editor-at-large Josh Constine. "Snapchat is positioning itself as the most vivid, human way to chat.”

And it's doing so in a single, simple interface.

Last fall, Designer Tony Aube wrote a fascinating essay -- "No UI is the New UI" -- which  asserts that to date, much of remote human interaction has taken place through the filter of some sort of user interface. However, messaging apps are moving us toward a near-invisible UI. Aube went on to say:

What make [messaging apps] special is that they don’t use a traditional UI as a mean[s] of interaction. Instead, the entire app revolves around a single messaging screen."

That screen, which can now nimbly move between image, face-to-face, audio, and other forms of communication, removes some of the technical congestion found in other apps -- congestion which can cloud and limit the experience.

"We’ve learned a ton about how people talk, but our goal remains unchanged," Snapchat explains in its launch post. "We want Chat to be the best way to communicate -- second only to hanging out face-to-face."

Do You Want a Side of Fries With That Hype?

It's easy to read all of the excitement over the new Snapchat marketing features and think we've all been blinded by a good PR team. But this actually isn't about Snapchat at all. Rather, it's an observation on how the systems we use to communicate are evolving.

One of the best explanations I've seen of how a single technology gains adoption and in turn advances society is the Gartner hype cycle. Here it is, as illustrated by, Luc Galoppin: 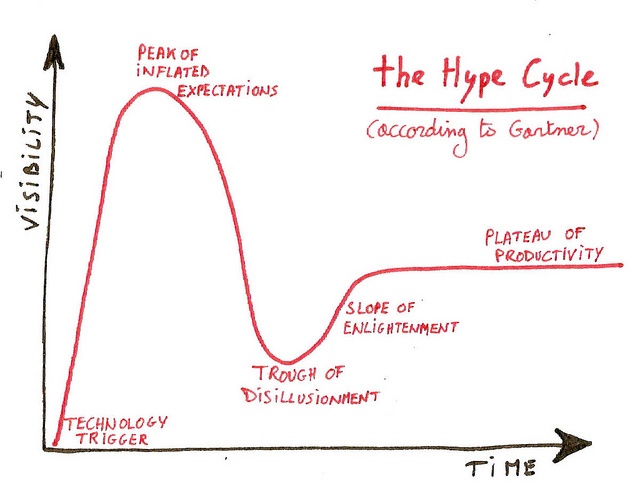 Why Should Businesses Dive in Now?

I'm not going to sit here and tell you your audience is on Snapchat. In fact, they might not be ... yet. But there is a benefit to wading into this emerging channel early.

Below is an illustration -- by Luc Galoppin (and annotated by me) -- of the standard adoption curve in which products and technologies go through on their path to ubiquity. Note: Snapchat is currently at the tail end of the early adopter stage.

Early adopters are both impressive and essential to technological advancement. Namely because early adopters don't feel the compulsion to classify new technologies. They just want to get in and use them. Sometimes in doing so, they create new use cases that the app inventors didn't even think about. In turn, early adopters shape second and third iterations of products, and have shaped this latest release from Snapchat. Behavior precedes strategy. And strategy that natively understands that behavior is all the more effective.

You won't necessarily understand the potential of Snapchat by reading about it. You have to get in there, follow people, and use it. So even if your audience isn't quite there yet, there's a case for trying it out with the early majority ... before the late majority arrives. That's what we did.

Want a starting point? HubSpot just launched our own Snapchat account. You can start learning how companies use the app by opening Snapchat and searching for: HubSpotinc.