More than 75% of marketers believe their commitment to content marketing will continue to increase over the next year. This isn’t surprising when you consider the return: Companies that have adopted content marketing techniques see conversion rates six times higher than those who haven't.

When paired with data-driven content, an aggressive promotions cycle can increase your chances for top-tier placements -- and these placements arguably have the biggest impact.

Powerhouse publishers such as The Huffington Post and The New York Times already have large, built-in audiences across a variety of verticals, but it's those publishers' level of engagement that's truly valuable.

Which domains have the most engaged audiences in five verticals: women, politics, business/finance, science, and technology? My team at Fractl, in conjunction with BuzzStream, wanted to find out -- and we found out some really interesting stuff.

To determine the top publishers, we used BuzzSumo to retrieve the sharing metrics on more than 30,000 relevant articles between May 2014 and April 2015 relating to the five verticals mentioned above. In total, these articles earned more than 58 million social shares. We used BuzzSumo to retrieve the top 1,000 articles in each vertical that were published between May 4, 2015 and April 30, 2015 as well.

With this data, we identified the 10 publishers in each vertical with the highest number of total shares -- and learned a lot about content promotion along the way. In this post, we’ll walk you through six key takeaways from our findings that'll help you maximize outreach during your next promotions cycle.

1) The Huffington Post is the only publisher to make it into all five verticals.

Although it was arguably the most popular publisher overall, The Huffington Post was only listed as one of the top three publishers in all five verticals. Additional findings revealed:

Another interesting insight comes from politics, which was dominated by two conservative-leaning publications: Headline Politics and 2012 Republican presidential candidate Herman Cain’s website, caintv.com. Collectively, these top two publishers earned more than six million total shares -- nearly 95% more shares than the third leading publisher, The Huffington Post. And in terms of the total within the entire vertical, the two publishers earned more than 85% of the shares.

The women’s vertical did incredibly well. The top two publishers (The Huffington Post and BuzzFeed) earned up to 63% more shares than the top performer in the second-highest performing vertical (politics). When compared to the lowest-performing vertical (technology), although The Huffington Post was the top publisher again, it earned 92% fewer shares than its posts within the women’s vertical.

4) Native advertising earned the most shares within two verticals.

Paid content had a compelling presence in the top three posts for business/finance and science. The highest-performing article in both verticals were paid posts. The impact in the science vertical was so strong that it actually affected the rankings.

National Public Radio (NPR) ranked fourth in overall shares within the vertical thanks to its paid post, which accounted for more than 55% of the publisher’s total shares in the science vertical. If this article was omitted, NPR would fall to seventh.

The paid post within the business/finance vertical had a similar effect -- although not quite as large. The highest-performing article belongs to The New York Times and makes up more than 35% of that publisher's total shares within the vertical.

For both of these high-performing paid posts, though, there is one unifying thread: The content is stellar. The New York Times post was created for Cathay Pacific, an airline based out of Hong Kong, through the publisher’s very own Brand Studio. The NPR article was created for OZY, a news site that frequently partners with multiple publishers within the science vertical.

The takeaway from these posts? Paid posts can succeed in engaging audiences, but you have to make sure the content provides value to the reader.

5) Although daily engagement varies across verticals, the majority earn their lowest shares over the weekend.

When it comes to the perfect day to share content, there isn’t a one-day-fits-all formula. Some verticals tend to earn high shares during the middle of the week (e.g., technology) while others do better on Mondays or Fridays (e.g., politics and science). However, low shares on weekends were a common trend for every vertical. 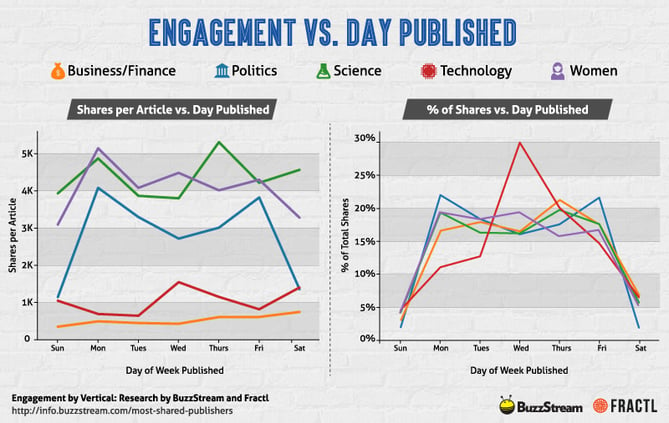 6) Technology and business/finance had the most representation on other social networks besides Facebook.

The second most popular social network for each vertical was Twitter, followed by LinkedIn, where business/finance outperformed technology. As for the remaining social networks, each vertical earned only 2% of its shares through Google+ and fewer than 1% through Pinterest. 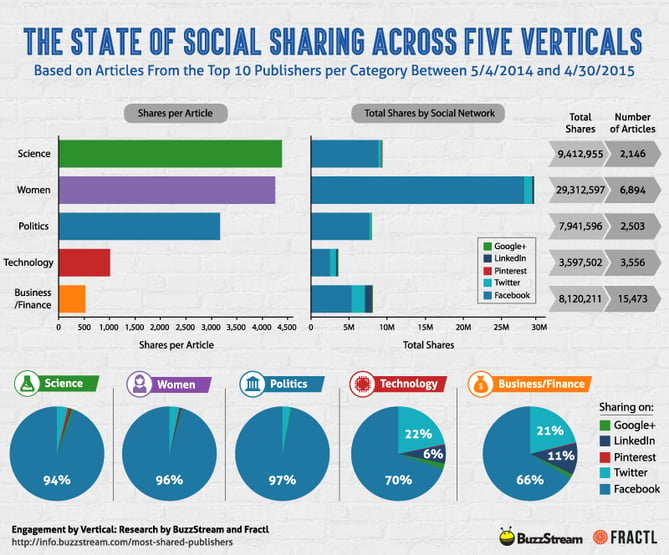 While this study found high engagement among the women’s vertical and a lack of diversity across the landscape of sharing for most verticals considered, keep in mind that this is all subject to change as the digital publishing community continues to grow, with new niches forming their own engaged communities every day.