No One Trusts Social Media, but They'll Keep Using It Anyway [New Data]

I'll just come right out and say it: The internet has a massive mess to clean up.

You may have heard about it. For instance, earlier this month, you may have followed the testimony from senior leaders at Facebook, Twitter, and Google that outlined, in detail, the quantity and nature of ads purchased and published on their platforms by operatives in Russia and other foreign states.

And yeah, of course -- we all have our take on it, and many of us are clamoring to share it.

But my colleague, HubSpot's own research boss Mimi An, had a better idea: Let's ask everyone else what they think.

And so, in light of these recent events, An's team ran a consumer study to gather sentiment data from 1,000 U.S. adults to find out just how they feel about this big, steaming internet mess.

Here are the results.

A Few Notes on the Data

During the week of October 30, 2017,  three major online content-sharing and discovery platforms -- Facebook, Twitter, and Google -- testified before representatives of the House and Senate Intelligence Committees. Because those were the three companies present for the testimony, the questions asked of survey responses focused only on them, despite the possible involvement of other social media networks in ongoing election interference investigation.

When we distribute surveys, we describe in as much detail the exact issue that we want participates to respond to. The language used to phrase the survey questions describes what has taken place so far in a continuously developing situation as factually as possible within such constraints of online surveys as character limits and anonymity -- and, therefore, an inability to follow up with respondents.

How Russian Ads Have Forever Changed Our Perception of Social Media 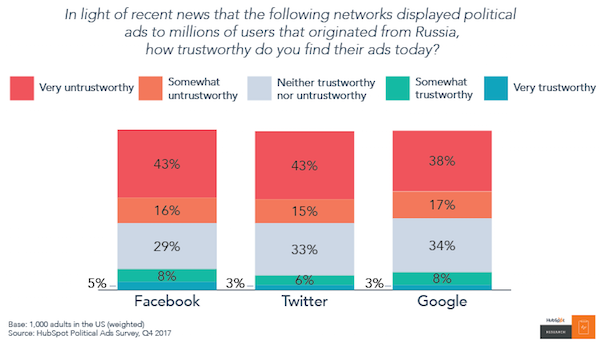 On average, close to half of all respondents would describe ads these platforms as "very untrustworthy," compared to an average of 5.5% who find them to be either somewhat or very trustworthy. Note that this is the sentiment around the ads appearing on these platforms, and not the platforms themselves.

2. Twitter's response generated the least satisfaction, but the sentiment is low across the board. 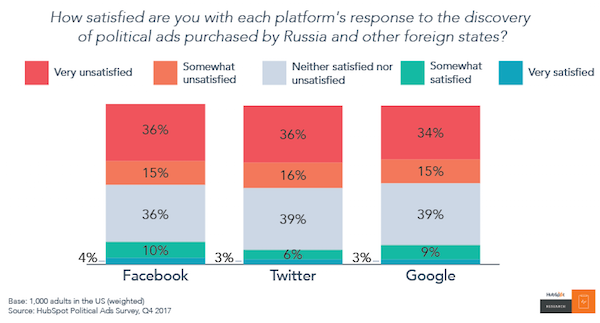 While respondents were generally unsatisfied with network responses to political purchases on their respective platforms, it seems as though they have the least faith in Twitter. (The score for "somewhat satisfied," for instance, was three percentage points lower than those for Facebook and Google.)

It's worth noting that Twitter first testified before U.S. Congress about this same issue prior to the November events were all three companies were present, when it told representatives that it roughly 200 Russian-linked accounts -- a figure that many found to be paltry and underestimated, including Senator Mark Warner, who called these initial efforts "frankly inadequate".

How much influence that initial testimony (and Congressional response) had on survey respondents is uncertain, but it is an important historical point in the context of the particularly low sentiment toward Twitter.

Although the rates of dissatisfaction are fairly equal across the board, this survey was administered prior to a Recode report that Facebook filed comments with the Federal Election Commission (FEC) that indicated its support of rules that would require the network to provide greater visibility and transparency around the political ads used on its site.

However, that support is limited in nature, in that Facebook only indicated that it would agree to these terms around ads pertaining to specific candidates, and not issues -- and a significant portion of Russia-bought ads during the 2016 presidential election concerned such highly-contested and somewhat divisive issues as gun control and immigration.

Google, on the other hand, filed comments with the FEC that actively requested more detailed guidelines around issue-based ads, requesting further direction as to how those within its industry can and should better approach organizations attempting to promote propaganda.

Twitter, meanwhile, did file but had little to say other than a request for the FEC to maintain awareness of the network's character limits when establishing rules.

3. Trust in social media networks has been eroded by the political ads controversy.

In addition to ad content appearing on content-sharing and discovery platforms, it would appear that trust has the platforms themselves. Facebook was particularly hard hit here, with just shy of half of saying that they find this channel to be less trustworthy.

However, an even higher amount of respondents answered with "none of the above," signaling the possibility of no less trust in any of these channels. That data is once again reflected with our findings in other areas of the survey, including respondents' plans to decrease or stop their use of social media -- more on that in a bit.

4. 77% of Americans believe platforms need to vet the ads they sell and display. 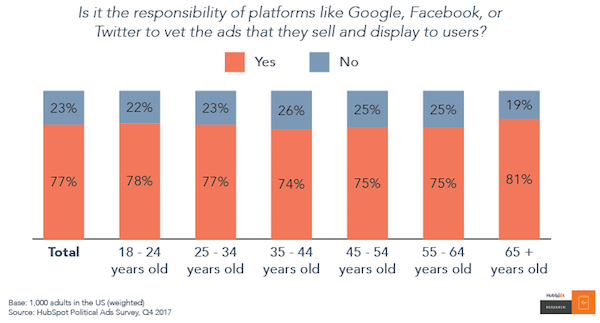 Across the board, respondents stated a strong belief that it's the responsibility of the platforms themselves to vet ad content purchased and displayed on their channels. An average of 77% of survey participants agreed with this sentiment, regardless of age, indicating that most social media users expect to see proactive changes in ad policies and best practices.

5. Though Americans are angry about the ads controversy, few plan on using the affected platforms less.

However, despite the general sentiment that these platforms are untrustworthy -- as are the ads displayed on them -- and need to do better about paid or promoted content, the same respondents have indicated that, for the most part, they don't plan to reduce their use of Facebook, Twitter, or Google.

In fact, despite being the least satisfied with Twitter's response to the political crisis, less than a quarter of respondents plan to use it less. That number is even lower for and only slightly higher for Facebook.

6. ... and, even fewer Americans plan to stop using the platforms altogether.

Even if some intend to momentarily step away from social media, over 75% of survey respondents say they plan to leave these Facebook, Twitter, or Google altogether.

The last of the three is particularly difficult to give up entirely -- after all, it's commonly referred to as a "search giant" for a reason. But even so, a noticeably small number of survey participants would consider ceasing all use of Facebook and Twitter, as well.

But what does all of this information mean? What does it say about our online behavior and habits, and what are the implications for marketers?

If nothing else, these numbers -- and where they almost seem to contradict each other -- illustrate a dependence on these contested channels.

Despite the overwhelming distrust in them, as well as the ad content published on them, survey respondents have no plans to curtail or cease using them -- perhaps because they need to use them for work (after all, we are marketers), or because they simply enjoy them too much to step away.

That speaks to the power and influence they hold over users day-to-day. We spend a significant amount of time on these channels -- about a third of Google's visitors are based in the U.S., and on average, we spend about 35 minutes each day on Facebook (for context, that's about 2.4% of the entire day). Thirty-five minutes may not seem like a ton of time, but when you think about how much time you spend on activities that are actually essential to your livelihood -- like eating, for example -- how does it compare?

The point is, the people behind this political content were likely aware of how much time we spend using the platforms where it was displayed. It's no wonder that 126 million Americans were exposed to it -- there's a good amount of content to be consumed in a mere 35 minutes.

The main message to marketers, however, is this: These platforms are extremely useful and effective. In fact, that's why people are highly concerned over the presence of Russian ads -- there's a very good chance that, if the intent behind them was to influence the U.S. presidential election in a certain direction, they worked. That's why these representatives from these platforms are being summoned before a federal body. This level of effectiveness is a big deal.

By no means is this to say that marketers should cease using these channels to promote content and build brand awareness. As I said: It's extremely effective and should continue to be used for growth. But with that effectiveness comes great responsibility, and that growth must be built with a commitment to transparency and truth.

That's how I see it, anyway.

As always, feel free to chime in. What's your take on this data? Let me know on Twitter, or weigh in with any questions you have about it.