What core qualities most accurately indicate you'll be a successful leader?

They aren't necessarily what you'd expect.

When you consider iconic leaders like Steve Jobs and Elon Musk, you probably think of charisma, unwavering confidence, and an insatiable desire to bring about transformative change.

But it turns out these oft-cited qualities are more exceptions than rules when it comes to defining great leaders. The best leaders actually possess a unique set of qualities that may seem counterintuitive at first.

We've compiled a list of five unexpected character traits and behaviors associated with successful leaders. Check them out below to see if you're on track to become an effective leader.

1) The best leaders doubt themselves.

Although it might seem counterintuitive, embracing self-doubt and learning to accept your insecurities can have a profoundly positive effect on your ability to lead. Self-doubt prevents us from taking too many big risks, helps us examine our own actions more critically, and enables us to make more realistic decisions.

But welcoming self-doubt into your life doesn't mean letting your inner critic tear you down at every turn. Tara Mohr, the author of Playing Big, says the key to using self-doubt to your advantage is learning to separate your negative inner critic from the voice of realistic thinking that keeps you grounded and pushes for self-improvement.

Self-doubt keeps our egos in check and prevents us from getting too comfortable in positions of power. Leaders who are open to tough questions about their own abilities are more deft at adapting to change and constantly improving themselves.

2) The best leaders don't try to be completely independent.

The conventional portrait of a leader would have you believe they're an entirely self-sufficient, aggressively independent breed -- fearless pioneers with the answers to questions you haven't even asked yet.

In reality, great leaders know they can't do everything on their own, and they don't try to. They forge meaningful connections with their team, seek conflicting opinions, and cultivate an environment conducive to everyone's success -- not just their own. 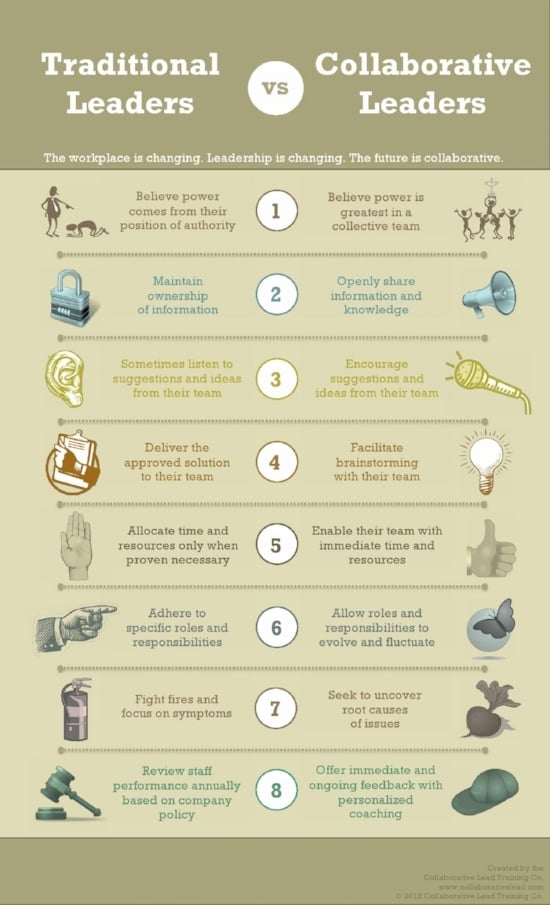 Leadership is too often thought of in terms of power and control, when in practice, great leaders know when to step back and let go of power and control. Managing employees means offering direction, guidance, and support -- not touting authority and supervising every detail.

Mark Boncheck, the CEO of Shift Thinking, thinks leaders can learn a lot about letting go from traditional military strategy. "Over centuries, the military has developed an approach to managing 'the fog of war,'" Boncheck wrote in Harvard Business Review. "Generals need to ensure alignment to the strategy, while soldiers need autonomy to respond to changing conditions."

To manage this tension between control and autonomy, Boncheck devised a two-part system intended to keep everyone on the same page without compromising their ability to respond to change.

The second part is the doctrine, which Boncheck says many leaders fail to account for. The doctrine is made up of the "principles [that] guide actions in support of objectives." In a business sense, the doctrine empowers employees to make independent decisions by telling them how to approach the company's goals, i.e., what behaviors are appropriate in pursuit of a goal.

When leaders communicate a doctrine to their employees, they don't have to constantly oversee employee activity. They can step back confidently knowing that their employees are well-equipped to handle any given situation with a guiding set of principles.

4) The best leaders are predictable.

Leaders are expected to be transformative, innovative geniuses who are constantly breaking new ground ... right? Wrong. A study from Google found that the opposite might be true.

When Google's human resources team dug into what qualities made leaders successful at their company, they found something surprising: The quality that best indicated whether or not a leader would be successful wasn't their extroversion, their propensity to stir up change, or even their IQ -- it was their predictability.

"If your manager is all over the place, you're never going to know what you can do, and you're going to experience it as very restrictive," Laszlo Bock, senior vice president of people operations at Google, said to Inc. "[I]f a leader is consistent, people on their teams experience tremendous freedom."

When leaders are predictable, the people they manage have the room to progress independently and make autonomous decisions without having to worry about feedback from left field. Employees who operate beneath predictable leaders don't have to brace themselves for abrupt changes or pivots in expectations. Instead, they are given "the mental space to do great work," as Bock put it.

5) The best leaders are open to outside influence.

We often judge leaders by how solid they stand by their opinions and principles, and how unmoving they remain in the face of challenges that threaten these beliefs. But the best leaders understand that being influenced by outside forces isn't a weakness, it's a key strength.

Organizational psychologist Roger Schwarz found the most effective leaders were those who were genuinely open to being influenced, and were transparent about how exactly they could be influenced.

"[W]e get much better results if we hear from and are influenced by those who are in different positions and have different perspectives, rather than relying only on the thoughts of those in power," Schwarz wrote in a recent Harvard Business Review article.

Schwarz explains that the most highly-developed leaders are fully transparent about what kind of information or arguments influence them. "At this level, you are a full partner in helping others influence you," Shwarz wrote. "You tell others what kinds of information will lead you to change your mind."

In this mindset, the best leaders approach challenges to their opinions and beliefs from the position of facilitator, rather than opponent. They help others understand why exactly they disagree, and how their opinion can be changed.

What unexpected qualities do you think great leaders possess? Tell us in the comments.

30 Leadership Behaviors You Need to be an Excellent Leader