31% of Tech Workers Say They Would #DeleteFacebook [New Data]

If you work in tech and haven't yet downloaded the app Blind -- well, you're missing out. 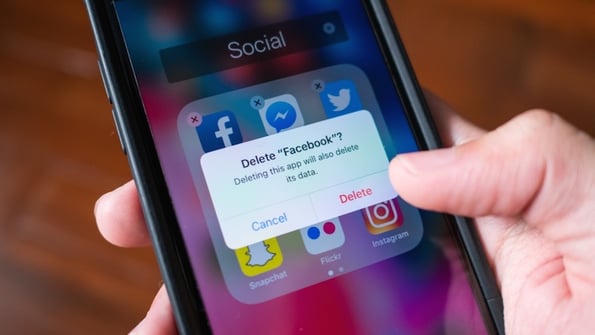 Blind calls itself "an anonymous community app for the workplace," where employees of various tech companies gather to namelessly ask questions, leave feedback, or start discussions about everything ranging from salary to industry gossip.

So when Blind surveyed its user base to find out how many tech workers planned to delete their Facebook accounts -- inquiring minds had to know what the results were.

The survey came in light of a recent scandal around when it was revealed that analysis and profiling firm Cambridge Analytica may have abused personal user data, which allegedly should never have been in its possession in the first place.

Among other responses to the allegations -- which included outrage, criticism, and the occasional lack of surprise among some -- the hashtag #deletefacebook began trending on Twitter, reflecting the widespread sentiment and desire to delete the app and one's account on it for good.

Blind decided to run a survey of its users to find out how much the #deletefacebook trend resonated among tech workers, collecting a total of over 2,600 responses between March 20 and March 24 of this year.

The responses were especially intriguing when broken down among Blind's top five tech companies, which were determined based on the highest volume of responses. Facebook's own employee responses were accounted for, with 2% of that base reporting it would delete the app. 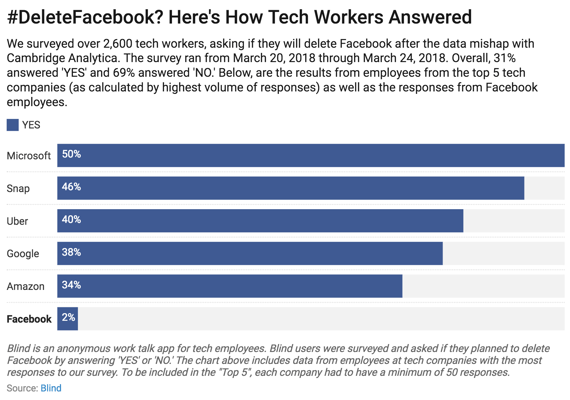 It's worth noting that the second-highest company responding "yes" to #deletefacebook is Snap Inc.: the parent company of Facebook's rival app, Snapchat, which the former has been trying to emulate by way of new features and capabilities for many years.

That began after Facebook's failed attempt in 2013 to acquire Snapchat -- and it's worth noting that Facebook also owns Instagram, which is arguably the most similar property to Snapchat.

Notice that ride-hailing app Uber ranks third -- reminding me of the 2017 trend to #deleteuber that came after a series of PR crises for the company. One of them was a business move that many interpreted to be Uber's capitalization on a U.S. executive order calling for a travel ban from certain countries.

Scores of people are deleting Uber after the company serviced rides at JFK airport while taxis were striking against muslim ban #deleteuber pic.twitter.com/D8cJMlxOxQ

It's also interesting to note that 38% of respondents from Google said they would delete Facebook, seeing as the company has faced its own backlash and negative headlines pertaining to user data in recent weeks, as well. In fact, when Facebook CEO was called upon Congress to testify on these events, he was invited to do so by some committees alongside Google CEO Sundar Pichai and Twitter CEO Jack Dorsey.

Note that Twitter is absent from the above graphic -- suggesting that response rates from that company weren't high enough to include in the top five.

Blind has informed us that Amazon had the highest response rate, with employees from that company accounting for roughly 11% of the survey's total base. Within that segment, 34% of Amazon employees said they would delete Facebook.

What Do These Survey Results Mean?

For those who don't work in tech -- just how seriously should these results be taken?

"There is a precedent for this sort of thing. Facebook makes a change or does something that is received negatively, and there is a lot of backlash in the press and among individuals," Andrews says. "I personally will not delete Facebook. It's at the forefront of technology and innovation, and I afford them some slack."

"This survey involved a tech-savvy audience that seeks anonymity so it can air its grievances about tech companies -- an audience that might be predisposed to dislike Facebook," Franco explains. "Tech workers are probably more likely to want to delete Facebook than the general population for similar reasons."

It's an interesting point. Similar to Andrews, I also chose not to delete Facebook, though I have deactivated on more than one occasion to take a break, prior to the Cambridge Analytica crisis.

HubSpot's Co-founder and CTO Dharmesh Shah also recently shared his thoughts and insights on the matter.

"I know I’m likely in the minority of my tech circle friends, but I have no plans to delete Facebook from my life."

And while seeing my full Facebook data file -- which may be in the possession of parties of which I'm not aware -- was weird, I'm inclined to believe my decision not to delete my account is  because I work in tech. After all, I spend my days reading, reporting, and analyzing news like this, which could be one reason I wasn't entirely shocked by the Cambridge Analytica news (call me "jaded" or "cynical," if you must).

Plus, I'll return to my earlier note about Facebook's ownership of Instagram -- as well as Messenger and WhatsApp. As Andrews pointed out, the survey didn't measure was how many of the people who said "yes" to deleting Facebook would also plan to delete its three umbrella apps.

For that reason, he says, "It's just hard for me to take people seriously when they say they'll delete Facebook."

But as Franco notes, we won't know for sure just how much stock to put into these survey responses until Facebook itself releases data and metrics on its user numbers, which he says the company traditionally does on occasions like earnings calls.

"The fact is, there are a ton of reasons not to delete your account, as Facebook has a strong product with a deep moat," he explains. "Doing so might ultimately be more of a burden to the user, considering their data are also being collected by a number of other tech companies."

And when that earnings call takes place -- we'll let you know what we find out.