The Future of Marketing: WordStream's Founder & ClassPass' CMO on Where Things Are Headed

Inbound marketing is about matching the way you market and sell with the way people actually want to shop and buy. And after reading the 2016 State of Inbound report, it became clear that inbound was beginning to change at a pace more rapid than anything we've seen before.

New technologies were being introduced. Consumers' habits were evolving. Things were different.

What does that mean for the future of this movement? Quite honestly, we believe that in five years time marketing and sales as you know it will no longer exist.

To help dissect some of these future trends, we invited WordStream Founder Larry Kim and ClassPass CMO Joanna Lord to have a discussion with HubSpot's VP of Marketing, Kieran Flanagan, via YouTube Live. This talk dives into what the future of inbound marketing might look like, as it relates to content, search, and ads.

Watch the video below to hear the full discussion:

The Future of Marketing: WordStream's Founder & ClassPass' CMO on Where Things Are Headed

If you didn't have a chance to watch the full YouTube discussion, don't worry. We've summarized both Kim and Lord's thoughts and input below to make it easy for you to distill some of the top takeaways.

How do you see technology changing the way people shop and buy?

According to Kim, the future of shopping online is going to be less about stumbling upon something in Google and more about customers actually expressing their preferences for brands. Marketers need to do more marketing. And that boils down to getting people familiar with your brand so that they favor you when it comes time for a purchasing decision.

If your first appearance is when a consumer finally decides to search for your products and services on their own, you're too late. People overwhelmingly click on the things they are familiar with, so you have to get them even before that.

Lord mentioned that when ClassPass first started, they spent a lot of time on the consideration phase and differentiating value props. Because consumers are far more informed, they're far more in control, and marketers really need to create that bias early. Of course it's about being where they want you to be, but it's also about connecting with them sooner.

What stood out to you most in the 2016 State of Inbound report?

One of the things that stuck out most to Kim was that inbound marketing and advertising don’t seem to be getting along that well. Advertising is seen as being overrated and annoying -- and that's really unfortunate because, like all channels, it's less about the medium and more about how you use it.

The big thing that stood out to Lord? Video as an emerging vehicle.

She went on to explain that video helps you tell a great story, but today, marketers might over-index on that being videos’ purpose: a dynamic, compelling way to tell a story. However, what came through in the different statistics in the State of Inbound report is that there's a stickiness to video.

According to Lord, marketers need to be thinking about multiple touch points along the video journey, and different ways to build infrastructure to support and track that effectively. Marketers can't just be ‘dabbling' in video at this point -- it has to be an all-in play.

Do you think people are frustrated with advertising because a lot of marketers are doing it poorly and not providing a great experience?

Lord admitted that a lot of advertising is, in fact, poor. A lot of people try to take historical advertising approaches and apply it on new platforms.

When it comes to this debate, Kim explained that he thinks we need to be pickier in terms of what it is we're advertising.

He went on to explain this example: If you have $1K to spend on social media advertising, and your blog puts out 10 posts a month, the worst thing could do is split the money up and use $100 to promote each post.

Why? Because some of them are going to be garbage, and one or two of them might be great.

Kim argued that what marketers need is a change in mentality. Instead of dividing the money equally, you should take the $1K and go all-in on the top performing post. Doing this will not only get you a much higher ROI, but ultimately it will help you appear less annoying in the eyes of those coming across it, as you're promoting stuff that people actually find interesting.

Do you think that video has a place across the whole funnel, or does it work better in one part of the funnel?

Lord explained that while it's probably very specific to the brand and the service or product they offer, video can be used in every part of the funnel. She followed that by stating that video is often more compelling in different phases for different brands.

For example, ClassPass is a lifestyle brand with a demographic of young urban women, which provides an opportunity to use video more often -- and in more phases -- than some B2B companies.

She went on to explain that one of the best places that video comes into play for ClassPass is actually in post-conversion nurturing for lifetime value, because it’s all about motivation and milestones, and that's the voice of a customer story.

According to Kim, the purpose of content marketing and advertising is to bias people. You want people to have happy thoughts about your brand and what it is you do, so later when they need to buy whatever it is you're selling, they favor you.

When it comes to the effectiveness of video, he thinks that the message you convey through video is more memorable, inspiring, visual, and dynamic than any other medium. And from that perspective, video content is orthogonal to the funnel, meaning you should be creating video assets for every stage.

While Kim doesn't think of bottom of the funnel or top of the funnel as being more important than the other, he does have a hard time with the costs tied to video production.

To avoid wasting budget, he suggests auditioning a lot your content to see what performs best -- especially in regards of engagement. Then, transforming only the top-performing stuff into video content. 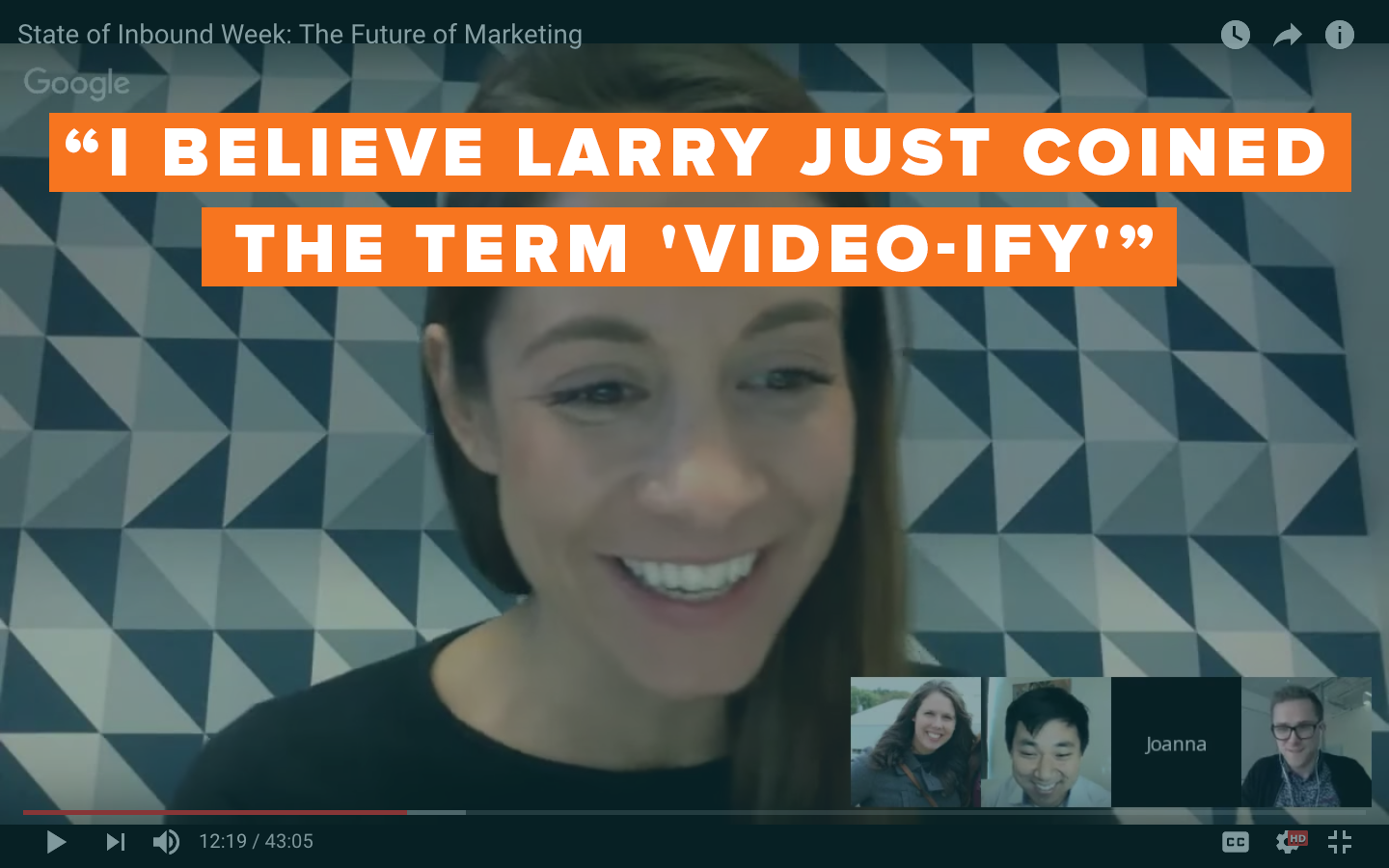 What big bets are you making at WordStream and ClassPass around marketing tactics that you think will be important over the next couple of years?

Lord explained that their top investment priorities are photography, video, and humanizing the brand.

People love the service when they when they sign up and when they try a class, but there's also a lot of noise in fitness, and there are a lot of great brands to compete with. Everyone is getting into health and fitness and wellness, which is why ClassPass' biggest investments are around differentiating the brand's point of view. And they way they see it, photography and video are their strongest bets in terms of bringing what's important to them and their audience -- living fully and spending time of experiences that nurture you -- to life.

According to Kim, one of the challenges WordStream has is that they've kind of tapped out the market of low-funnel people -- people who are actively searching for these types of pay-per-click advertising solutions.

So when he thinks of growth in 2017 and beyond, it's all about creating demand and awareness among people who aren’t actively searching for the products and services that WordStream sells. He explains that if you're just waiting for people to search, you’re not really growing your market -- you're just harvesting the demand of people who are already looking to buy that thing in the first place.

His goal is to create biases in people's minds earlier on, so that when the need arises for advertising solutions, they'll automatically think of WordStream.

What formats would you encourage marketers to invest in over the next 12-24 months?

According to Lord, the vehicle is important. And when it comes to vehicles and formats, video is going to be very important -- especially episodic content and snippet video.

She went on to explain that episodic content is the idea that there's a volume or a series to it. In other words, you're telling a story over a long period of time. It's a multi-touch approach, and that allows you to meet people earlier in the funnel, nurture them, and hopefully bias them along the way.

According to Kim, if you’re in the tech space, Medium is a fantastic outlet for content publishing and content syndication.

In the last six months, he was able to become the top 20th ranked author on Medium. (That's about a million views of his content every month.) The best part? He said it wasn't all that hard -- all he did was syndicate existing content. And Medium makes that easy with the help of its republishing tool.

In terms of time distribution, Kim went on to explain that he spends about 20% of his time creating content for external sites. However, he also urged that the worst thing you could ever do is abandon your blog, and that 70-80% of the content you create should still be going there. 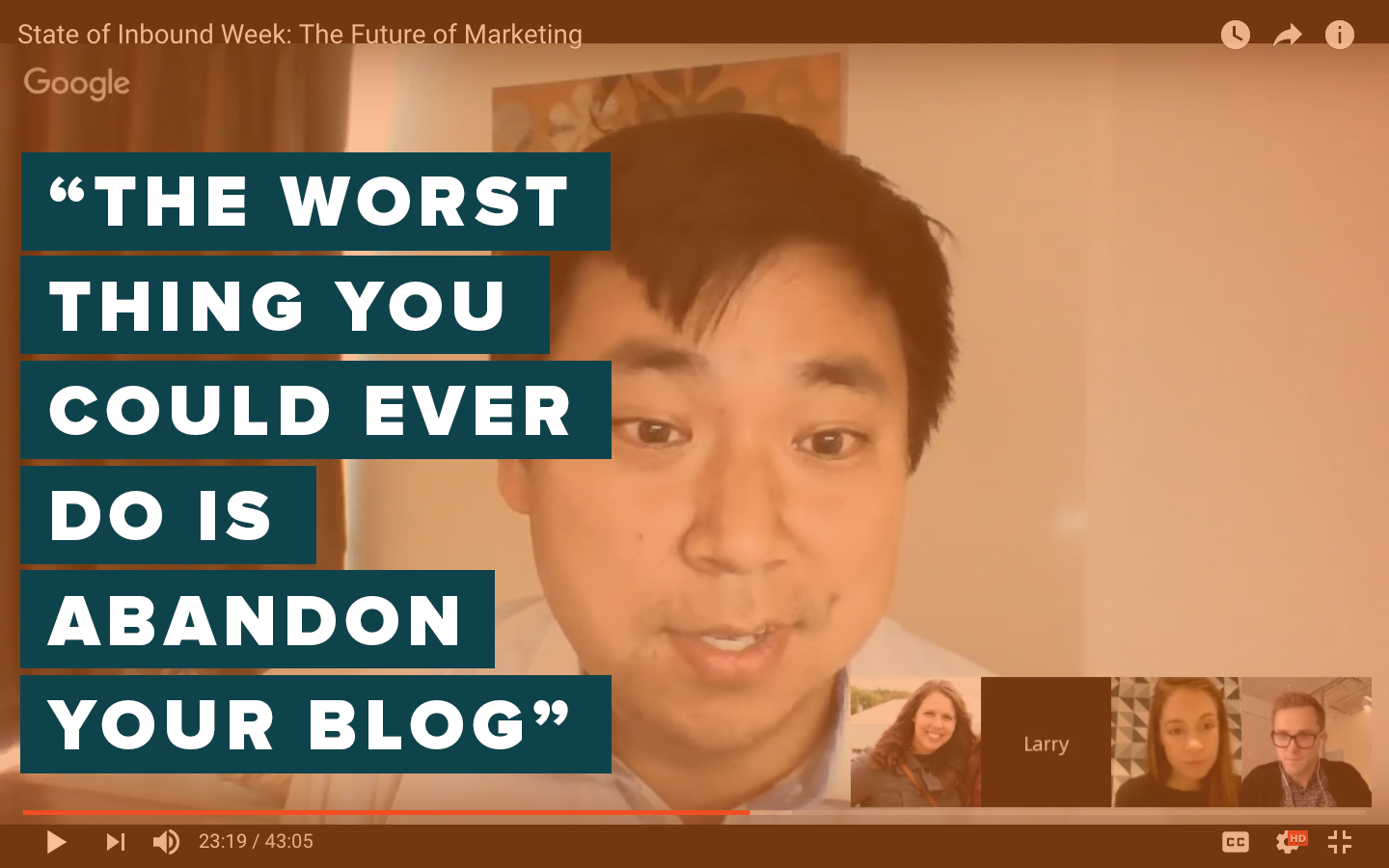 What evolving consumer trends will disrupt marketing the most over the next year?

One thing Lord mentioned that she is currently focusing on is this concept of being the backdrop to a consumer’s life. As she explained it, a lot of companies are thinking about the currency of time: How can you have enough value around your core product so that it's actually consuming more of someone's time?

ClassPass is primarily an app-based experience, but everything they’re starting to test in the product will be peripheral and adjacent to that, so they can earn the right to have more of someone's time. Part of that is thinking through the many times a person might need your brand or product in a day -- in other words, what are they hiring you for in their day? If you uncover that, you can build it into your product road map.

Lord also stressed the importance of personification. She asked the questions, "Who does your customer want to be?" and "What will they need to hire you for in 3-5 years if you do your core job right today?" 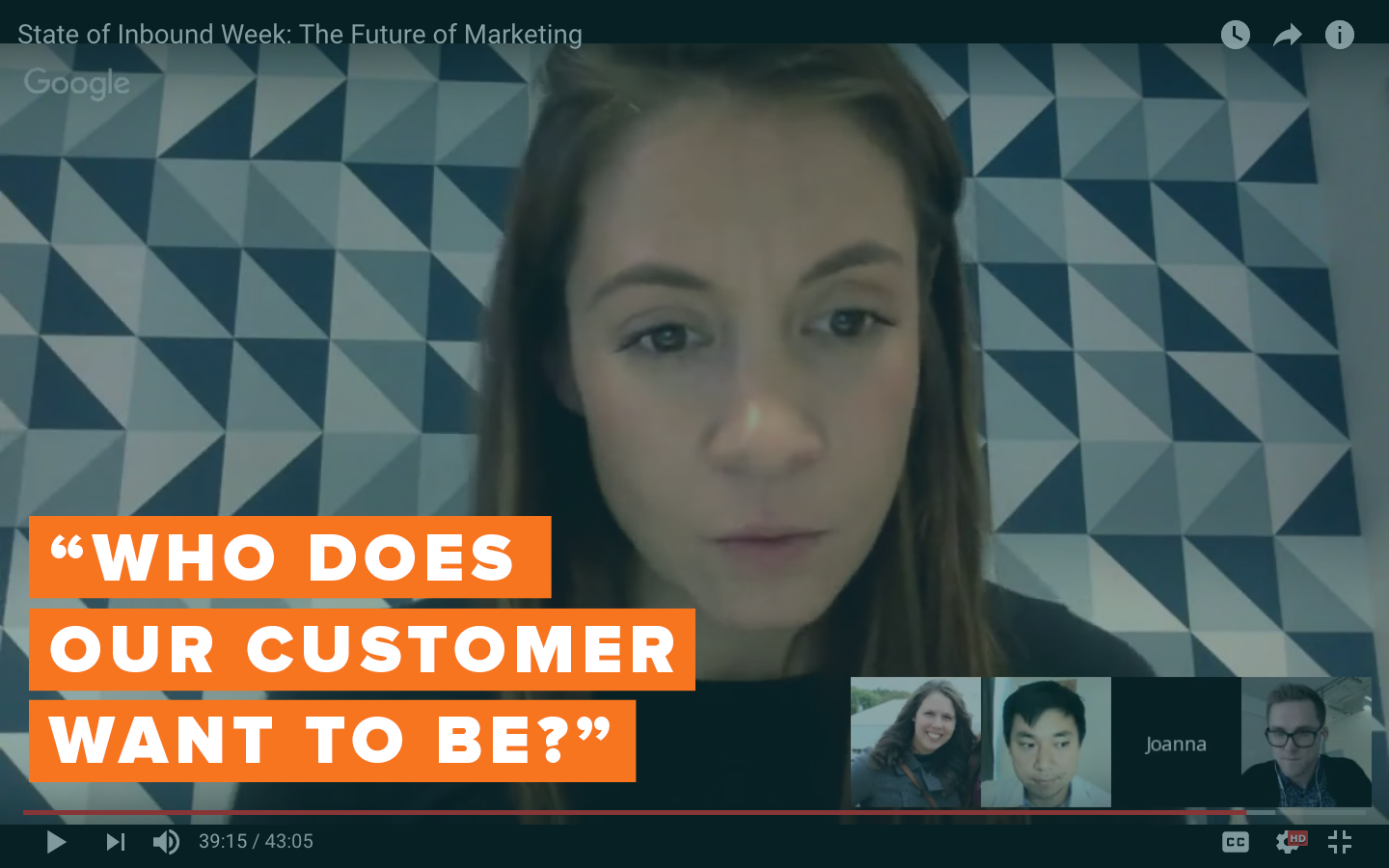 The biggest thing that’s going to grow revenues for WordStream over the foreseeable future, and for their customers, is advertising. Not just advertising the same old way, but online advertising using ridiculously powerful new technologies that have been released in the last 12-18 months.

For example, they are currently focusing on the ability to target specific ads to specific phone numbers or email addresses. According to Kim, it’s kind of like email marketing, where you can target people who are on your lists and build custom audiences. What's different is that you're not limited to segmenting by just everyone on your lists -- you can segment by behaviors and interests and demographics. According to him, it has never been easier, in the history of marketing, to go after your target market. 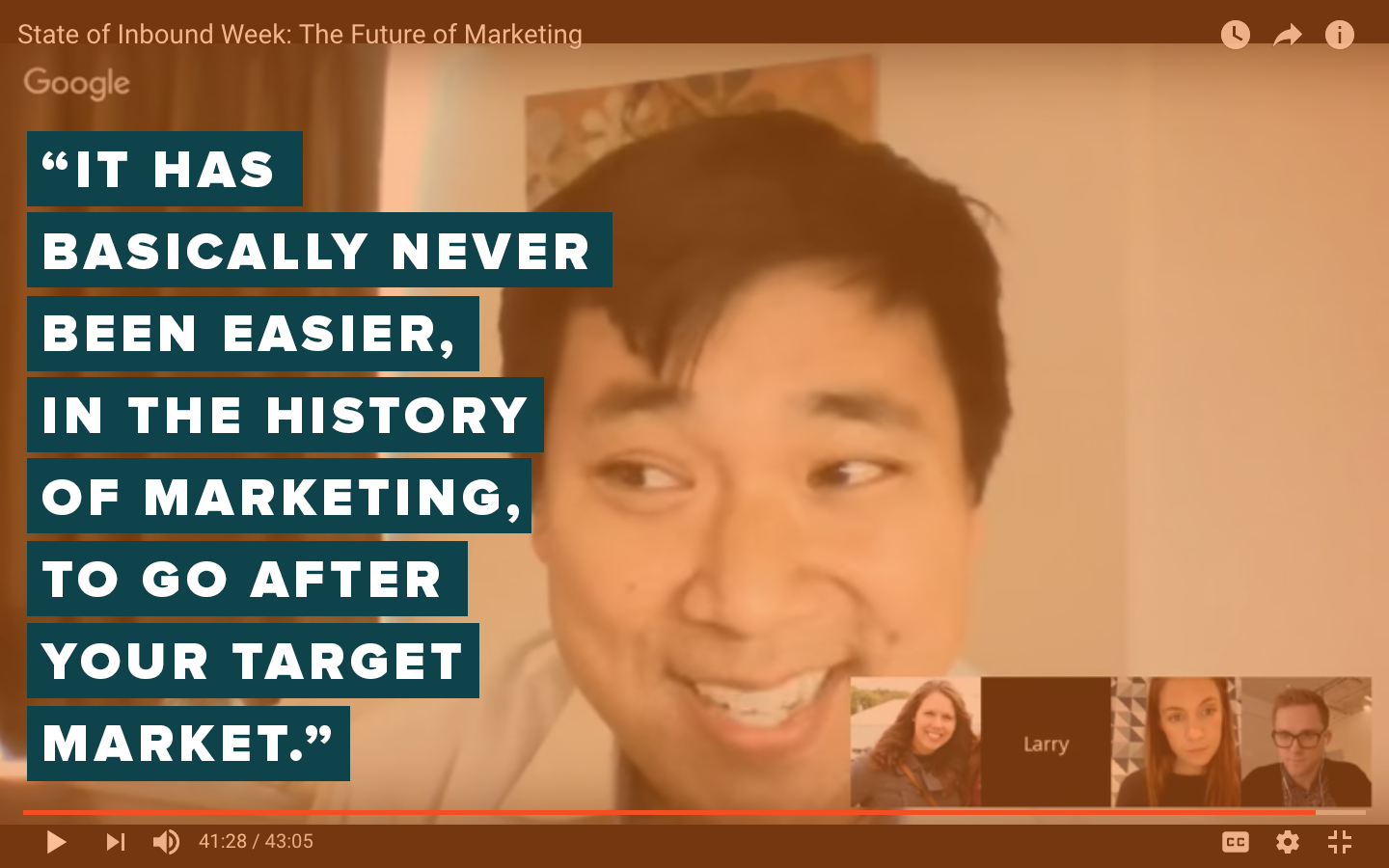 If you enjoyed this discussion between Larry Kim and Joanna Lord, head over to stateofinbound.com to learn more about the future of content, search and ads and how it's evolving in 2017.

A Privacy-First World Won't Hurt Your Customer Relationships, It Will Transform Them: Insights from HubSpot's CMO