The History of Advertising: How Consumers Won the War for Their Attention [SlideShare] 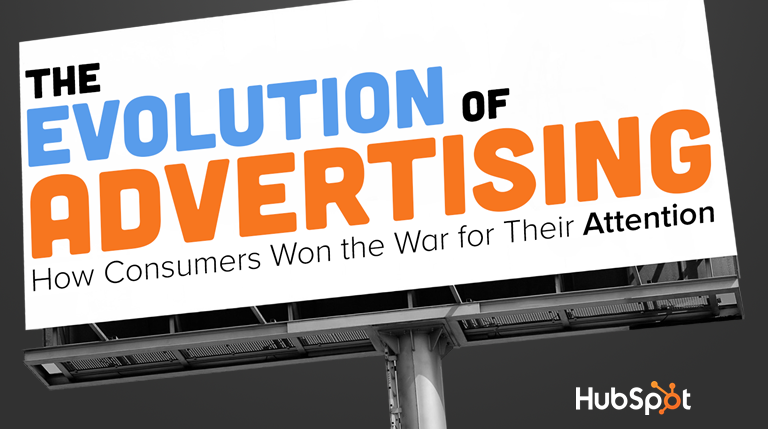 You'll never believe it, but there was a time when humans lived without being blasted by advertising everywhere they turned. In fact, before brands started cramming messages into every communication channel on earth (some even in outer space), "advertising" was simply a helpful suggestion for something you might need -- like soap, for instance.

Download the full evolution of advertising presentation here for a more in-depth look at how advertising has changed.

But over the span of several centuries, basic human needs were met. Industry niches filled up with multiple companies, each competing for a few seconds of your time to meet every conceivable need you had (or that they claimed you had). Suddenly, advertising became ubiquitous, appearing everywhere you looked, listened, moved, called, read, drove, flew, worked, and played. Buy this! Buy that! Free sample! Call us! Email us! Visit us! Follow us!

UGH. How did this happen? Why is it so uncomfortable? And who wins this constant, insufferable war for consumer attention?

We set out to answer these questions and much more in a comprehensive look at the history and evolution of advertising. We went back centuries, examining human communication and civilization as well as key advertising campaigns from each era -- and we packaged it into a SlideShare for you to peruse. As you’ll see, advertising starts to look a lot like marketing, and marketing starts to look like being a great company. And that’s a beautiful thing.

The Evolution of Advertising: How Consumers Won the War for Their Attention from HubSpot All-in-one Marketing Software

20 Fascinating Facts From the Evolution of Advertising

2) 63% of consumers need to hear company claims 3-5 times before they actually believe it. (Tweet This Fact)

5) The first professional advertising agency was launched in 1841 in Philly. (Tweet This Fact)

6) Advertising first became an academic discipline in 1900 at Northwestern. (Tweet This Fact)

9) The first ad agency to launch a product was JWT on behalf of P&G in 1911, for their product Crisco. (Tweet This Fact)

14) Caller ID has been around to spot telemarketers since 1981. (Tweet This Fact)

18) In 2009, the FTC instituted a series of regulations banning untruthful customer testimonials. (Tweet This Fact)

20) Google's Eric Schmidt cites that “Every 2 days, we create as much information as we did from the dawn of civilization up until 2003.” (Tweet This Fact)

Where Is This All Heading?

Imagine a peace treaty drawn up on Madison Avenue, signed by companies and consumers everywhere. It would surely quote the following:

These thinkers tell us all we need to know. First, create great products so your marketing rings true. Being full of baloney simply doesn’t work anymore.

Second, understand that in a world so full of information, the consumer has all the power. They can choose where they spend their time because options are everywhere -- overwhelming, but also empowering them. This means that if they don’t want to pay attention to an interruptive advertisement or marketing message, they can simply choose to spend their time elsewhere.

Lastly, once we build great companies and products and understand that consumer choice trumps marketing, we can begin to build real trust. We can attract attention by creating content that consumers actually want. We can then connect and engage with our customers by adding value in that content through learning or entertainment. And we thus delight our customers because they feel their choice was well worth it and their time well spent.

This is how real trust and loyalty are built. Quite literally, centuries of human evolution are begging companies to do this. It’s time each and every one of us embrace the course of history so we’ll survive in the future.

Want to learn more about the evolution of advertising? Download the free presentation and timeline for an even more in-depth look into how consumers have changed their research and purchase habits!