You're Going to Waste 31 Hours in Meetings This Month 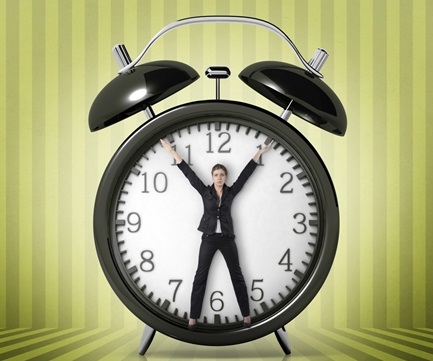 According to Atlassian, 31 hours are spent in unproductive meetings, and most employees are attending 62 meetings a month. I counted my calendar last month and I clocked in at 58 meetings. I asked my boss Joe Chernov, our VP of Content, and he clocked in at 70. A friend working elsewhere tallied up 51 meetings on his calendar in May.

Based on this incredibly scientific study I conducted in about 5 minutes, it looks like Atlassian's on to something. We're mired in meetings, and it's wasting a lot of time.

Put plainly, most of them are either useless or perceived as such. 90% of people in Atlassian's study admitted to daydreaming during meetings. 73% did other work in meetings. 47% asserted meetings were the number one time waster at the office (take that, Facebook). But the root of the problem might actually have to do with the way our brains work in meetings.

Research by University of Minnesota psychologist Kathleen Vohs indicated that we all have a finite amount of what they call "executive" resources -- the cognitive ability to process information and make decisions. (Presumably, what you're supposed to do in all those meetings you're in.) Vohs and other neuroscientists found that those resources are rapidly depleted in meetings, and once that happens, there's nothing left to give. Too many meetings is literally draining the productivity out of your brain. 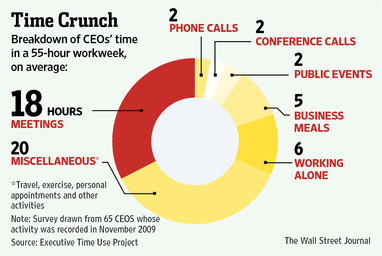 If you're wondering who spends the most time in meetings, CEOs might take the cake. The Wall Street Journal found they're spending an average of 18 hours in meetings out of a 55-hour workweek -- and that's if you don't include phone calls, conference calls, and business meals as meetings. Factoring those in, the number shoots up to 27 hours -- 40% of their workweek.

The C-Suite is always going to get hardest hit by the meeting plague, but a balance must be struck. There's a dangerous sense among some that the more meetings you have, the more worth you have to your company -- you're important, and people need to talk to you. What's really happening is wasteful meetings turn into time that you're not getting any actual work done -- so the value you bring to your team becomes less and less clear. And that can poorly impact their productivity and morale.

There's an Economic Cost to All These Meetings

Atlassian estimates that the salary cost of unnecessary meetings for U.S. business is $37 billion. So if you've found yourself wishing you could add another headcount to your team, cutting down on the quantity of meetings -- and increasing the quality of the meetings you do have -- could solve your problems.

The other alternative is your team just ends up working more. According to Psychology Today, the Center for Work Life Policy reported a steady increase in the average professional workweek over the past decade, with some workers reporting a 60-70 hour workweek. It's too simple to draw a straight line to meetings as an explanation, but consider this: American workers describe only about 35% of their day as productive work time. They rest is lost to distractions -- instant messages, a tap on the shoulder, the internet, and yes, meetings. (Source: NYTimes)

For employees looking to work their way up the corporate ladder -- or just do a good job at they work the were hired to do -- they're going to make up that lost time somewhere, and it's going to be nights and weekends. Until, of course, they're tired of that, and you see your turnover shoot through the roof, and your acquisition and retention costs along with it.

Not All Meetings Are Created Equal: You Can Make Your Meetings Better

The answer, of course, is not to cancel all meetings -- but to be pickier with what constitutes a meeting, who needs to be in it, and how it's run.

For instance, 67% of people from a Clarizen/Harris Interactive survey report they're spending up to four hours a week getting ready for their next status update meeting. Instead of long and formal meetings to stay up to date on projects, institute more short, frequent, and informal "standup" meetings. Many of our teams here run 10-minute daily standups in which members of a sub-team tell each other what they worked on the day before, and what's on their plate today. It keeps everyone on-target, prevents weeks of work being wasted preparing for meetings, and allows you to pivot quickly if you end up going in the wrong direction on a project.

You might also find that a lot of the information disseminated in meetings can be communicated via email -- and may be better consumed as such. But if you do find a meeting's the best way to communicate with your team, see whether you can cut down on the time you allot. Bring down hour-long meetings to a half hour, or half hour meetings to 15 minutes -- and set clear agendas for your time so everyone comes prepared and you stay on-topic. Psychology Today likens the phenomenon of time wasted in too-long meetings to a variation of Parkinson's Law -- meetings will expand to fill the time available.

Finally, leaders should give their team permission to opt out of meetings they don't need to attend -- and should themselves be second-guessing who they need to add to the invite list. In fact, you might second-guess whether you need to hold a meeting at all.

What Annoys Employees Most About Meetings? [New Data]