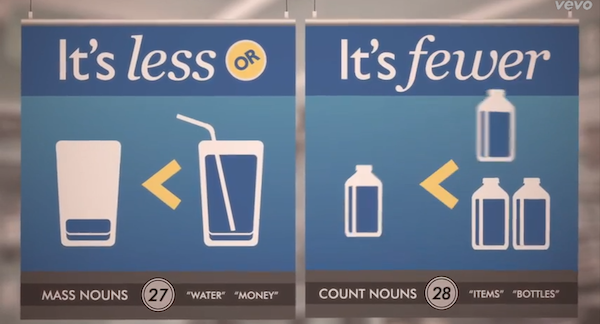 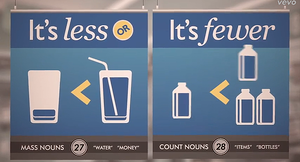 Followers of Strunk and White can now burn their sacred “little book.”

Weird Al Yankovic created a video guide to grammar — set to Robin Thicke’s “Blurred Lines” — to combat the epidemic of misused and confused words and shameful syntax in online communication.

The video will have those who are accused of wielding a “red pen” singing snarky lyrics like, “Saw your blog post. It’s really fantastic. That was sarcastic. Cause you write like a spastic,” and “Your prose is dopey. Think you should only, write in emoji.”

Here are some of the most egregious and common crimes internet users commit, as highlighted by Weird Al, but with credit due to the writers who believe brevity, clarity, and accuracy are the required elements of (writing) style:

This is about learning the difference between mass nouns and count nouns. When writing about mass nouns — like water, dust, or traffic — use the word less. Count nouns are, as the name says, countable, such as people, books, or sandwiches.

There is less damage to our house.

There are fewer attendees than the year before.

A participle is an adjective that ends in –ing or –ed and modifies a noun. When included in a phrase that modifies the subject of a sentence, things can get a bit confusing.

Consider this sentence: Typing on his laptop, the burglar stole the woman’s purse. The phrase latches on to the closest noun — the burglar.

By adding in a subject, you can easily clarify these mistakes in your writing.

Typing on his laptop, John saw the burglar steal the woman’s purse.

I Could Care Less

The correct phrase is “I couldn’t care less,” but often, people leave out the most important word, meaning that they actually do care.  If you don’t care at all — not even a little bit — then make sure you include the “not.”

While auto-correct and small keyboards have made the use of contractions hard work, it’s and its are two very different words. Its is possessive, meaning it refers to ownership of something. The company held its annual party.

It’s is a contraction, meaning it has been shortened from it is or it has.

It’s a great brand if it understands its audience. 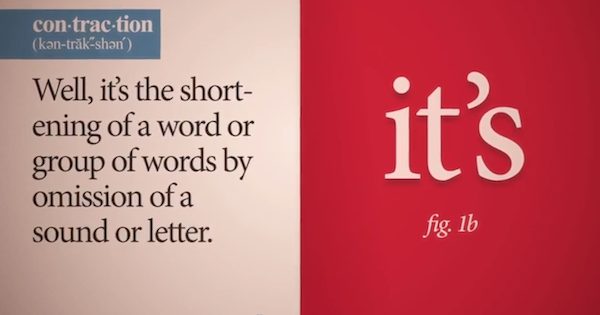 Also known as the serial comma, the Oxford comma is the comma used prior to a coordinating conjunction (and, but, for, nor, or, so, yet). Followers of The Chicago Manual of Style will use the serial comma, while those adhering to the Associated Press Stylebook — commonly used by newspapers and magazines — leave out the comma. It’s a debated subject, leading The Onion to do a satirical news story on the battle between copyeditors. Both forms are correct, so check your in-house style guide or ask your editor for her preference.

The video states, “You should never, write words using numbers, unless you’re 7, or your name is Prince.” Your writing might not be littered with phrases like L8TR or G2G, but that doesn’t mean using numbers in writing is easy. Here’s a simple checklist for the most common uses of numbers:

Use cardinal numbers (one, two, three) with numbers below 10 or when a number begins a sentence.

Homophones are words that sound alike but have different meanings. The most commonly confused words include:

Affect: Means to influence something. It should be used as a verb unless it refers to psychology, as in “she had an altered affect.”

Effect: This should be used as a noun to indicate that something is the result of another thing, as in “the effect was remarkable.” It can also be used as a verb in sentences such as “We effected change in our organization.”

Board: This refers to a piece of flat wood or getting on an airplane or ship.

Bored: This is a feeling of being uninspired or uninterested.

Desert: This is a hot place that is “hostile” for plants and animals.

Dessert: This is what you always wish you had room for after dinner.

Assure: You assure someone of your intentions.

Ensure: This means “to make sure of” or “to guarantee.”

Insure: You buy insurance through State Farm or Allstate.

Than: This indicates that you are comparing one thing to another.

Then: Use this to indicate something happened next.

Lose: This means you have lost or are unable to find something.

Loose: This means that something is ill-fitting.

Who is used as a subject, while whom or whomever are objects. An easy way to fix this is to replace who with he and whom with him.

Remove this from your vocabulary, period. But if you need to use it, the phrase means “actually or truly.” If you literally “walked 100 miles to get here,” then you spent more than 25 hours — depending on your pace — putting one foot in front of the other.

This should be used when there is a difference between what you expected and what actually occurred. Something that happens that is ironic is not the same as crappy luck — even though Alanis Morissette believes otherwise.

If you don’t have patience for learning the fundamentals of syntax, use spellcheck or install a browser plug-in like Grammarly or Ginger.

Or better yet, hire yourself #SomeCunningLinguist and give her a copy of “The Elements of Style.”