If you've spent time in front of a television lately, you're probably familiar with the formula for many women's razor ads: A woman shaves and gets glowing legs that attract positive attention from her male counterpart. You can see the formula at work here, here, and here.

If you roll your eyes when you watch these ads, you're not alone. But this formula has been highly lucrative for more than a century.

Effective advertising taps into the viewer's emotions to compel them to take an action with a product. And in the case of the women's razor and shaving industry, product messaging and ad campaigns tapped into emotions like shame, fear, and love to create an entirely new market and demand for a product previously restricted only to men.

Today, women in the United States spend roughly $1 billion dollars on razors per year -- and it's estimated that women spend between $10,000 and $23,000 on hair removal over the course of their lifetimes. Personal care trends come and go, but this one's been growing for the last 100 years. Let's dive into how marketers used effective advertising to get women to change their grooming routines -- and budgets -- forever.

The History of Women's Razor Marketing

With the 1901 invention of the safety razor and the U.S. Army contract to supply every soldier with a razor, Gillette was a household name at the beginning of the 20th century -- but it was only being used by men. Women's fashion was starting to transition from 19th century-era buttoned-up, conservative gowns to more relaxed sleeveless dresses for dancing and going outside.

Then, when Gillette created the first women's razor in 1915, it took advantage of the advertising opportunity presented by more exposed skin. Below is the first ad for Gillette's Milady Décolleté that specifically targeted underarm hair shaving in 1917: 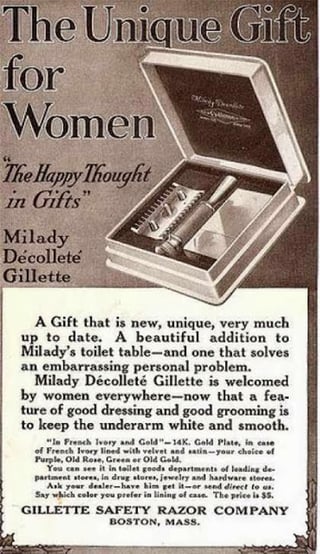 The ad copy effectively makes women feel embarrassed and left out of the trend if they aren't already shaving their underarms. The razor "solves an embarrassing personal problem" and is "welcomed by women everywhere. Gillette used its product to create a problem and provide the solution -- a genius marketing strategy, if you ask us.

In another ad, Gillette posits its razor as serving "the modern woman" to further convince women to start using its product or be left behind. The tagline drives home the importance of buying a razor and shaving: "A Refinement which has become a Modern Necessity." It acknowledges the novelty but emphasizes the urgent need for women to start shaving. 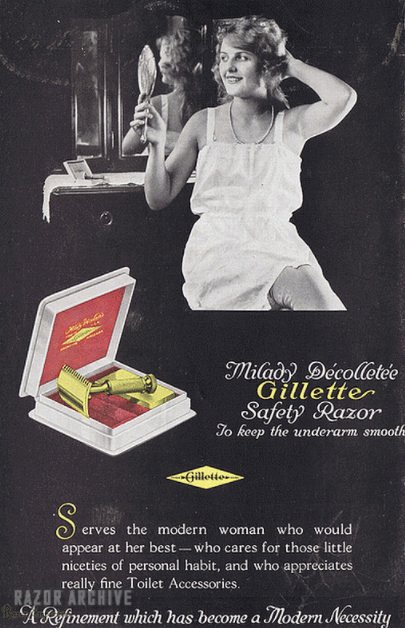 During the 1920s, flapper dresses got shorter, and women even started swimming in more revealing bathing costumes that started to show off other body parts that could be shaved. In 1922, Harper's Bazaar ran one of the first magazine ads specifically targeting underarm hair: 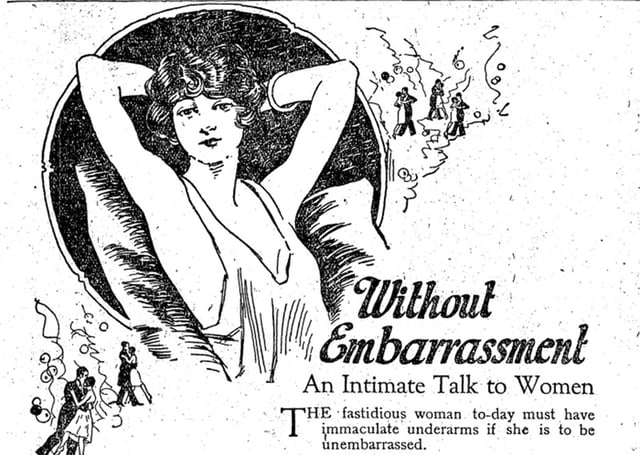 Magazines were consumed during this era for fashion advice, household tips, and women's advice, so a spread like this signaled to readers the continued importance of underarm hair removal.

Then, during World War II, there was a shortage of nylon used to make stockings, which drove more women to shave their legs and use depilatories so they could go bare-legged. Remington started selling the first electric women's razor, which was presented as a faster alternative to manual shaving and keeping legs bare.

1950s: Hairlessness Is Classy and Feminine

Once leg and underarm shaving was more widely accepted, advertisers started using language and imagery to conflate shaving and hairlessness with femininity and classiness. In the ad below, the "Debutante" makes the razor an aspirational, ladylike product women feel like they have to buy.

By 1964, 98% of American women between the ages of 15 and 44 reported they removed some body hair, and advertisers were determined to make sure that number inched up to 100%. Ads featured shaming and scare tactics to get all women on board with the shaving trend. 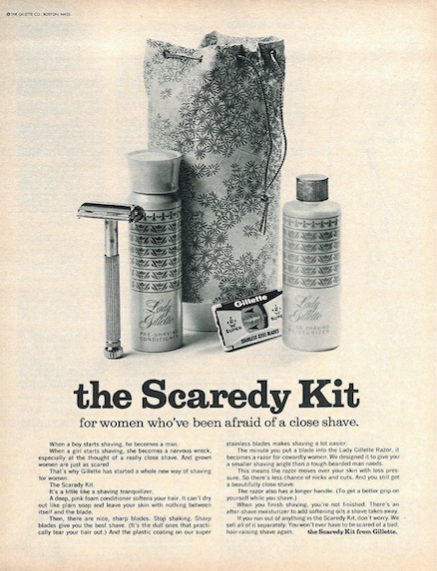 The ad is designed to make women feel more comfortable with shaving by advertising a starter kit, but some of the copy is a little more intimidating: "Stop shaking. Sharp blades give you the best shave." It's meant to challenge readers to woman up and use Gillette to shave their legs -- and it worked.

1980s razor advertising seemed to be focused on women shaving to make themselves hairless to be more appealing to men -- just check out Gillette's "Just Whistle" ad below. 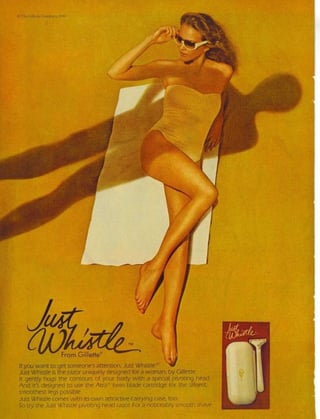 In the 1990s and 2000s, ads and commercials shifted to tell women about the importance of shaving to keep their entire bodies hairless -- still to the appeal of men -- for all of the occasions when they're in short skirt, swimsuits, or wearing nothing at all. Razors bore new features to shave legs and bikini lines, adding to the list of body parts ads encouraged women to shave.

2010s: Shaving Needs to be Disrupted

Nowadays, razors are an expensive industry -- especially for women. Women's razors are subject to the "pink tax," wherein women's products are more expensive than the male versions despite identical functionalities. The disposable razor market is worth $34 billion and isn't environmentally ideal, so other companies are trying to compete with the giants like Gillette and Schick. On-demand services, such as Dollar Shave Club and Harry's, are advertising razors primarily to men, but the products are unisex, and the ads appeal to different motives -- like price, convenience, and a better solution to traditional razor shopping.

If You Build it, They Will Shave

Razor companies used fear, shame, loneliness, and sex appeal to create a massive women's shaving industry from scratch. And however frustrating that is for the modern buyer, women's razors are a fascinating case of effective emotional advertising. It will be interesting to see if newer, on-demand razor companies can disrupt such an entrenched industry, and we'll keep you posted on more fun ads from disruptors like DSC.

Can you think of other industries that were created with the help of marketing and advertising? Share with us in the comments below.