The Beginner's Guide to Competitive Benchmarking

Have you ever played a game of Monopoly and kept tabs on the other players? Maybe you took a mental note on which player had the most properties, or who had the best buying and selling strategy. 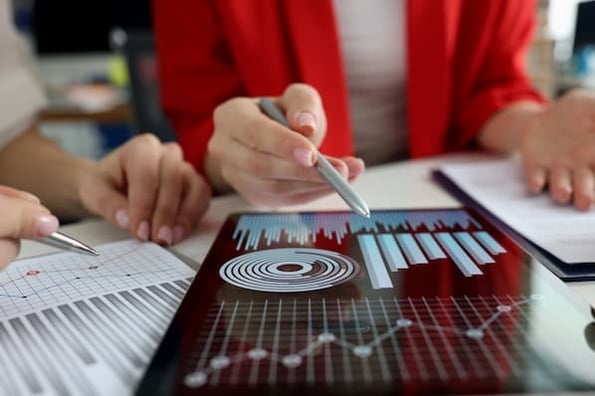 But the value of observing the competition isn't specific to board games — actual companies can benefit from it as well.

One way to get there is through something called "competitive benchmarking" — the process of looking externally to see how your business stacks up against your competitors and industry standards.

What is competitive benchmarking?

Competitive benchmarking is the process of using relevant metrics to compare your company against its competitors and the overall market.

You might already practice a form of benchmarking in your business. For example, a company may practice internal benchmarking within a department to ensure a goal is hit each week, such as completing a certain number of sales calls. But looking inward can only get you so far.

By benchmarking yourself against the competitors, you can identify any "blind spots" in your sales efforts, pinpoint best practices, and maintain a competitive edge within your market.

It's worth noting that competitive benchmarking is not the same as a competitive analysis. Although similar in approach, they serve two distinct purposes.

A competitive analysis requires a deep dive into the strengths and weaknesses of the competition relative to your own business. It scrutinizes every product and strategy — from messaging to sales processes.

Competitive benchmarking is future-focused — it measures how others perform over time to find best practices and trends in the data.

The first step is to determine the key performance indicators (KPIs) you want to track and measure — that could be anything from inventory turnover to customer retention to average sales cycle length.

Ideal KPIs for a competitive benchmarking analysis are ones your sales org already tracks that can serve as early indicators for bigger outcomes.

For instance, if you think your customer retention rates aren't where you'd like them to be, you might want to benchmark your Net Promoter Score to see if your underperformance is on par with the rest of your industry.

Next, identify competitors to benchmark against. It can be helpful to revisit your KPIs, then select relevant competitors that perform well in the areas you’re looking to improve. For example, if you want to develop a competitive selling strategy, which competitor has the most effective pricing model — and what exactly do they offer?

Benchmarking can be performed against a variety of companies across different industries, including:

3. Decide on your benchmarking metrics and track them.

It’s easy to collect data from your own company, but collecting data on your competitors is not as straightforward. Public companies release annual reports online, but you'll have to do some sleuthing to find this info from privately owned businesses. Watch out for press releases, news articles, and sales reports that offer specific information about the company.

To simplify this process, consider using a benchmarking tool to keep track of your competitor’s data. Some benchmarking tools are free or trial-based, while more comprehensive ones require a fee.

For example, Klue and Crayon gather intel from millions of sources online (such as e-newsletters and news articles) and use AI to surface the most relevant intelligence for your sales team. Other tools like SEMRush and Ahrefs benchmark your competitor's growth and performance across multiple digital marketing channels.

For more than 15 years, Xerox dominated the printer market, eventually reaching a record-setting $1 billion in revenue in the 1960s. By the 1970s, Xerox continued to thrive with strong patents, little competition, and a growing market.

Yet, in the early 1980s, a new batch of competitors like Canon and Kodak entered the market, causing Xerox’s market share to plummet.

In response, Xerox launched a new initiative, "Leadership Through Quality," to radically change the way it did business. Xerox benchmarked more than two hundred processes with other companies, and the results were shocking.

In comparing itself with its competition, Xerox discovered it had:

Based on these findings, Xerox overhauled its quality and manufacturing operations, and benchmarking became an important tool for these efforts. For instance, upgrades to its distribution system came from L. L. Bean, a clothing and outdoor equipment retailer. And ideas for a new billing system were inspired by American Express.

In the years following, XEROX expanded the competitive benchmarking program, continually improved and upgraded its processes, and eventually recaptured more market share throughout the 1990s and early 2000s.

United Airlines sought to revamp and elevate its website's user experience, making it easier for customers to research and book flights online.

In the first phase, Centralis assessed the usability of the then-current United website against three key competitors. Then, using the findings from the first round, United Airlines created a beta-version redesign of their website that was benchmarked against the same competitors.

Using competitive benchmarking, United Airlines was able to make confident decisions when redesigning its website, eventually leading to an increase in its Net Promoter Score (NPS).

These matrices can be more visual in nature, such as a scatter plot, or as simple as an Excel sheet containing information. Regardless of the matrix you choose, the goal is the same — to see your company’s competitive landscape, as well as trends and possible improvement opportunities in the data. 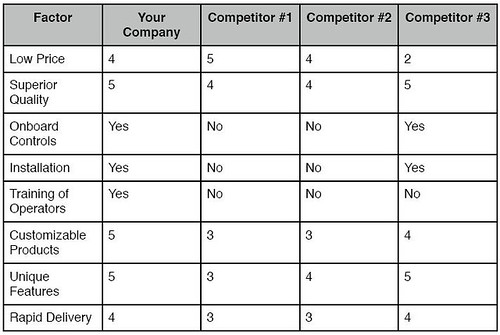 A basic competitive matrix is the SWOT analysis, which compiles your company's strengths, weaknesses, opportunities, and threats. Conducting a SWOT analysis will help you identify areas where you could improve, as well as uncover new strategies and opportunities to adopt.

A features/benefits spreadsheet records how your product stacks up against competitors in terms of features, benefits, and price. This can give you insight into what your customers want, and pinpoint the trade-offs for customers as they explore other options in the market.

A review tracker matrix will help you see the reviews you receive compared to those of your competition. Reviews can reveal compelling insight into what your company (or competitor) is doing well, and what areas could be improved.

Competitive benchmarking should be an ongoing process that, when conducted regularly, can provide powerful insights into any "blind spots" in your sales efforts and pinpoint best practices and future trends.