Even though "network" is in the name, I don't think of most social networks as actual networking sites. For me, Facebook is for friends. Twitter is for sharing. Pinterest is for inspiration. YouTube is for videos.

But LinkedIn? That's the one social network I actually use for networking.

Now, I don't keep up with my LinkedIn networking as well as I should. But the one time of year that I really go nuts is at INBOUND. I meet a ton of people, there's a lot of follow-up to do, and the very first thing I do with each new contact is send a LinkedIn invite.

So, since September is just a few months away (don't shoot the messenger, I like summer as much as the next person), I thought it'd be a good time to revisit the LinkedIn networking skills we should all keep in mind as we connect with new people. I've been on the receiving end of all of these LinkedIn connection faux pas, and they've all caused me to reject the invitation to connect immediately. It's a sample set of one, but seriously, I think we can all agree these things are just ... awkward.

I won't post a real example here because I don't want to embarrass anyone out there (you know who you are), so let's use this stock photo as an example of what not to upload: 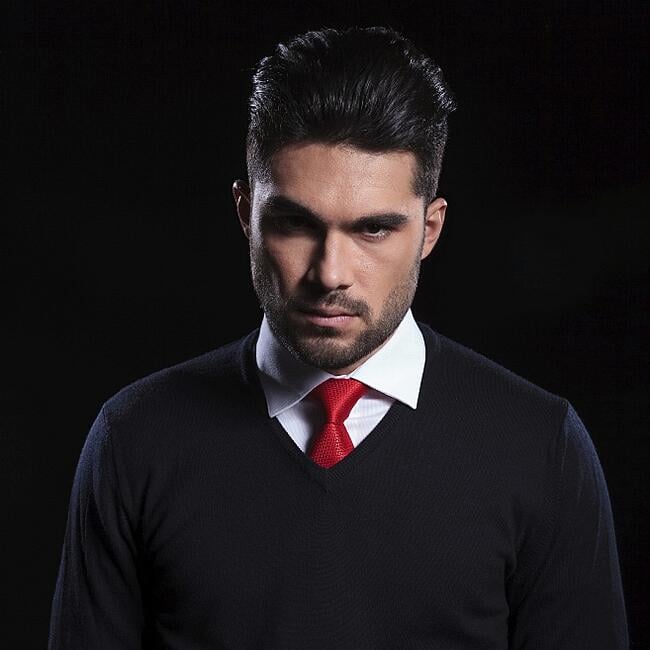 Can you imagine opening up an email and seeing that face staring back at you? Pretty disconcerting. Same rule applies for pictures of you with a red solo cup, selfies you took in your bathroom mirror, or pictures with weird starbursts in the background that make you look like a magician.*

You don't need to have a professional headshot up there. Just be your normal, work-appropriate self.

*Actual magicians get a pass here.

2) Filling Out Barely Anything in Your Profile

It's hard to trust people who leave most of their LinkedIn profile blank. It raises a lot of unnerving questions, such as:

With completed profile fields, some of those questions start to get answered. For instance, if I see an invite from someone who works at a company I recognize, at least I know they're a real live person with a job at a real live company. If they're in a similar industry, even better -- it makes sense that we'd want to network together.

If your LinkedIn title says your last job was as a CEO, but you neglect to mention it's of the lemonade stand you managed when you were nine, you're being deceptive -- that's the wrong way to start off a new relationship.

Get rid of bombastic titles, rewrite job descriptions that have nothing to do with what you really do every day, and quit bragging about big name connections that might have accepted your invitation connection, but don't really know you.

I've already written enough about the ills of business babble, so let me just leave it at this:

If you're telling people you're looking to envisage a new model for the platforms feeding the digital interconnection space, maybe consider a rephrase. No one know what you're talking about, or what you really do.

5) Providing No Context for Your Connection Invitation

If you know the person with whom you're connecting, no additional context is needed. For instance, when I connect with someone I've been working on a blog post with, I don't add a note that says "Just connecting since we've been working together on a post for a week!"

However, it can be a little awkward if you've never met a person (or only met them once, briefly) and are sending connection invitations without context. You don't need to write a novel, but a simple message like, "Hi Shannon, I loved the design of your latest ebook. I'm an aspiring designer and would love to connect!" gives the recipient some reassurance that you're someone they should have in their network, and a jumping off point to start a discussion.

6) Moving to Other Communication Channels Too Early

I once accepted a LinkedIn invite from someone, and they started IMing me in my personal Gchat.

Whoa. Let's dial it back a few hundred notches. I "unlinked" with him and blocked his profile after that.

If you're just getting to know someone, keep the communications on LinkedIn until you've messaged enough that it warrants emailing.

A perfect example of this is a connection I made with a VP of Sales and business owner for whom I now do periodic guest writing on restaurant marketing. He connected with me because of a piece of content I'd written, mentioned he was inbound certified, and he seemed incredibly normal. So, I checked out his site, realized it was about a niche I love (restaurant marketing) and we started talking from there. After a few LinkedIn messages, we decided it was way easier to email, and a year later we've established a great professional relationship and content partnership.

When you're networking, it's okay -- even encouraged -- to have an "ask." It's the next step that helps move the conversation and the relationship along. It can also provide some welcome context to your new LinkedIn connections (i.e. understanding that someone wants to connect because of a specific problem you can help them with).

But sometimes, people ask for way too much from people they barely know. For instance, there's a huge difference between asking someone if they could help you find your next hire, and asking someone whether they know anyone who would be a good fit for an open role. Or asking someone for a quote for a piece you're writing, versus asking them to review the entire piece and provide feedback.

The ultimate goal here is to turn your new LinkedIn relationships into real-life relationships. Part of that is helping each other out. But be realistic: Rome wasn't build in a day, and neither are long-lasting professional relationships.