How I Closed a $100,000+ Deal Using Unlimited Email Tracking 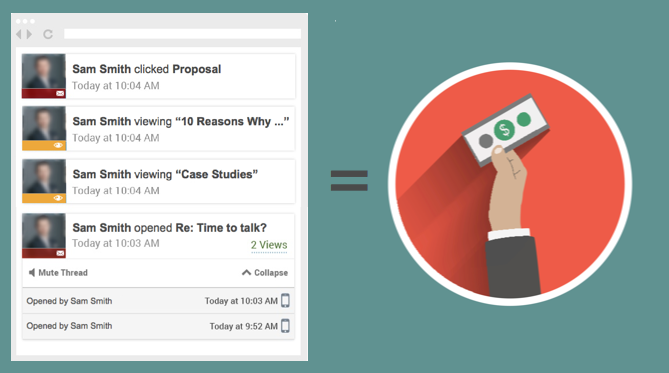 Just when I thought we lost a massive contract worth $100,000,
HubSpot Sales email tracking notifications told me I was wrong.

Pitching our marketing services to a prestigious eCommerce lead, whom we've been interacting with for months, I was positive we'd close the deal. They loved everything --- our service, our team, our philosophy. And then after sending our final proposal, what happened?

Absolutely no response. I could practically hear the crickets chirping.

You know the horrible feeling:

When you're inches away from closing a massive deal you've been nurturing for months … then met with ice-cold silence. It feels like a punch in the stomach. So I asked myself:

After many weeks of silence, I gave up. Wouldn't you?

It's a frigid Wednesday afternoon in Baltimore, Maryland. I’m sitting at my desk, prioritizing recent leads in our CRM, when a notification pops up in on my computer:

This is an email tracking notification, showing me that the eCommerce company's contact from nine months ago just opened my email … and clicked the link to our proposal.

I didn’t want to jump the gun, so I took a mental note that they’re viewing the proposal and got back to work.

Later that day, I get another notification alert. He's reading our blog posts:

The next morning, I get ANOTHER notification. He's reading the case studies on our website:

This is when I knew we might still have a chance.

So I sent this follow-up email (names and contact information have been changed):

Hope all is well. I had put a reminder in to check-in with you to see how things were going with the eCommerce initiatives. We had discussed a potential partnership a few months ago, but hadn't been able to formalize our recommended engagement.

We would love to catch up and see if there are any opportunities for to engage with you all and help with your eCommerce strategy. Let me know if you have sometime to reconnect this week and catch up business owner to business owner on where you see things and I can provide some ideas on where we can help.

Look forward to hearing from you.

Two hours later, I get a response:

During our phone call, he mentioned the coincidence between the timing of my follow-up email and their current problem — they were looking to partner with a marketing agency.

Oh really? That’s such a coincidence.  :)

One week later, they flew down from out-of-state to review our proposal in person.

The lesson here is pretty clear: if I didn't have email tracking software installed, I never would have followed up again. Nine months of silence would've permanently ended our relationship:

However, since I received notifications they were opening our emails, reading our proposal, reading blog posts, and viewing our case studies ... it signaled they were interested again.

As a result, it alerted me that a silent, old prospect had become a hot, new lead. And that lead quickly turned into a six-figure contract.

The success of this deal can be boiled down into three words — timing is everything.

We can send the most persuasive follow-up email ever written, validated by highly effective sales managers in Fortune 500 companies …. but if it’s out of context, or sent at the wrong time, it’s worthless.

If I didn’t follow up at that exact time, while we were obviously on their mind, without HubSpot Sales we could have lost over $100,000 this year.

In summary, it’s fairly incredible that an email tool, HubSpot Sales, helped me close a $100,000+ deal.

Without it, I’d be blinded by the actions of that eCommerce prospect, clueless that they’re re-engaging with our content. I would’ve let it slip by, without ever realizing my costly mistake.

Talk about a return on investment.