These 18 Female Motivational Speakers Are Killing It 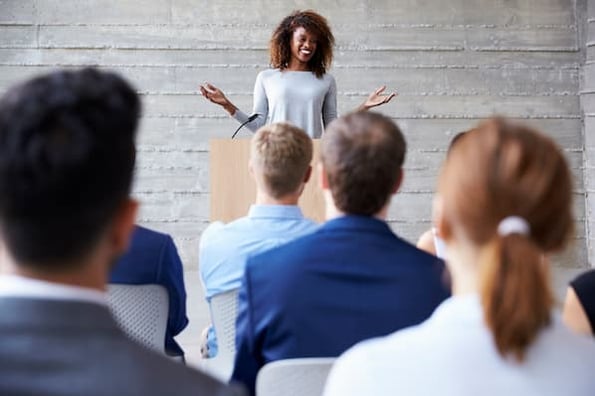 Hatcher is a self-admitted “horrible student in high school who created her own luck.” She was honored at the White House as one of 2011’s Empact Top 100 Entrepreneurs under 30 and the author of five books. She uses failure as a motivation for business success.

"We have everything that we need in order to be successful." -Felecia Hatcher

Can you imagine cheating death and surviving an attack by an orangutan in Cameroon? Baffour has lived it. After the death of her father, she found the courage to leave her stable job and become a speaker, trainer, and executive coach. She uses courage as a weapon to live a more fulfilled life.

Raised in a single parent home after her father was killed in a car accident when she was five years old, Asher currently works as a news anchor at CNN International. Oh, and her brother, Chiwetel Ejiofor, got a Best Actor Oscar nomination for “12 Years A Slave,” in 2014. Life has taught her hard work, talent, and brains are not the only keys to success -- Asher recommends trusting your struggle.

"Most people wait until they get the call for a job interview before they begin to prepare ... my brother taught me to prepare, well before you get that call." -Zain Asher

Hassler worked as a Hollywood agent until 25. She experienced a massive quarter-life crisis when she lost her job, engagement, health, and money. Later, she earned her master’s degree in spiritual psychology. Christine is an author and speaker obsessed with human optimization. She also identified and trademarked the phenomenon “Expectation Hangovers”.

Robbins started her career as a criminal defense attorney and went on to launch and sell a retail and internet technology company. Mel is an author and is currently one of CNN’s on-air commentators and opinion writers. She believes there’s only one rule to getting everything you want.

When she was the CEO of a large religious non-profit organization and preacher, her name was Paul. Today, she’s the Pastor of Preaching and Worship Ministries at Left Hand Church, in Longmont, Colorado. As a transgender woman, Paula Stone Williams has lived on both sides and, according to her, “the differences are massive!”

"My father is 93 years old and he's willing to try ... One man willing to give up his power, because he knew what he knew: that he loved his child. And he was willing to do whatever it takes to honor the journey of another." -Paula Stone Williams

Born in rural Mississippi in 1954, Oprah has lived her life out loud and is now a well-known media proprietor, talk show host, actress, producer, and philanthropist. She views failure as necessary nudges that move you in the right direction.

Brown created a business that helps companies improve profits through better pricing. She’s fluent in Spanish and holds a U.S. Patent for light bulb technology. She believes if you better communicate your value, you can get paid for your excellence.

Visually impaired, or, as she prefers, “partially sighted,” Robinson gave up her dream of becoming an orthopedic surgeon and chose a career in organizational leadership. When speaking, she combines serious issues and humor to address difficult topics with openness. She believes relying on your best strengths yield tremendous outcomes.

Cole is a writer and speaker who draws on her experiences growing up with two autistic brothers to tell stories and shift mindsets. She believes those who are not ordinary are actually extraordinary.

A performing poet since she was 14 years old, Sarah Kay is the founder of Project VOICE, an organization that uses spoken word poetry as a literacy and empowerment tool. She has very clear ideas on what she would say if she had a daughter.

Fonda earned two Best Actress Oscars, an Emmy, and a Tony Award nomination. She revolutionized the fitness industry in the 1980s with an all-time top-grossing home video. She believes a staircase is a metaphor for aging.

Purdy became a professional snowboarder, despite losing both her legs below the knee to meningitis. She rebuilt her life after asking herself, “If my life was a book … how would I want this story to end?”

She’s the author of 15 books, and she transformed her life from the Brooklyn projects to an Emmy Award winner. Iyanla embodies a no-nonsense approach in her message and teaching style. It was in a Home Depot she realized her worth.

"I matter, and how I show up in the room matters." -Iyanla Vanzant

Van Edwards is lead investigator at Science of People, where she has developed a science-based framework for understanding and communicating with different personalities. Check out her talk below on how to talk to anyone.

A self-described "stand-up comedian who can't stand up," Zayid is co-founder of the New York Arab-American Comedy Festival and an advocate for the disabled, especially those working as actors. In her TED Talk below, Zayid shares her perspective on casting disabled actors and how that translates to inclusivity elsewhere.

Matthews is a diversity trainer who believes we have to do better at diversity and inclusion. She challenges, "Diversity will always give us space in the room. But it leaves no room for our thoughts and our ways of life. Inclusion will change our rooms. Inclusion will make sure we all have a seat and a voice ... once you hear the voice, you have to act to make some changes. That's inclusion. That's what matters."

"Diversity to me is kind of like a fruit platter. All of the parts are present, all are represented. But they're kept separate. They're not involved in any meaningful way. It looks cute, it looks good, but it's superficial." -Kenyona Matthews