The Pain Funnel: a Key Component of the Sandler Selling System

When done correctly, sales is the process of solving for a prospect. It's a mutually beneficial engagement where one party raises an issue, and the other offers a solution. That said, a sale is rarely that straightforward. 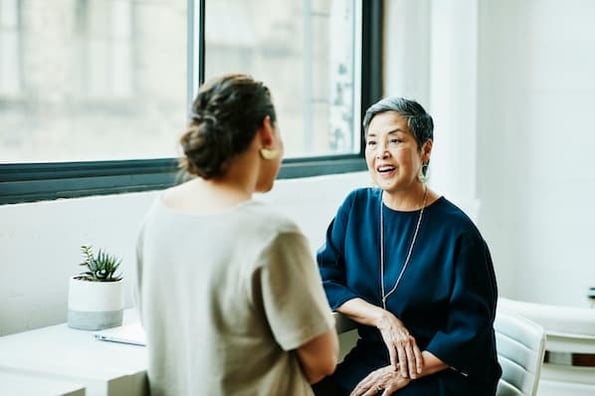 In many cases, that issue your prospect raises won't be obvious — complicating how (or even whether) you should present your solution. You need to know why a potential customer needs your offering before you can explain what they stand to gain from it.

In other words, you need to know their pain points. But those concerns aren't always readily apparent — in some instances, you're prospect might not even have a clear idea of them, to begin with.

If you want to consistently close deals, you need to be able to bring those problems to light. One way to get there is by leveraging something known as a "Pain Funnel."

Here, we'll dig a bit deeper into the concept, look over some of the questions that make it up, and review the techniques you can use to get as much out of strategy as possible.

What is a Pain Funnel?

The Pain Funnel is a systematic series of open-ended questions and statements — organized as a part of the Sandler Sales System — designed to uncover prospects' pain points through emotional understanding.

The Pain Funnel was invented as an element of the Sandler Selling System — a popular sales methodology that rests on the premise of sales reps acting more like consultants than traditional, pushy salespeople when engaging with prospects.

Sandler Selling is customer-centric, and the pain funnel reflects that. It's not a pitch. It's not abrasive or in-your-face. And its endgame isn't always to make a sale. In most cases, the pain funnel is used to identify whether a solution suits a customer's needs and if a sale is viable.

If a salesperson determines a customer is a good fit, they use the information they gathered through the pain funnel process to conduct a well-informed, more concentrated, effective sales effort with their prospect.

The funnel's primary purpose is to reveal the pain a prospect is dealing with by way of an increasingly specific line of open-ended questioning. Questions start broadly and whittle down to more personalized and immediate — hence the funnel imagery. 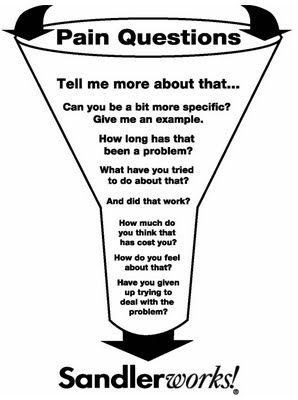 Now that we have a picture of the pain funnel's fundamental premise, let's take a closer look at the questions that generally compose it.

You can start using the pain funnel questions when you think you've identified the inkling of a pain point. From there you can begin to ask a series of questions that resembles the following sequence:

Though the questions you ask might not wind up reflecting the ones listed above verbatim, they should still follow a similar trajectory.

The entire premise of the Sandler System's Pain Funnel rests on digging deep, teasing out real answers from prospects, and letting them come to conclusions that they might not have even considered.

You can't get there by dominating the conversation, drawing quick conclusions, and tying up a conversation when you get any semblance of resistance. Successfully leveraging the pain funnel takes patience and thoughtfulness.

All the pain funnel questions are open-ended, and getting the most out of open-ended questions often means embracing silence and giving your prospect some space to put some of their thoughts into words.

The pain funnel is also strategically organized. The order of those questions isn't arbitrary. That doesn't mean you have to rigidly adhere to the order or only ask the questions listed above — as with any sales strategy, you have to have some wiggle room to improvise, read the room, and adapt accordingly.

Still, you should use that sequence as a backbone for your conversation and try to stay consistent with it when you can. No matter what, you have to keep the conversation open-ended and aimed at exposing pain points your prospect is facing.

Any purchase is pointless if there's no pain behind it. There has to be some kind of need or interest motivating a prospect, and as a salesperson, it's up to you to bring it to light and offer a solution to put it to rest. To get there, you often need to get your potential customer talking, applying the Sandler Selling System's Pain Funnel is one way to get there.