The 4 Phases of Sales Prospecting: Which Is Your Team In?

Over the last few decades, sales has come a long way. It’s gone from rolodexes to CRMs, from instinct to insight, from knocking on doors to joining a WebEx. Instead of asking, “Did you call Jim again this week?”, sales managers are dropping lines like: ”Our predictive scoring algorithm suggests that Jim is in a buying cycle -- please call him at 4 p.m. when we know he’s at his desk.”At the heart of this evolution is data. A prospecting email or phone call is only as timely and poignant as the information that informs it. Below, I take a pass at summarizing what I’ll call the "four phases of sales prospecting." And in doing so, I’ll provide a quick synopsis of the data, tools, and tactics used for each stage. At the end, I’ll identify a few ways any sales leader can update their process to increase the efficiency and output of their team.

Back in 1992, the sales dramedy Glengarry Glen Ross gave the world an inside look into the grind of old school sales prospecting. It harkened back to the days when most reps had only two prospecting tools: a phone and a rolodex. In addition, the movie propagated the idea that sales reps don’t care about their prospects and prospects rarely understand what they’ve purchased once the deal is inked. It also featured a lot of “pick-me-up” conversations like this one:

As computers and automation tools started to proliferate the sales floor, sales data companies took center stage by adding company and contact data to the prospecting mix. A common workflow for phase two sales reps went something like this:

If phase one is all about “smile and dial,” phase two can be characterized by the term “mass blast.” For sales teams, it was all about covering as much of your target market as possible and playing the numbers game. This may have worked for a bit, but as prospect’s email and voicemail boxes started filling up with the same old pitches, the need to differentiate and personalize arose.

As social networks like LinkedIn, Twitter, Google+, Quora, and Facebook began to take off, so too did social selling. In this phase, prospecting data and intelligence gets collected straight from the source and used to create a unique, personalized outreach message that matches something found in a prospect’s profile or recent post. Social selling teams are tasked with getting a decision maker’s attention by scouring social media and using techniques like citing mutual connections, or crafting a message unique to the prospect’s use case.

The last phase of sales prospecting is one rooted in compelling events. In this phase, a sales rep’s success is based on how quickly and effectively they can respond to compelling events completed by their prospects. Here are a few common examples:

The two key ingredients of an event-based prospecting strategy are context and timing. Successful reps use the above queues to create messaging that both fits within the context of their prospect’s situation and provides a timely solution to a prospect’s current problems.

Here’s an example of an email that completely blew me away -- the rep figured out that I’ve started using their competitor’s social sharing tool and attempts to start a conversation on the topic. 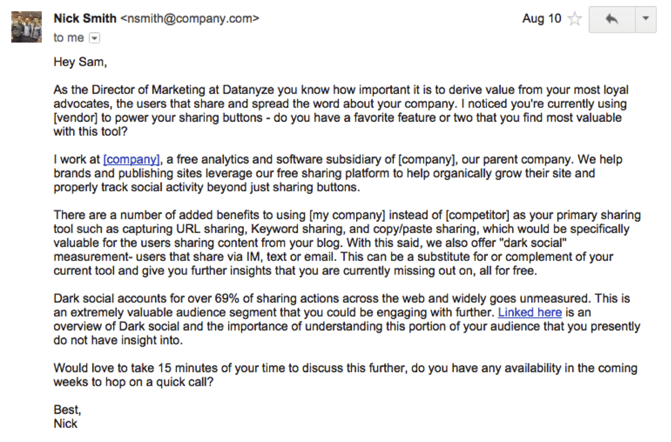 Sales prospecting is being reformatted to match how buyers want to be sold to -- and the main takeaway is that buyers don’t want to be sold, they want to be advised. And the best way to advise is to give your team the tools and intelligence they need to provide timely, contextual information that lines up with compelling events.

This means using LinkedIn to keep tabs on hiring events, and using other social networks or forums to surface buyer intent. It means keeping tabs on emails after a rep hits “send” and reacting to opens, clicks, and collateral views. Finding the perfect mix of compelling events can lead to more emails like the one above, and -- more importantly -- more demos, more pipeline, and more deals.