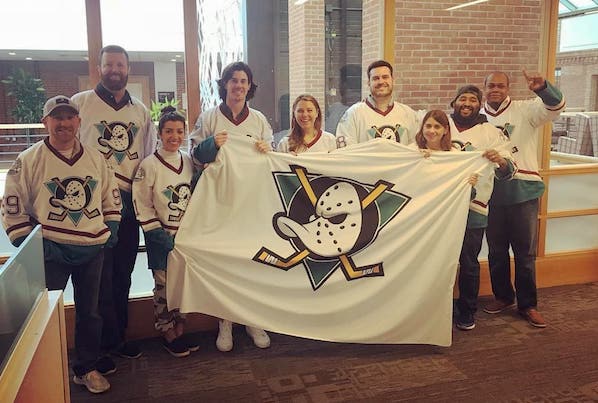 What's in a name?

When we think of successful sport team names, like the New England Patriots or the New York Yankees, we picture the motivated individuals that make up the team. And we envision their dedication to achieving a common goal (i.e., winning a championship.)

But, how does a name contribute to a team's success?

For sales managers, a positive and productive team dynamic is crucial to your team's success. And as a salesperson, a supportive team can provide a sense of community and help you excel in your role.

If you're ready to brainstorm some creative team names, here are some stories and tips from sales managers at HubSpot. Learn how they named their teams and the benefits they've seen from creating a unique team name.

Here are a few creative sales team names used by real sales teams that will inspire you to create your own.

Why should you and your team come up with a creative name? There are a number of benefits:

1. It unites your team with a common vision.

The sales team name should be descriptive about what your team stands for and what its priorities are. For example, HubSpot sales team, Wolfpack, has a team vision "to achieve mastery through incremental improvement, deliberate action, authenticity, and conscious balance." This gives each member of the team something to work towards as a team.

The process of creating a team name should be collaborative. Have your salespeople brainstorm ideas and vote on them during your next team meeting. This is a fun exercise that can get everyone's creative juices flowing. And it will result in a name that reflects what the team stands for.

This collaboration often carries through into the day-to-day work of your salespeople.

What is team selling? It's a sales strategy where two-plus members of an organization working together to win business.

A team name provides a way to define the values and vision of a team. This brings individual team members together to work towards their goals. Not only will salespeople build stronger, working relationships with their teammates, but team selling also helps increase win rates for the entire team.

Hugh Willoughby is a principal sales manager at HubSpot. He started his career at HubSpot as an account executive and saw that many teams simply create their name based on the name of the manager.

But, Willoughby doesn't believe this is the best option. He takes a collaborative leadership approach and wanted his team name to reflect that.

"It isn't about me, it has to be about us," he said. "Create a formula to come up with a name. What are the values of your team? What's the vision of your team?"

It sets the tone for their team and creates mutual respect between manager and salespeople. They also created a team flag for their section of the office and a Slack channel to promote a greater sense of community.

Sales manager, Kaitlin Callanan, and her team chose Yewww Crew for their name. "In sales, team names are often the manager's last name -- it's really impersonal. If you center the team around one individual, it introduces a hierarchy, which doesn't help with team unity."

So, what exactly does "yew" mean?

"Yew is an expression of excitement, joy, or a positive outburst," says Callanan. "It's used in a variety of sports (e.g., skiing, surfing, skateboarding). And it's focused on sharing the excitement with someone else and being excited about something someone just did. When someone would bring in a deal, the team started making a YEWWW sound."

The sales teams at HubSpot are prioritizing diversity and inclusion and sales managers should ask, "How can we find a culture where everyone feels like they have a spot or space on the team?"

Team names can play a significant role in making each member of the feel as they belong. The primary goal of a team name should be to get everyone on the same page and working together to do their personal best and achieve team goals.

And she says, "The funkier the name is, you can attach whatever team culture or spirit you'd like to it. What does your team embody?"

What do the Mighty Ducks have to do with sales? For Pratik 'Tiki' Biswal's team, this 90's Disney movie provided the inspiration they needed for their team name: Southwest Mighty Ducks.

This scene, in particular, highlighted the theme of unity with the "Ducks fly together" speech.

Biswal met with his team to brainstorm and everyone provided their best suggestions. He was randomly looking through zip codes for territory assignments, and his team was in the southwest territory. "I saw that Anaheim was part of our territory. So I thought of the Anaheim Ducks (the professional hockey team) and then, Mighty Ducks." They added Southwest to their name to highlight the territory their team covered.

Their name highlights that each team member plays a role in the collective team and they stick together. The team hopped on board with the name idea, and they got a Mighty Ducks flag to represent them, and jerseys for each team member. 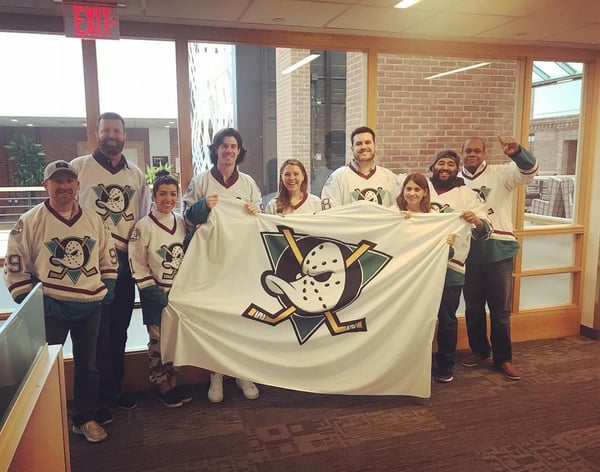 With a creative sales team name, your salespeople will have a sense of purpose and community that helps them learn, grow, and achieve their goals.

Looking for more? Learn more about developing a team selling approach next.