If you Google "How to close a deal", you'll quickly stumble across some tried-and-true best practices for sealing a sales deal. 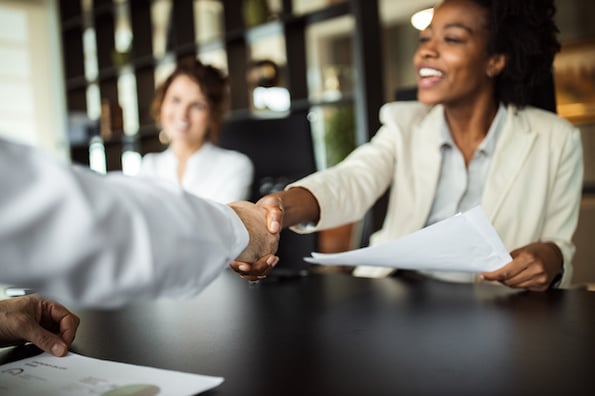 But, in reality, sales deals can be unpredictable and often require sales reps to think on their feet.

Consider, for instance, how HubSpot Executive Dan Tyre once needed to speak at a client's Sales Kickoff meeting to close a deal.

Or how Caila Brandt, HubSpot's Associate Inbound Growth Specialist, took a telemarketing call and used it as an opportunity to convince the caller to purchase from her.

All of which is to say: Closing a deal is rarely a simple experience, and when necessary, you'll need to go above-and-beyond to earn the prospect's business.

1. "I once convinced a telemarketer he needed HubSpot software to succeed."

HubSpot's Associate Inbound Growth Specialist Caila Brandt told me, "Having worked in sales for most of my adult career, I learned very early on, the power of receiving telemarketing calls and the opportunities that come with having a conversation — given I was the one being prospected."

"Not only did I get to understand what you should not do on a telemarketing call, but I also suddenly had an influx of companies calling me, albeit to sell their own product or job."

Brandt continues, "On one occasion I had the same real estate manager (let's call him Ray) call me five times to try and get a family member's house on their books … and that's when it hit me. Yes, I've spoken to Ray five times, given him the same answer every time, and been asked the same questions each time. It was frustrating, to say the least."

"On Ray's fifth call of the week, after recognizing his number on my personal phone, I answered — little did he know he was about to get the pitch of his lifetime. He started with the same questions and I answered in the same way as our four other calls, and then once he finished his questions, I politely asked if he had heard of HubSpot, and used his prospecting time to add value and help with his process."

"After a good 20-minute conversation, Ray admitted to frustrations in their processes, and a real desire for change and support. A meeting was booked that day, and after a demo and process run, the deal was closed and the rest is history." 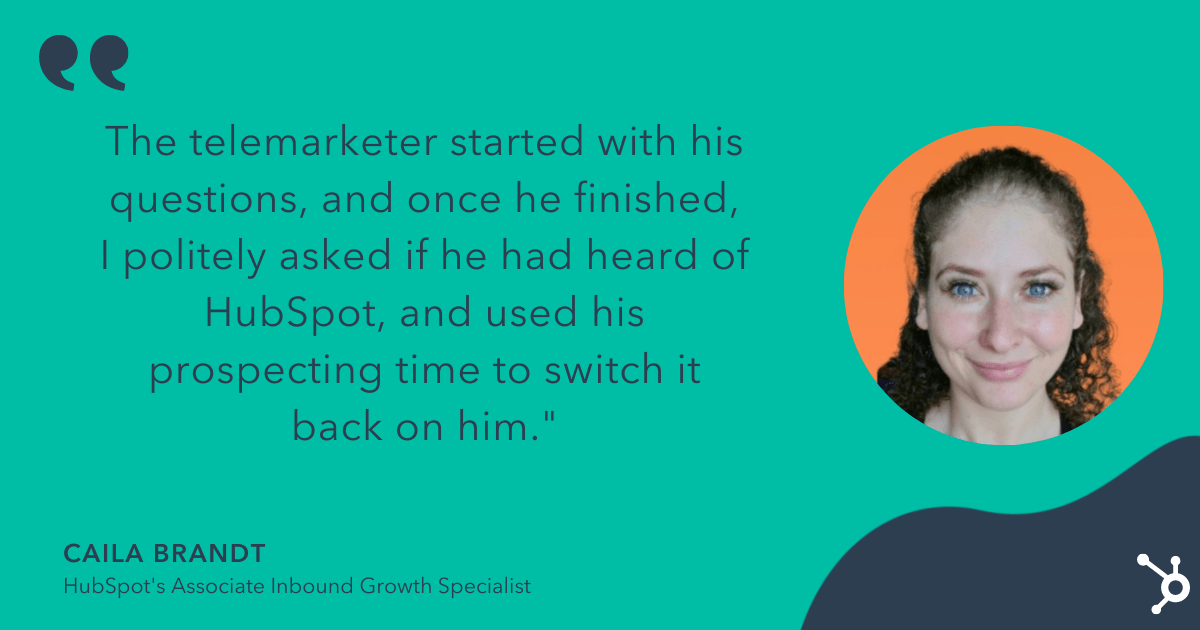 2. "I personally set up equipment at a client's house."

HubSpot Executive Dan Tyre says that, when he was selling computer hardware, he once had a customer who took one year to make the purchase.

Tyre says, "He researched everything to explicit detail. Then I didn't hear from him for three months, despite repeated calls and contact. At the last day of the month, he called me up and asked if I had the complete system in stock."

"He specifically wanted to know if I had a printer cable to connect the computer to a printer and I said yes. He said he would purchase on that day if I brought everything to his house and set it up, as long as I could do it before midnight. I did, and I got the deal."

3. "I took a Friday afternoon off to show up at their shop."

Elizabeth Grip, HubSpot Account Executive III, told me she once spontanously decided to take a trip to a diamond company's office space after a week of no responses.

Grip says, "I had finished what I believed to be a very strong discovery call and demonstration with a local diamond company in Boston. They were looking into one of our enterprise-level offerings and I had all necessary stakeholders involved. After agreeing our next step was to review a contract together, and scheduling a call to do so — I was surprised to find no one in the Zoom when I entered the call." 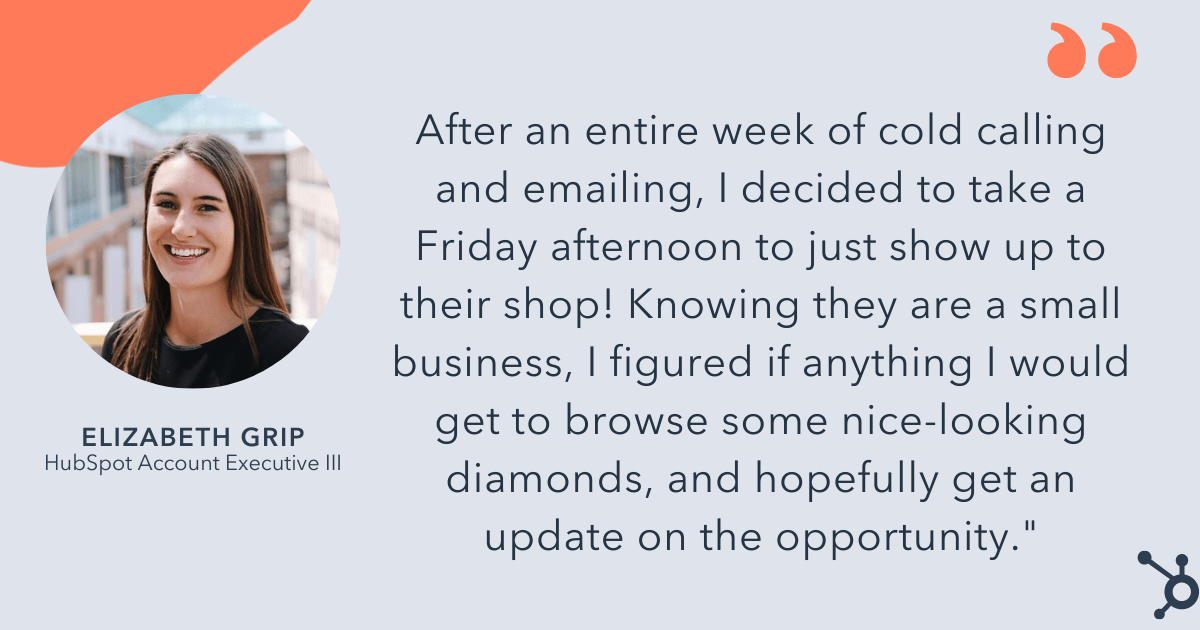 Grip adds, "After an entire week of cold calling and emailing, I decided to take a Friday afternoon to just show up to their shop! Knowing they are a small business, I figured if anything I would get to browse some nice-looking diamonds and hopefully get an update on the opportunity. After traveling all the way downtown — I found out their storefront was closed for the day! Instead, I took a quick selfie of myself and sent it to them in an email."

4. "I sent pizza and flowers to a prospect's business."

HubSpot's Sales Director Tyler Rhodes told me, "My team has had pizza and flowers sent to offices to entice them all to get in a room to sign the agreement."

5. "I delivered a dozen donuts every week ... for eight months."

HubSpot Account Executive Ilias Pishev told me he once delivered a box of donuts to a prospect every week until he sealed the deal — which took eight months.

He says, "When I previously worked in outside sales, I had a target account I had been working with for a while, and after getting to know the main POC, I learned they had quite the sweet tooth and enjoyed donuts."

Pishev continues, "As a point to show how determined I was to earn their business (and my love for donuts, as well), I decided I would pop my head in the prospect's office every week with a box of a dozen donuts."

"Eight months and 384 donuts later, we won their business and a happy customer! We even celebrated the deal over a box of donuts together."

Dan Tyre told me about another time when he was with his manager delivering a proposal to the prospect.

"While he was handing the proposal over, it came apart," Tyre says, "so my manager grabbed a stapler and then stapled the proposal to his tie — which was unusual, but we won the deal." 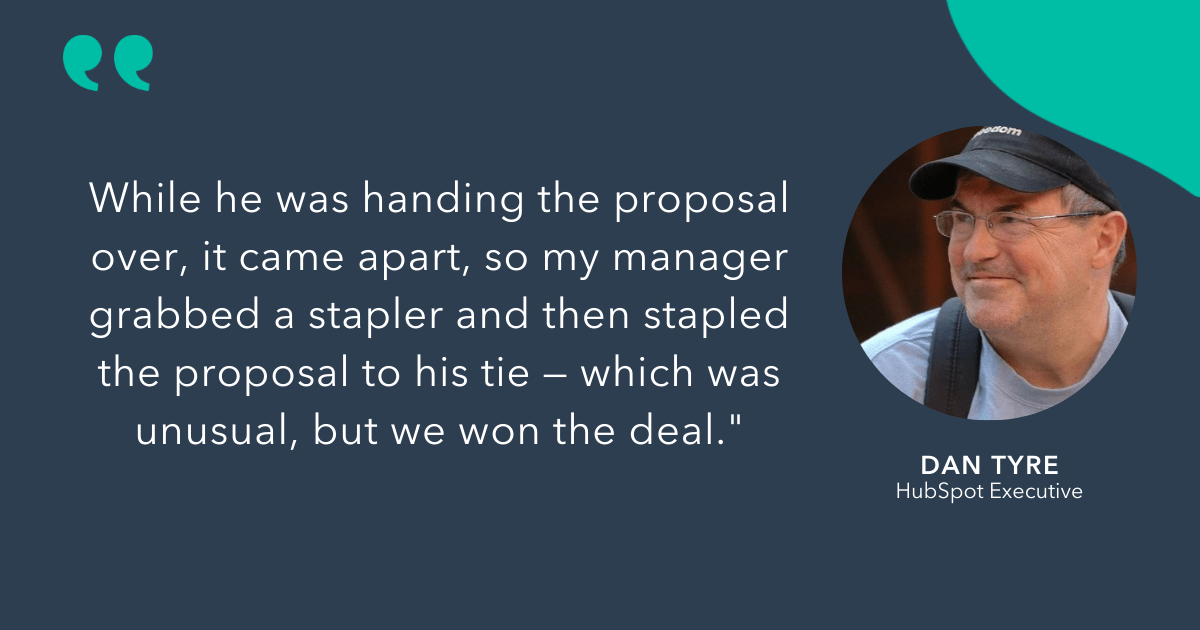 Ultimately, these wild, unusual examples of sales reps closing deals should inspire you to think outside the box regarding how you might close your next deal.

Personalizing the experience for each client, and proving you're willing to be flexible to meet a client's needs, is ultimately key to successfully closing more deals.