How to Recover From a Setback in Customer Service

Former UCLA men's basketball coach John Wooden is a legend. The Hall of Famer brought the Bruins 10 National Championships (an NCAA record), and put together a coaching resume of 664 wins against 162 losses. 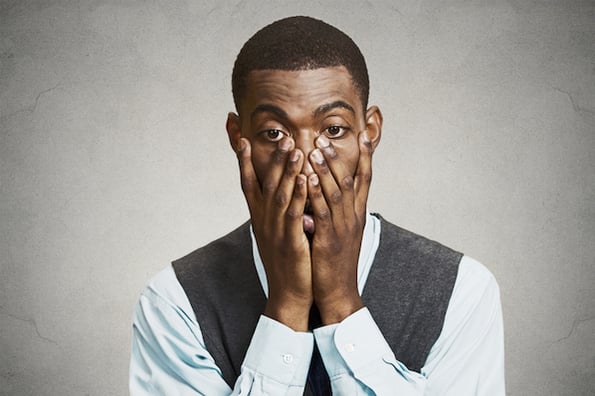 While these numbers are impressive, it still means this leader failed at his job over 160 times. Why do I bring this up? It's to point out even the best aren't perfect.

"If you're not making mistakes, then you're not doing anything. I'm positive that a doer makes mistakes." –John Wooden

Since perfection is out of reach, you might as well prepare for a time when things seem to completely fall apart. You might tell the customer some inaccurate or outdated information, perhaps your attempt to upsell or cross-sell falls flat, or maybe you'll take a page right out of The Office and accidentally copy an embarrassing watermark onto every product that you shipped.

Regardless of what happens, you'll need to find a way to recover from this snafu.

Turns out, a lot of people have kicked around this issue. In fact, the Harvard Business Review polled over 9,000 managers to learn how they reacted to career setbacks. They then sent those results to BU business professor, Dr. Douglas (Tim) Hall. Dr. Hall, along with doctoral student Lan Wang, discovered an interesting trend. Those who bounced back from setbacks most effectively shared three common characteristics. For a more thorough assessment (and because we had six song titles locked and loaded), we doubled down on those points, and that's how this list was born.

Below are six music-inspired tips that you can use to recover from a setback when working in customer service.

How to Recover From a Customer Service Setback

1. All About That Bass – Meghan Trainor

There's an old saying that the best offense is a good defense (or some argue it's the other way around). No matter how you say it the point stays the same; from the moment you start the job make sure you put your best foot forward. Show support for your colleagues and for your company and they'll likely return the favor when you need it most.

Have you stayed late when you didn't want to? When's the last time you peeked over the cubicle wall to ask the person next to you if they needed a hand? These small acts of selflessness will help you build a foundational support system that can assist you when disaster strikes.

Let's say you've gone out and had one heck of a year. In fact, you're a two-time employee of the month (congrats by the way) and have a near-perfect NPS.

However, when it comes time for that big promotion, the boss goes with someone else. So now what?

The first thing you need to do it take a deep breath. Before you can rationally approach the situation, you might want to get away from the issue briefly. Maybe you grab your keys and hit the open road, or perhaps you break out your old Nokia phone and get into a game of snake. Whatever your outlet may be, it should give you enough pause to both process your emotions and let cooler heads prevail.

3. Man in the Mirror – Michael Jackson

Now that you've had a moment to yourself the next part is the hard part: being honest. Were you your best self that day? It's a simple question, but it can go a long way.

Did you truly prepare for this meeting with the customer, or did you blow off researching to instead binge-watch your favorite TV show? Being your best self also means taking care of your body, and it turns out that might be harder than it sounds. One in three adults don't get enough sleep (7+ hours), only 53% meet the CDC's recommendation for daily cardio activity, and three-fourths of the population is eating a diet that's low in vegetables, fruits, dairy, and oils. Taking care of your health is a full-time job, and it's something only you have control over.

4. Little Talks – Of Monsters and Men

Once you've assessed yourself it's time to expand the process. Have you ever noticed that it's really tough to come up with a genuinely new idea? And, if that wasn't the case, would they really need four different versions of CSI: Crime Scene Investigation?

The same concept can be applied to the office. You're probably not the first person to make this mistake, and likely won't be the last. After you've had a real conversation with yourself, try to do the same with somebody you respect. Chances are they might have a similar story of their own.

Just make sure this person will be honest with you and will dish out tough love when it's needed. The worst thing you can do is surround yourself with only yes-men/women as this will prevent you from turning this negative experience into a positive one.

5. Write This Down - George Strait

When you make a mistake, there's perhaps no better way to turn the tables than by gaining a life lesson from the experience. One way to do this is by keeping a daily journal. Here you can write down exactly what happened, and what should have been done differently.

As with anything else, this habit is only effective if done correctly. Psychiatry and behavioral sciences professor, Brett Steenbarger, studied the journal habits of a number of money managers. It turns out those who were the most successful used their journals to both analyze their daily performance and set future goals. This means your journal should help you move past a setback, and not just complain that nobody laughed at your joke during lunch (no matter how funny you thought it was).

Did you know Microsoft co-founders Bill Gates and Paul Allen lost money on their first business together? The program was called Traf-O-Data (thankfully they got better at naming things), and it was designed to monitor traffic patterns. This way counties could identify trends, and learn the best way to allocate their resources.

Problem was nobody bought it, and after six years the company had lost close to $3,500 (or $11,000 today). Rather than get discouraged the two were able to learn from their setback and used the information to start one of the world's most valuable companies. In an interview with Newsweek, Paul Allen called Traf-O-Data his "favorite mistake" because in a roundabout way it led to the creation of the Altair BASIC (alright, maybe we can agree naming things isn't their specialty). According to Allen, this microprocessor was, "The essential step toward a personal computer that anyone could use, and the keystone for the creation of Microsoft."

While you might not turn Traf-O-Data into Microsoft, that doesn't mean you can't transform a customer service setback into your own personal success story. Since I've already used a sports quote, here's something from one of the world's greatest inventors.

So remember, unless you've failed at this job 10,000 different ways, you're still ahead of Thomas Edison.

Master your career in customer support with this free guide.