Picture this. It's 1966 and you've got your bell bottoms on and your lava lamp on full blast, when suddenly, you flip open your local paper and discover that an MIT professor has developed the world's first chatbot. 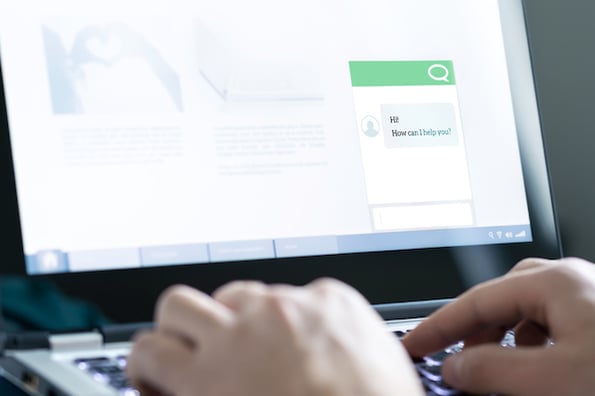 Though we wouldn't know them as "chatbots" until the 1990s, this technology has been steadily improving over the past 50 years. Chatbots today are much more sophisticated than they've been in the past and they can now handle conversations that extend beyond just a simple decision tree.

In fact, in most cases, we don't even refer to them as chatbots. They've since graduated to "interactive virtual assistants" that guide people through the customer experience.

In this post, let's examine how this technology has changed over time and what makes today's interactive virtual assistants different from their chatbot predecessors.

How Chatbots Have Changed Over Time

The First Chatbot, ELIZA, Is Invented

The first chatbot was invented in 1966 by an MIT professor named Joseph Weizenbaum. His chatbot — ELIZA — used a simple decision tree that selected prewritten answers to communicate with its audience. The example below shows us what this decision tree would have looked like.

Today's chatbots do much more than this. But, in the 1960s, this was groundbreaking technology. ELIZA proved that computers were capable of communicating with humans independently. As chatbot technology continued to improve throughout the 60s and 70s, businesses started to realize the potential that chatbots had in the customer service sector.

Chatbots Are Used for Phone Support

The first chatbots used in customer service were actually phone trees. Though phone trees aren't what we traditionally envision as today's chatbots, they were revolutionary when first released.

Rather than having to assign an employee to field every inbound call — whether they were service-related or not — phone trees automated this process by having the customer choose which department or service they want to be connected to. That way, when the customer first calls a business, they aren't waiting on hold only to be transferred by the first rep they speak to and put on hold again.

At this point, text-based chatbots are just around the corner. ELIZA now has a new friend named PARRY and they're capable of communicating with each other. However, the conversation rarely stays on topic and it wouldn't make for a great customer experience.

That's all about to change, though, with the creation of ALICE in the mid-1990s. ALICE, whom you can still talk to today, is capable of maintaining casual conversation with humans. It runs on the XML schema called artificial intelligence markup language, or AIML. This technology helps ALICE choose much more relevant answers from her knowledge base than ELIZA or PARRY were capable of.

The Launch of the Internet Era

Do you remember AOL Instant Messenger? Remember creating your own screen name and customizing your profile?

If you do, you may have had a friend on your "buddy list" named SmarterChild. SmarterChild was developed in the early 2000s and is considered to be the forerunner of Siri. It was designed with the intent to host fun, light-hearted conversations with AOL users, but in practice, it proved it could do much more. You could ask SmarterChild for stock quotes, movie times, even the weather.

While this would be expected by today's standards, this was fascinating in 2001 and it opened the door to a variety of uses that chatbots would eventually fulfill.

At this point, chatbots are powerful enough to enhance the customer experience. But, businesses aren't rushing to add them to their websites just yet.

Chatbots Are Integrated With Artificial Intelligence

Things really start to change when chatbots are integrated with artificial intelligence features. Think Siri, for example, which is an Apple chatbot that not only answers questions, but can also personalize itself to the user's preference. Amazon's Alexa is another good example. Its core features are similar to Siri, plus it can also play games, set reminders, and help you purchase products online.

These are what we usually think of when we talk about today's virtual assistants. And, this technology isn't just something that's used by big corporations like Amazon and Apple. Nowadays it's pretty widely available, and there is plenty of paid and free chatbot software that businesses can use to add virtual assistants to their service experience. One example is Tars, which has chatbot templates for industries like finance, healthcare, travel, and real estate.

The Future of Virtual Assistants

With virtual assistants being so easily accessible, we should expect their popularity to continue to grow over time. Consumers and businesses were already headed towards a digital transformation, and the COVID-19 pandemic has accelerated this change significantly. If we look at the data from HubSpot's Adapt 2020 campaign, we can see that live chat volume has increased over 100% since March 2020 and continues to show signs of growth as we move into 2021.

With more consumers shopping online and working remotely, the demand for virtual assistants has dramatically grown. As people become more comfortable with this technology, it will become a standard that consumers will expect to see moving forward. Virtual assistants are no longer the lighthearted afterthought that businesses use to show how tech-savvy they are, but rather an essential tool needed to provide digital customer delight.

The features that chatbots offer will continue to expand as well. Some chatbots — like the HubSpot one below — have multiple-choice options that users can pick from when asking a question. Chatbot designers are also looking into sentiment analysis tools that can decipher the emotions behind a customer's message. The goal is to make chatbots as independent as possible so they can contribute to a customer service case as if they were a human rep.

Lean more about customer service stats and best practices for 2022.