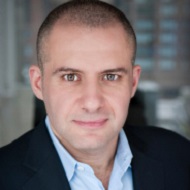 Ronn Torossian is the President & CEO of 5WPR, a leading PR Agency. The firm has been named repeatedly to the Inc. 500 list and has represented a myriad of leading clients, including Coca-Cola, Anheuser-Busch, McDonald's, VeriSign, Seagram's, and others. In 2013, 5W was named "Agency of the Year" by the American Business Awards. Torossian is a 2013 winner of PR Executive of the Year for the American Business Awards, and is a past semi-finalist for Ernst & Young's Entrepreneur of the Year. He is regularly featured in the national media, and was named to both PR Week's "40 Under 40" and Advertising Age's "40 Under 40" lists. His best-selling PR book “For Immediate Release: Shape Minds, Build Brands, and Deliver Results..." reveals how public relations is essential for the success of any business. Ronn is regularly featured in major media outlets including Huffington Post, CNBC, New York Times, Fox News, and many more.