Get to Know the 2014 Grand CLIO Award Winners

This week, the CLIO Awards announced the recipients of the Grand CLIO, honoring innovation and excellence in advertising, design and communications. 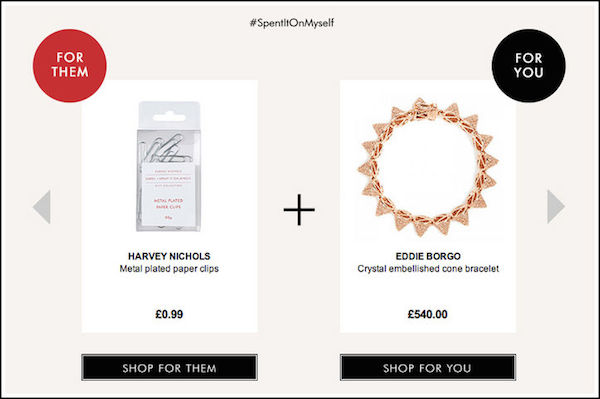 Many of the agencies, brands, and campaigns are recognizable from this year's Cannes Lions and D&AD Awards, and there are a few recognizable themes that can be pulled from this group of memorable campaigns:

Check out these nine categories for Grand CLIOs and the campaigns recognized:

The animated short film detailing the journey of a Scarecrow who looks for natural, wholesome food options made a big splash in the media when it was released in September 2013. The video has been viewed more than 13 million times as of September 23, 2014, and the iPhone/iPad app was downloaded by more than 250,000 people within the first four days of its release. "The Scarecrow" was a big winner at Cannes, and it continues to be one of the best examples of compelling storytelling by a brand.

Advertising construction trucks doesn't usually catch the attention of consumers or judges, but a showcase of Jean-Claude Van Damme's flexibility does. The campaign started a movement -- spurring thousands of spoofs and media mentions. The "Live Test" videos also included a highliner walking across two moving trucks and a hamster named Charlie driving (spinning the wheel by following a carrot) up a windy, rocky hill.

In the Philippines, children haul heavy bags full of textbooks to and from school each day — causing deformities in some and creating a school room of physically exhausted children. Smart Communications transformed textbooks into 160-character SMS messages and placed them on SIM cards for mobile devices — turning them into simple e-readers.

Sorry I Spent it on Myself

Harvey Nicols played up the selfish side of the holidays with a campaign that encouraged consumers to buy low-cost presents so they could spend more of their hard-earned paycheck on something they wanted. The marketing ploy included a gift product line (a sink plug, paperclips, a bag of gravel), and created such a buzz that the wooden toothpicks sold out within a few hours.

The film details the lives of Sapuers (Congolese Society of Ambianceurs and Elegant Persons) — men who live in Brazzaville in the Republic of Congo and don themselves in brightly colored, three-piece suits, creative outfits (including a kilt), hats, and silks. Emulating the aristocratic Parisians who settled in the area in the early 20th century, these dapper gentlemen use clothes as a creative outlet and distraction from the country's volatile recent history. The film ties into Guinness's "Made of More" tagline.
Agency: Abbott Mead Vickers BBDO

Digital billboards don't typically spark our interest, but British Airways and OgilvyOne transformed the out of home medium into an interactive ad. Appearing on each billboard was a child who moved and pointed to a plane flying arriving or departing from London's Heathrow airport, along with text that announced where the plan was coming from or headed to. This reactive ad was the result of a complicated process. An antenna was placed on the roof of a nearby building, which gathered data from the plane's transponder to identify the flight number. When the plane entered a specific zone, it would send a message to the billboard to begin the display. And by using cloud altitude data, the ad would only be shown if the plan was actually visible.

Sorry I Spent it on Myself 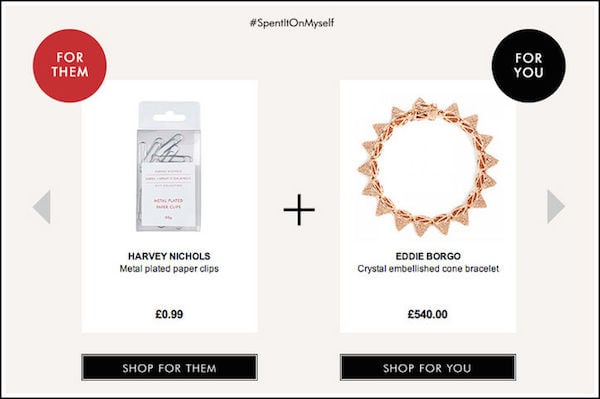 Leading up to the launch of the campaign, Harvey Nichols released a print campaign and a promotional video, teasing the products — such as Christmas in a can. On the day of the launch, it released a series of commercials (online and TV) showing the receiver of its budget-friendly gifts opening their presents. The 26,000 low-cost products sold out within three days. 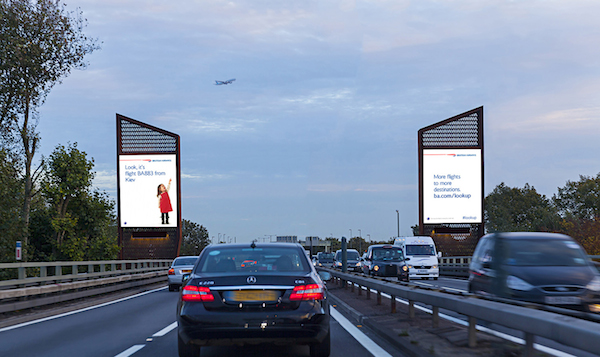 "Magic of Flying" also won in the out of home category for its reactive, technology-based outdoor campaign.

Building on a traditional insult to girls — and women — P&G's campaign is brilliant and shocking in its simplicity. You run "like a girl" or throw "like a girl" are traditional slurs thrown around on the playground, but why are these insults? With no fancy visuals or trickery, the ad reveals how young girls don't have some preconceived notion of "how" they are supposed to run or hit or throw — but at a certain age, other people's perceptions of how they should act becomes their reality.