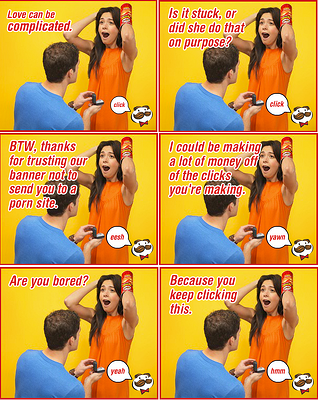 The first banner ad had a 44% click-through rate.

This week, we celebrated the 20th anniversary of that first banner ad. The advertising industry has had 20 years of seizure-inducing, flashing banners, multi-colored "Congratulations" signs, and calls to download the greatest set of emoticons in the history of the yellow characters.

But it hasn't been all bad. There are some brands and agencies that have found that structure and rectangles of a certain size provide a perfect forum for creativity.

Here are 12 examples of banner ads that will make clicking irresistible:

The brand introduced its new Golf GTI in the Netherlands by racing the car across various different media sites. To create the experience, the agency had to paint full-size versions of the sites and film the racing vehicle in a way that would align with each site's ad space.

Even if you're not a fan of classical music, this interactive banner ad from MetLife will have you wanting to keep tempo. The ad appeared on the homepage of the New York Times and encouraged viewers to use their keyboards to keep up with Schroeder's dizzying pace. Participants could share their musical scores on Facebook.

Stride gum promotes its long-lasting flavor, so it challenged the people of the Internet to see how long they could last clicking a banner ad. The record? 67 minutes. And this was no easy feat. The person had to avoid the temptation to click on videos of cute kittens and adorable babies.

Homeless Banners from Garbergs on Vimeo.

The non-profit had a small budget but an important problem to tackle -- raising money to help the homeless communities of Sweden. The charity created a campaign where people could embed "Homeless" banners on their sites. The longer they were hosted and the more people who clicked on the banners, the warmer the color tone of the originally gray banners would become. More than 415 sites hosted the banner, resulting in 36 million views.

Typically, when you click a banner ad, you are sent to a website, so it can sell you something. That is the basic premise. Pringles won a Cyber Lions in 2009 for its banner ad that just wants you to click, and click, and click. Truthfully, I was about 20 clicks in before I stopped -- of course, it was all in the name of research. You can click away here.

This classic TV campaign is also known for its interesting use of display space. John Hodgman, the PC guy, comments on the top banner ad that displays the results of a Forrester Research study and has a conversation with "Before" and "After" guys in a Hair Growth Academy ad.

This sidebar ad for Adidas provides the viewer with a black pen, prompting you to draw a line that becomes a course for the runner. Buildings, vehicles, and vegetation add scenery to the runner's course.

This banner ad was powered by the search function on the Dubai-based house hunter website. Based on the visitor's selection of price range, family size, and other criteria, the banner would feature a car model that was the best fit for that individual. This is the definition of personalization.

Uniqlo created widgets that bloggers could install, creating a viral banner campaign. Visitors would turn on a "switch," which would change all the banner ads spaces into lucky tickets. The banner ad campaign generated more than 3 million clicks.

To promote the vehicle's new accessory kit, the brand created voice-controlled banner ads. Viewers could connect their Facebook accounts and call a friend using voice commands. To extend the experience, the video screen was customized to look like the caller was in his vehicle.

The Swedish manufacturer is known for its space-conscious furniture, but it also knows how to make the most of banner ad real estate. Viewers could hover over the ad, and a product would come into focus. A click on a specific item would send the person to the site to purchase.

To showcase the different uses of the iPod touch, including games, FaceTime, and video, the brand used the traditional leaderboard space and ESPN's masthead to create a visually engaging experience.