30 Years Without Management: An Agency's Successful Experiment With Holacracy

Earlier this year, Zappos CEO Tony Hsieh sent an internal email, stating that employees could either adopt Holacracy or they could leave the company with a three-month or more severance package.

This ultimatum resulted in the departure of 210 employees or 14% of Zappos’ workforce -- no small exodus.

Just why was Hsieh so bullish about a new management system not only being embraced wholeheartedly but being adopted more quickly and with more passion?

He sees Holacracy, which has been a rising management trend, as a way to increase efficiency, autonomy, and performance -- all necessary for modern, responsive companies.

But while Holacracy might be a modern -- seemingly radical -- approach, it has been the standard operating model for California-based agency Phelps for more than 30 years.

Holacracy is a management style that eschews management-controlled power and instead puts the responsibility on the processes and the people doing the work. It favors self-organizing, small teams -- called circles -- that make quick, consensus-based decisions. Individuals’ roles are flexible, rather than tied to outdated job descriptions and a set of mandated responsibilities. It’s about what the team decides needs to be done and who is the best person to do it.

The lack of hierarchy does not mean chaos is acceptable. Structure and processes are key to making Holacracy work. Authority and decision-making is delegated to those closest to doing the work or those who have been designated as accountable for a project or area. Team leaders support the team in their needs by recruiting or transferring team members to other circles.

Holacracy was codified in 2007 by Brian Robertson, who felt stifled by the hierarchical structure that favored processes over people. He formed HolacracyOne, an organization built to standardized and package the management style for adoption. 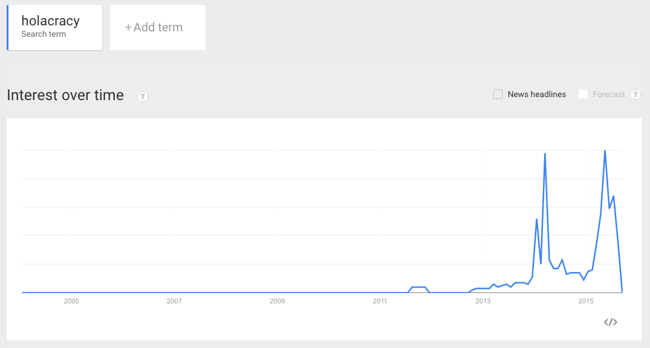 But prior to this organizational design becoming a trend, Joe Phelps was using its philosophies to create a different type of agency based around client-based teams. Founded in 1981, the agency formed around the Fender account. When they next won their next account with Baldwin Piano Company, he replicated this structure based on what the client needed. It was an organic path to Holacracy -- one that was based on how best to deliver work for clients and how to facilitate employee happiness and growth.

“You'd think pianos and guitars have a lot in common, but they really don't when it comes to selling because pianos are sold to mothers of children 6 to 12 and guitars are sold to young men,” Phelps said. “At that point, we divided into separate client teams, and we never departmentalized.”

He also chose this structure because he had previously worked in two multinational agencies. He saw ideas travel up and down the layers of decision-making and often be destroyed by department directors who didn’t have enough knowledge of the client's needs.

Why the Traditional Agency Structure Is Flawed

Most agencies are organized by function: The research department provides findings to the strategist who hands things over to the designer who then ready the assets for the media people. This function-based style was born out of manufacturing firms. Things need to be done in a linear fashion.

“The problem has been that organizations stay organized like they are in the military or in the Industrial Revolution,” Phelps said. “All these top-down, commandment-control, assembly-line type processes don’t work with knowledge workers nowadays.”

This may have worked somewhat better when print and TV ads were the main marketing vehicles, but today, there are too many channels. Technology -- and with it marketing -- is moving too fast for rigid, sequential processes. Similar to the adoption of Agile development and project management in the software industry, the agency model needs to be more responsive to the changing and varied needs of clients.

“Clients need things constantly faster, better, and at a better value,” Phelps said. “It used to be that of the fast, better, and low price, you had to ‘pick two.’ Now the digital hardware and software products have helped to deliver all three.” He continued, “Small teams move much faster than unwieldy departments dealing with each other.”

And this fits into how we execute on marketing today -- many brands have escaped the 6-month or 9-month campaign cycle and instead want to launch smaller campaigns that are more in-tune with what resonates with their audience now. Waiting to send out a tweet for even 30 minutes might mean losing an opportunity to be relevant to a consumer conversation.

In addition, Phelps pointed out in his book Pyramids Are Tombs, published more than 12 years ago, that function-based and matrixed teams -- the latter being those organized by a PR department, media department, creative department, etc. -- are constantly in a state of conflict.

He writes: “The people in these departments officially report to their department or division manager. Yet they work on specific accounts, so they are also on those informal client-based teams. The question always arises: ‘Am I working for my department manager or the client?’”

How Phelps Organizes Around Clients

For Phelps, independent teams are organized around clients and can be built and broken down based on the needs of the brand. Team members report directly to the client and are expected to take the initiative to make decisions for the benefit of the client. What's good for the client is good for the agency.

Each specialist on the account -- PR, media, copywriting, design, etc. -- has a team coach, but this person does not deliver top-down decisions. They are responsible for educating people across the company about their discipline and staffing client teams. However, they do serve as the final end point for client-related issues -- if it gets that far.

This type of structure has a few benefits for individual employees: Without layers of approval, marketers and creatives can focus on making great work and seeing the direct impact for the client as a result of their labor. Because there is no where to move up -- besides working on larger and more prestigious accounts -- internal political issues are removed. There is no high-level creative director taking credit for another employee's idea, said Phelps. Compensation is solely tied to individual performance and excellence. And because in a small team everyone’s contribution matters, members push one another to produce their best work -- no one is able to “cruise” through a project.

And this structure has worked for clients. While the average client tenure with an agency is thought to be less than three years, Phelps has been working with Panasonic for 29 years, Tahiti Tourism for 23 years, and Whole Foods for 13 years. Overall, 60% of its clients have been with the agency for an average of 13 years.

“Our new business that comes in is really the result of our service to our clients that then go to work somewhere else or suppliers that see how we work, so there are a lot of seeds out there for future growth,” Phelps said. “We have a rule. Current business before new business.”

4 Elements to Focus On to Create a Holacratic Organization

Holacracy, while it changes the organization structure and how teams are made up, is really about authority. Power shifts from one or a few people to the processes and the makers. For this transformation to self-directed, autonomous teams to work in your own firm, you need to focus on four main things.

Individuals, rather than a management team, are personally responsible for the relationship, for the work, and for the decisions made. This is an intimidating idea for some leaders, as control is no longer in their hands. Trust must be given freely. When this is done, trust increase between both parties.

Because things are moving more quickly and decision-making should be done by a group, employees have to commit to candor and constructive communication.

3) Openness to feedback and collaboration outside the team.

Phelps has 11 listed ways employees can and should give feedback to one another. The main way is through showcasing work to the entire organization. People are expected to use the commentary and questions to make better decisions for their clients and a better final creative product. This type of openness isn’t the norm in most agencies, where creative egos and sensitivity can silence a detractor. In reality, having your work on display for anyone to examine can be intimidating, but this is necessary for the amount of freedom given.

“Feedback is the critical counterbalance to the autonomy enjoyed by self-directed teams,” writes Phelps in Pyramids Are Tombs.

In addition, the agency gathers feedback from clients, suppliers, and even the families of employees to better understand their business and employees.

4) Embody the core values of Holacracy.

The only way this type of management organization works is if you hire the right people. This is why Zappos mandated that people either buy-in or get out. Individuals in a Holacratic organization have to be self-motivated, able to both give and take critique, and ego-less. Without the right individual mindset, it would be easy for power, control, and privacy to once again become the norm.

This is especially true when it comes to judging work and client demands.“If it's not political, then the decision will be based on how good the work really is,” Phelps said. “If it has to do with who gets credit for what, now we're straying from what's best for the client.”

Customizable templates designed to serve as the blueprint for your next campaign.