What is WhatRunsWhere, and how did you and your team get started in this field?

WhatRunsWhere was actually started as a personal project when I was an advertiser myself. I wanted strong intelligence on large-scale media buys before risking my own money, and at the time, there was no tool available that was up to the task. After I created it, people began offering to pay for access, and the time that it took to maintain the system made it difficult to advertise myself. From there — quite by accident — my job became WhatRunsWhere. It’s been a long road taking WhatRunsWhere from a personal project to an enterprise-grade competitive intelligence solution, but it’s been a blast every step of the way.

How should the marketing/advertising industry utilize WhatRunsWhere to create better end-results for its clients’ content and online marketing strategies?

Right now, a big part of advertising is testing — finding placements, finding strategies to gain attention and increase conversions and finding traffic sources that cater to the needs of your niche market. WhatRunsWhere lets other people do that testing for you. We let you learn from the mistakes and successes of your competitors, saving you tens of thousands of dollars. We’ve even begun to give suggestions — placements that your competitors are not presently advertising on but have a high chance of success.

What trends and changes in the market led you to realize that WhatRunsWhere would fill a void? Describe the void.

The realization of the void that existed was driven solely by utility. I wasn’t out looking for a market to fill as a service — I was looking for a product I needed myself that simply didn’t exist.

When WhatRunsWhere started, it was a great time to be a techie in the advertising space. There was a noticeable lack of software in numerous areas that you could put together yourself and get a huge advantage with. Building a simple tool like a bulk advertisement submitter or an analytics package could make you tens of thousands of dollars through personal use, and a more complex tool like WhatRunsWhere could make you much more. One of the big transitions that occurred over the past couple years that we were a part of was moving those utilities outside of the private realm and into the publicly visible market.

What are some of the features of WhatRunsWhere that distinguish it from other competitive intelligence tools for online media buying?

We place a large emphasis on mobile and international markets and display many more fine-grained details than our competitors: ad servers, banner hosts — the works. I would say our primary benefit though is that we don’t only find ad networks that are commonplace. Our system is designed to allow us to very generically identify banner ads, then classify later. What this means is that if a new ad network launches while we’re asleep, we have their data in the morning — even if we’ve never heard of them before.

Tell us about your mobile data insights.

We’re proud to be the only company we know of offering this intelligence. Our mobile product functions just like our display product, but for the mobile web. What’s really valuable here is that it allows companies to break into mobile while limiting risk. A lot of brands are looking at that transition but want to see what others are doing first to get a good grasp of the landscape before they jump in.

What is your advice for designing display ads? How can agencies get the attention of consumers who may be blocking out these types of ads?

With a hook to bring them in. Ask a question, have a small teaser of information, set the context for your story...anything to make the person curious.

What are some common misconceptions in the digital media buying landscape? How can insights from WhatRunsWhere better inform ad placement decisions?

I think one of the major misconceptions is the difficulty of entering international markets. There’s a lot of companies that keep their ad buys in the “tried and true” English-speaking countries: the United States, the United Kingdom, Canada and Australia. What matters isn’t really language or country — it’s credit card penetration (especially for direct response ads).

How do you see the online advertising space evolving in the next three to five years? How will advertisers combat all the clutter and stand out in a crowed digital environment?

I don’t think it will be crowded; I think it will be larger. Digital devices are becoming more and more a part of people’s lives. Between mobile, current viable international markets and the ones on the rise, I think we will see the landscape expanding just as fast as demand. More and more people spending more and more time in more and more places consuming digital media will drive the industry upwards for a very long time. We’re already seeing the growth of Asia and Latin America, and some day, Africa will follow as well. 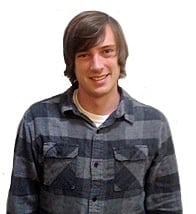 Michael Cojanu is the CEO and co-founder of WhatRunsWhere. Previously, he ran a boutique performance marketing company. Michael started working in the online advertising space at the age of 15. He is passionate about advertising technology and big data.