What We Can Learn From the 7-Footer on the Airplane

I'm tall. I haven't been measured in a while, but I'm probably about 6'5''. I can't remember the last time a week passed without someone asking me if I play basketball. Once, I applied for a job as a meteorologist, my only credential being that I was tall enough to know what the weather is like up here. I got called in for an interview. 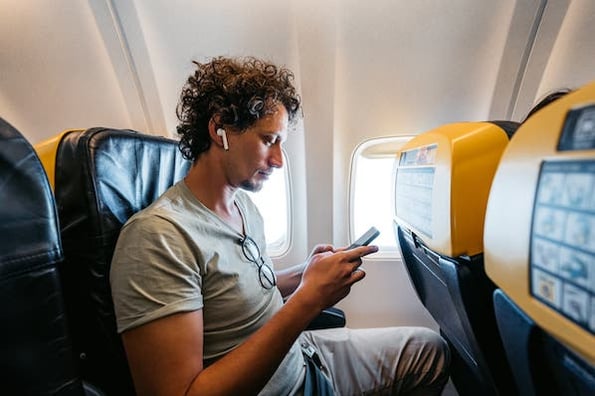 You get the point. I'm tall.

But I'm also at about the maximum height where I can still fit into normal society. I still walk into my fair share of low-hanging branches, but life isn't all that bad at 6'5''. And nothing reminds me of that quite like seeing what I saw last month.

I was sitting on a plane — bulkhead seat, lots of legroom. And then this guy got on the plane. He was a full foot taller than me. He sat down in the seat next to me, and I looked tiny. He towered over me — while sitting.

I've never felt that small before.

But what's stuck with me is the image of him just trying to walk down the aisle. He was hunched over at the waist, just trying to squeeze his body inside the plane. Here's a guy who was just far too big for a world that had already decided how big was big enough. He simply didn't fit.

I think this is a pretty good metaphor for how companies fail to adapt to really big ideas.

How High Is Your Ceiling?

Most companies work like that airplane. They build a structure. Employees work within the structure.

And for the most part, companies work alright within this framework. It's comfortable for most, and it's rigid, and it works.

Except that outliers don't fit. You can't be seven feet tall and stand up on an airplane. The structure won’t let you.

And at most companies, you can't come up with a massive idea and expect the infrastructure to hold it. The idea might get compressed and bent to fit into the structure that exists — if it gets acted on at all.

I'd argue that there's a better way. A great company is only as good as its best ideas, so build worlds that can stretch to contain great ideas.

An example: There's a east coast design and marketing firm called Viget. Mostly, it just builds web stuff for brands. But one day, an employee comes in with a really big idea: Our employees spend a lot of time speaking at events, but what if we created a product to help event organizers find qualified speakers?

At most companies, the boss would say: “Well, that's interesting, but it's not what we do.”

But they're not Viget. Viget recognized that it needed to be able to create room for flexibility in the company. So Viget says, “Sure! Let's build something and see what happens!” And that's how a product like SpeakerRate gets born. There’s even a digital home to show off all the other random and interesting products that stemmed from ideas that didn't quite fit, but Viget still wanted to pursue.

You can bend people to your world, or you can let them break through ceilings.

What kind of office do you want to work at?

The other complicated thing about all this: Creating not just an infrastructure, but the right environment for great ideas to grow.

I've seen enough companies that say, “Sure, we love big ideas!” And then someone proposes one, and it gets laughed at. The meeting ends, and the whispers begin: "Can you believe so-and-so actually suggested that?"

And as a tall guy myself, I'm used to these whispers. I'm used to walking past a crowd, and then hearing people say, always in voices louder than they think, "Can you believe how tall that guy was? You think he plays basketball?"

The 7-footer at the airport? I was a few steps behind him exiting the plane, and I heard a dozen people whispering just that. Everywhere he goes, people treat him like he's barely a part of our society. Like he doesn't fit in.

Because, well — the world we've created for ourselves isn't capable of holding him.

We can start by accepting the 7-footer in the room. Time to stop pretending like he fits with what we've got.

Time to build a better airplane.

What We Can Learn

Start With Culture - Make your workplace a place where people can pitch big ideas or crazy ideas. Welcome them. Integrate them into your business.

Be Flat - If people from all parts of the company can't talk freely about ideas, then you've got ceilings in place. Find ways to break down those barriers.

Listen - Some of the best and biggest ideas sound completely crazy at first. Don't dismiss them. Listen, offer constructive feedback and work to make those really big ideas into something real.