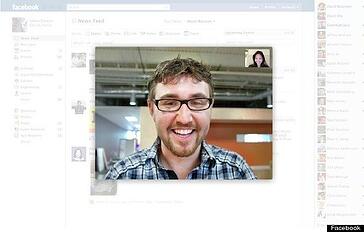 It was a big news week for Google last week, and the announcement of its new Google+ social network had a lot of us wondering, "How will Facebook respond?"

Well, our questions were answered yesterday. Facebook unveiled its new partnership with Skype to launch a new video calling feature within Facebook , which has already begun rolling out to users. In addition to video calling, the social network also revealed its new design for chat as well as a new group chat feature .

The new features were announced by Mark Zuckerberg himself at a press conference in Palo Alto, which he previously hyped would be nothing short of " awesome ." Before we dive into what all this might mean for us marketing folks, let's revel in a few impressive stats shared at the press conference as well as discuss more detail about the new features:

During the press conference, which was livestreamed ( view the recording ), members of the Facebook team demoed the three new features:

1. Group Chat: Now Facebook users can use chat to instantly message more than just one other Facebook friend at a time. Within the current chat feature, they simply click "Add friends to chat" to enable group chatting capabilities.

2. New Chat Design: The new chat design will take into account a user's browser size by adjusting to that size, and it will automatically show the sidebar if the display is large enough. The design also introduces a much more organized contacts sidebar sorted by friends a user historically chats with the most, offering an improved user experience.

3. Video Calling: Already launched to millions of users, the most impressive of these three new features enables users to video call and chat with their friends directly within the Facebook website. Users must install the feature to access it, which is offered in partnership with Skype, but if a user calls a friend who has not yet downloaded it, he/she can easily and quickly install it on the spot and accept the video call. Within Facebook, users can launch video calling through the chat feature, and with just two clicks, they're connected! Facebook will be rolling this out over the coming weeks, but if you don't want to wait, you can get it today .

These new Facebook features are mostly just available via the web version of Facebook, with the exception of group chat, which is currently available on mobile devices as well.

Zuckerberg says that Facebook wants to be the go-to place for social infrastructure, and this move only brings them closer. It definitely puts them in a better position to compete with Google+'s new hangouts feature. While only time and experimentation will tell what this all truly means for marketers, we have a few ideas about how Facebook's new features can be used for business :

While it's not a feature available by Facebook right now, I can see some really cool applications of a video calling/livestreaming feature that would allow a broadcast to multiple Facebook users. Think online press conference via Facebook to your fans, or something similar. We'll just keep our fingers crossed...

What do you think about Facebook's new video/chat features? Are there marketing applications? Will Facebook video calling ultimately replace the independent Skype platform for business use? Share your thoughts!