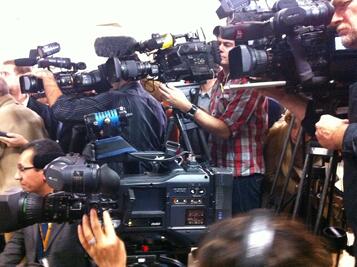 When you're trying to promote your business, share news about a specific accomplishment, or publicize a company milestone, you inevitably hope you can get some media attention out of it. These days, not only can you attract the attention of traditional outlets including newspapers and television stations, but you can also look to bloggers and online outlets for coverage and exposure.

Before I became media relations specialist at HubSpot, I spent ten years on the "other side." I was an anchor, reporter, and web producer for several news stations, and I'd earned my bachelor's degree in broadcast journalism. I've been on the receiving end of quite a few press releases in my day, and I've been contacted by plenty of people who do exactly what I do now. In a nutshell, I've gathered a good amount of insight from spending time in the media world.

Therefore, I've put together a list of helpful tips about what you should (and shouldn't) do to develop positive relationships with media outlets and attract their attention when you have a story to share:

1. Do Your Research: When contacting the media outlet, make sure you’re contacting the right person. You don’t want to email or call the health producer/editor if you’re looking for the technology or business section.

2. Use Your Connections Wisely: If you already have a relationship with someone at an outlet, you can use that to your advantage, but you still want to get in touch with the appropriate person for the story. Ask your contact who that is, or call the main number to find out.

3. Don't Spam: When emailing an outlet, make sure you’re not emailing everyone there. This often happens when auto emails are sent. What happens is a newsroom has a generic email address (XYZ@newstips.com) and messages sent to that address get sent to many people within the newsroom. It’s annoying to the media, and when multiple emails are sent from the same address with the same message to multiple people, those emails will ultimately get trashed. They may be individually addressed, but it won’t matter. Thirty emails from one place at one time will get ignored.

4. Be Smart About Scheduling: If you are scheduling an event – a launch or ribbon cutting or any other event – schedule it for earlier in the day. When taking into consideration local television schedules, the closer it’s scheduled to deadline, the less likely the event will be on the news. Instead, try 10:30 AM. It leaves enough time before a noon broadcast and plenty of time before the evening newscasts. It also allows newspaper reporters and editors to get the story wrapped up early, which is always appreciated.

5. Carefully Choose Your Backdrop: Another consideration to make when you're scheduling an event is to think of your backdrop. Take hints and guidance from events you've seen in the paper and on TV. Most of the time, a banner will not be part of the picture unless the person speaking is standing directly in front of it or wrapped in it. A white-walled conference room with lots of windows may give you a great view of the city, but the shades will probably be closed in order to even out the light. And DO NOT stand in front of those windows; it will look like you've entered the Witness Protection Program. Take a picture of someone with no flash and the sun at their back, and you'll see what I mean.

6. Don't Be a Pest: Do not call the newsroom to ask whether they will be covering your event. Coverage decisions are fairly last-minute and are generally made the day before. They might even change the morning of your event.

7. Be Yourself: If you do call the newsroom, be conversational. These are people just like you and me. Treat them that way. Also, take timing into consideration when you're calling. There's no worse thing than calling during breaking news (check Twitter or Facebook or even the outlet's website) or just before a newscast.

8. Take Advantage -- But Don't Exploit -- Relationships: Once you have a relationship with an outlet, don’t exploit it. Instead, use it to your advantage. Don’t contact the outlet whenever you get a new customer or that customer sneezes, but do let them know of bigger events like expansions or milestones.

9. Learn From Your Experiences: Finally, don’t be afraid to ask questions. If you feel like you’re not getting the message across, ask the person with whom you’ve been in touch what you could do differently to get more attention. Remember, sometimes it’s all just a matter of timing.

What other tips do you have for attracting media attention ?