Google+ is growing like crazy. In fact, it is the fastest growing social network ever. Just as with any other social network, marketers have a lot to learn and do. So we thought we would invest some time into making your life easier. In this post, we've compiled the best content about Google+ from all across the web. Use it to learn how to leverage Google+ for both business and personal uses.

Google Profile – your personal home on Google+, which allows you to share interesting, work experiences, personal information, and much more

Sparks – the magazine of Google+, which bring together information on a topic for easy viewing. Enter a keyword, and see public Google+ posts on that topic.

+1 Button – the equivalent of the Facebook Like button for Google+ and Google Search. A user can +1 an item shared on Google+ as well as a search engine result link returned by a Google search.

Let's start by checking out this awesome cheat sheet that provides some helpful tips for making the most of Google+:

Should Facebook be worried about Google+? Take a look at this awesome infographic and see for yourself.

Who is on Google+?

Ever wonder who is actually using Google+? This infographic (larger version here) show that students are major early users, but it also shows many of the companies represented on Google+. 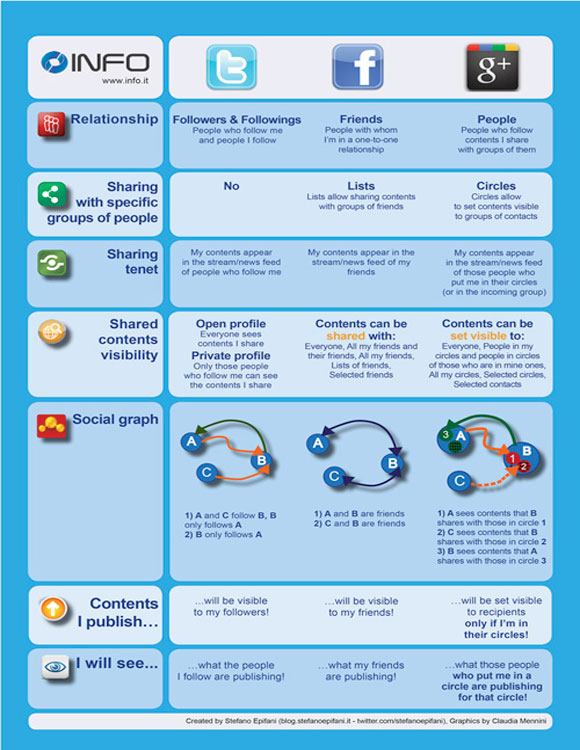 Google+ According to Google

What does Google want you to know about its new social networking platform? Many things, but some of the most important things are included in the following short videos. Give them a look if you want a better understanding of Google+'s features.

The Google+ Project: A Quick Look

Get a complete walk-through of Google+ with this presentation, which provides detailed information on how to get started with the new social network.

What other awesome Google+ info have you come across on the web that should be included in this post?