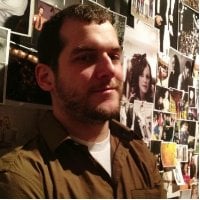 Last week, Dreamforce 2011 became one of the largest software technology conferences in the world. While I was there contributing to HubSpot's presence at the event, I couldn't help but think about all the SEO parallels -- how a search engine would approach the crowd at Dreamforce as well as each space on the expo floor. After reflecting on those items, I broke them down into three big SEO lessons from what HubSpot did at Dreamforce that made us such an attractive target for people at the show, and what made the show a success for us overall.

First off, creating remarkable content will help you get found, regardless of where you put it. We created a series of non-descript booths with no signs, names, or banners hanging from the ceiling. Instead, we decorated those booths with staff dressed in orange jumpsuits and holding toy unicorns and iPads. As a result, people couldn't help but approach us to ask questions and learn more. We also created an interesting iPad app that we demoed, which ran a Website Grader report for a person's website and a competitor's site. Our content stood out against the grey curtain backdrop, and people wanted to engage with us. This is rule one of inbound marketing and search engine optimization: create awesome, remarkable content that helps you get found online.

Lesson #2: Let Your Swag Drive People to You

The unicorns were like a badge or widget on the web -- every single one was displayed, and they brought more people to us. People saw others walking around with little toy unicorns and wanted to learn more and visit our site as well. Just like distributing a badge or widget to other websites, every unicorn we gave away only further amplified our efforts and spread the word about what we were doing.

Every item was the offline equivalent of an inbound link to our website. It spread the word, and people who were mentally searching for "cool stuff at Dreamforce" kept finding unicorns and orange jumpsuits. Just like Google's algorithm, all of those inbound links kept pointing people back to us at the conference. Be the same in your search engine optimization. Create a widget, badge, or other item that people will want to show off on their website or blog, and each one will become an inbound link for your site.

Lesson #3: Don't Bombard Your Audience With All Your Content at Once

Just because you have a ton of great content created and you're starting to pick up speed, doesn't mean it's time to blow out your whole funnel in one go. Unfortunately, we had only been able to acquire about 3,000 unicorns before we completely exhausted the supply of unicorns in the United States. After giving away almost a thousand on day one, we knew that we had to ration out our unicorns. Our brand impressions and activity at the end of the week would have been severely limited if we didn't have any unicorns left to give out.

And while we would've still had our 'un-booths,' it would have been harder to generate new leads and attract visitors to our booths without lots of unicorns floating around. Therefore, we had to consciously spread out their distribution in order to get them in front of as many people as possible. This same lesson holds true for your blog. If you front load your blog by publishing five articles in the first week but then have nothing left for the rest of the month, it will be much harder to keep a consistent flow of audience and traffic. Space out your content, and make sure you have a steady flow that will attract search engines and users back reliably.

How SEO is Different Around the World, According to HubSpot Content Strategists

Predictive SEO: How HubSpot Saves Traffic We Haven’t Lost Yet