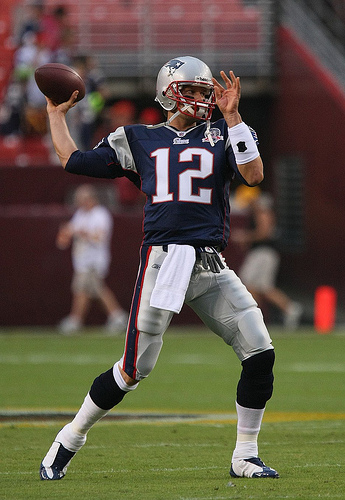 This is a guest blog post by Dave Clarke, an award-winning editor and editorial director in the marketing departments of Fortune 500 companies, such as Oracle and Symantec. He is currently editorial director for Hologram Publishing, a provider of custom content for companies, large and small.

In about a week, Super Bowl XLVI will kick off, and an audience estimated to exceed 110 million people will watch the game on their televisions. Roughly half of them will root for the New York Giants and half for New England’s Patriots. Advertisers will spend about $3.5 million to try to reach them all for just 30 seconds. That’s more than $116,000 per second. As Shakespeare wrote, “Lord, what fools these multinationals be.” (Or something like that anyway).

With 100 million-plus people lined up at once and virtually all of them carrying their mobile phones, Super Bowl XLVI is the perfect time for marketers—especially small and mid-size local businesses—to piggyback on the investment the major players have made and deploy their own game-winning, inbound marketing mobile strategies for a fraction of what the multinationals are shelling out.

In their new book, Go Mobile, released just in time for the Super Bowl (Coincidence or clever marketing? You decide.), co-authors Jeanne Hopkins and Jamie Turner lay out the fundamental concepts marketers need to leverage this growing marketing channel. Using Go Mobile as your guide, here are seven ways you can score big with your customers before, during, and after the big game.

Whether you’re a local pizzeria or a hair salon, produce a series of QR codes visitors to your shop and website can scan with their mobile phones in the lead-up to game day. It’s easy to get a QR code produced; just visit Kaywa, QR Stuff, or QuikQR (to name a few), and produce one for Giants fans, and one for Patriots fans. When customers scan the code, whether they’re in-store or visiting your website, direct them to a landing page where you gather a scant few details like name, email, and maybe phone number. From there, offer a discount on a game-time special. For instance, a New York-style pizza or a bowl of New England clam chowder; or, a Jersey Shore hairstyle or a stylish Cambridge classic cut. Enter everyone into a drawing for a free dinner, free pizza, or free whatever-you-sell. Don’t forget to promote the QR codes in-store, online, and send out some press releases to local media touting your creative mobile campaign.

Geosocial services such as Foursquare, Gowalla, SCVNGR, AOK, and others allow businesses to claim their web pages on the sites and then create promotions by having users “check in” to the site when they arrive or accomplish a task, and then send messages to those in their social network about the venue or activity. If you’re a bar, or a restaurant with a bar, create a promotion that has people reporting quarter-by-quarter on who the crowd is rooting for. Give an award at the end of the game for MVP—Most Valuable Patron—based on the quality of their reporting.

Short-messaging services (SMS, also known as text messaging) are far and away the most widely used mobile phone feature and the most widely used mobile marketing tool. Every mobile phone—whether a web-enabled smartphone or not—can send and receive texts. Set up a special mobile number to receive texts, then text your opted-in subscribers to text you their predictions for the score, quarter by quarter. Text the winners to everyone after each quarter (e.g., “Bob S. of Bronx, NY” or “Betty F. of Boston, MA”) and announce what they’ve won.

Many of your opt-in email subscribers may be traveling during the game—waiting in airport lounges, riding the rails, or traveling by taxi—with a bit more time to read emails sent to their mobile phone. Send these folks a mobile-optimized email that leverages their interest in the game. Produce a game-time-sensitive promotional incentive to explore your mobile website, download your app, read and subscribe to your blog or Twitter feed, or Like you on Facebook by tying the content and conversations you publish there to the types of things football fans are interested in.

For example, invite college alumni of Super Bowl players’ college teams to weigh in on Facebook about their fellow alumnus; tweet about game-changing plays (interceptions, fumbles, missed field goals, etc.) and tie it to your game-changing products or services; or create a LinkedIn group just for people who are on the move during the game and have them share their travel tales.

If you’ve already developed a website optimized for mobile devices, now’s the time to make the most of it. Consider a game-time promotion that drives visitors to your website. Using your inbound marketing platform to quickly and easily temporarily modify your website for the game, place short questions on your web pages that lead to landing pages where people give you a bit of information and make their picks for things like: Who will throw for the most yardage, Manning or Brady? Which team will be penalized the most yards? How many yards will the longest field goal be? Give everyone who responds some minimal reward—virtual or real—and announce prize winners at the end of the game.

If you’ve already developed an app for your business (if you haven’t, watch the RaizLabs portion of the Mobile Marketing Workshop to learn how to plan the development of mobile apps), leverage your investment by getting people to download and use it during the game. This will take some promotion ahead of time on your part, both in-store and online, using all your inbound marketing muscles, but it’s a great opportunity to engage users and prospects with one of your best brand-building tools.

Start by giving everyone who downloads your app on Game Day some kind of perk; give a slightly better perk to existing users who log in and use the app during the game. Then, create a four- or five-part app challenge, one for each quarter, and one for halftime. Keep the challenges short so as not to distract too much from the main event, but use the opportunity to get users familiar with various elements of your app, quarter by quarter. Announce the winner after the dust has settled on the closing ceremonies, and don’t forget to send a text or email to everyone who participated the next day.

This is the place to really get the conversation going between you and your fans and followers. Music icon (and marketer extraordinaire in her own right) Madonna is slated to perform at the big Halftime Show. Use Facebook and Twitter to let people know you want them to rate Madonna’s performance 1-10, 10 being best, by texting their rating to a mobile number you set up in advance. Tally the votes, average the results, and post Madonna’s score on Twitter and Facebook. Then let everyone chime in with their opinions on the rating on both social media networks.

With the multi-nationals paving the way for you with their mega-sized marketing budgets and a mobile phone in every football fan's hand, game time is the perfect time for small- and medium-sized businesses to connect with their customers in a very personal, local, and interactive way. The more you can personalize and localize the experience, the stronger the connection you’ll make with your mobile users.

Do you plan on running a Super Bowl-themed campaign or promotion this year? If so, will it be a mobile campaign? Share your plans in the comments!