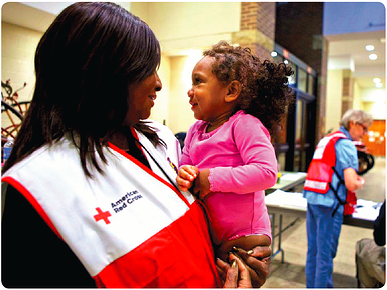 The holiday season is here. Sipping on eggnog, baking chocolate chip cookies, popping champagne with family and friends -- these are some of the most enjoyable parts of the season. But while we enjoy these little pleasures, it’s important to remember that there are still many people recovering from the devastation of recent natural disasters, like Hurricane Sandy. Does that mean we shouldn’t sip eggnog, bake cookies, or pop champagne? Of course not! But perhaps we should give a little bit back, and share our holiday spirit.

Over the past six years at HubSpot, we’ve been humbled to grow an incredible network of inbound marketers. So now we’d like to call on you, the inbound marketers across the globe, to rally together and do something that truly means something. We invite you to join us, and donate what you can to the American Red Cross to help those affected by natural disasters. The Red Cross has done a stellar job collecting donations through its "Give Something That Means Something" campaign. Read on to learn more about this campaign, and how the Red Cross has had success leveraging inbound marketing to drive donations. You can also download the PDF version of this case study here, no form submission required.

The American Red Cross' "Give Something That Means Something" Holiday Campaign

The Red Cross piloted a campaign called “Give Something That Means Something.” Instead of asking people to donate an arbitrary amount of money, the Red Cross wanted to make every donation meaningful. In other words, it’s not about the money someone gives, it’s about what that money symbolizes -- blankets, shelter, vaccinations, etc. In this way, donors aren't just giving away their money; they're also getting the satisfaction that they truly are giving something that has meaning.

For example, you could give the gift of emergency shelter. Every $50 donated toward emergency shelter helps provide shelter for one person. Every $50 increment from there helps give an additional person shelter. That’s a message that particularly resonates with us. We believe marketers should be creating value -- marketers should be remarkable. Donating a symbolic gift to help those in need seems truly remarkable to us. That's why we wanted to highlight the American Red Cross as an inbound marketing case study. Let's check out why its holiday campaign has been effective.

How the American Red Cross Is Using Inbound Marketing

The American Red Cross is employing three top-of-the-funnel inbound marketing techniques to drive awareness for their campaign and help inspire people to donate.

As every great inbound marketer knows, creating content is key to online marketing success. The Red Cross' digital holiday catalog is an inspiring, well-designed, and informational piece of content aimed to drive donations during this holiday season. The catalog provides a full explanation about what the "Give Something That Means Something" campaign is all about, and includes a fundamental component of effective marketing content: education. While the goal of the offer is to get people to donate and help with disaster relief, like a good marketer, the Red Cross understands that the way to motivate people to act on their calls-to-action is to provide value. Not only does the catalog detail the various types of donations they can make, but it also provides information about how people can prepare for emergencies. The Red Cross uses this as a way to educate donors about how the money they donate can then be used to help others who need those same necessities. The catalog includes multiple calls-to-action to donate through similar methods like this. It also allows donors to send free holiday greeting cards to announce their gifts, or send Red Cross eCards. 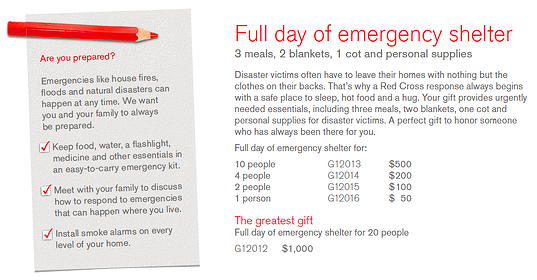 While the Red Cross is taking advantage of various social media platforms, its giving campaign is seeing particular success on Twitter via the hashtag #RedCrossThanks. As shown in the graph below, once the hashtag was launched in late November, it attracted many tweets. In total last month, #RedCrossThanks was tweeted a little over 1,000 times. In fact, according to hashtracking.com, two of the tweets sent between December 3 and 4 reached 220 followers. Imagine how many people were reached with all 1,000 tweets! 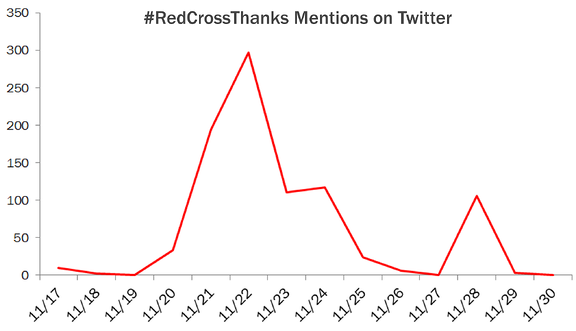 These #RedCrossThanks tweets are being sent and used in various forms. Some come from volunteers who have assisted with Hurricane Sandy relief, while others come from people who have benefited from the assistance provided. Here are a couple of examples:

#redcrossthanks to the thousands who have responded to #hurricanesandy - couldn't have been done without all y'all twitter.com/TanyaMGulliver…

#Sandy is our largest U.S. relief effort in more than 5 years. We have served over 7.6 million meals & snacks. #RedCrossThanks

By implementing a promoting a hashtag, the Red Cross gives spreads the Red Cross name -- associated with positive messaging -- to Twitter users, keeping the thought of donating on top of people's minds this holiday season.

In addition to the #RedCrossThanks hashtag, the Red Cross put together a creative and inspiring animated video. This was posted on Vimeo, highlighting and describing the entire “Give Something That Means Something” campaign.

As highlighted in a New York Times article (which highlights the success of this particular video marketing effort), the video attempts to steer people's holiday focus away from giving friends and family material gifts, and instead motivates viewers to give people something that, well, ... means something! It calls on people to question their shopping habits, and rather think about the importance of making their holiday spending truly meaningful. This video is so effective because it not only speaks to the viewers on an emotional level, but it also includes several calls-to-action to get them to donate to the Red Cross. Check it out below.

As illustrated, the Red Cross has been making fantastic use of online marketing platforms and inbound marketing strategies to help people in need. To assist the Red Cross with its goal of making the world better through meaningful donations, help us gather donations for those in need this holiday season. Follow the Red Cross, and share a call-to-action to donate via #RedCrossThanks. Create value. Do good. Be remarkable. It’s the inbound way.