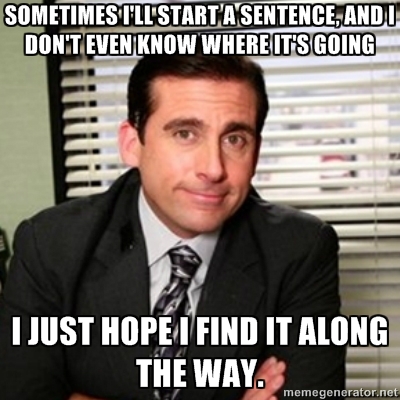 Question. Does your marketing sound like it was created by Eeyore? Bill Lumbergh? Michael Scott?

Earlier this week, I was on a panel for Boston HubSpot users centered around the theme of creating lovable marketing. One of the themes that came up during the Q&A portion centered on how to separate "business" from "personal" in your marketing. I mean, when you have lots of different voices contributing content, and the lines between personal and professional social media usage is already pretty blurry, it's a legitimate concern -- particularly for B2B marketers or those working in industries that have a harder time tying in fun, friendly, silly sentiments in their marketing.

But you know what I think? I think the lines can be blurrier between personal and professional. Why? Because I think it helps brands to sound like freaking human beings once in a while. I've said it before, and I'll say it again. People buy from people they like and trust. And it's really hard to like a faceless, personality-less (so not a word, but work with me here) business.

I mean, who has ever fallen in love with a company whose blog posts are full of jargon and business babble? Or that has social media updates with all the passion of a piece of dry toast?

So to inspire you to inject a little oomph, a little personality, a little love into your marketing, here are some businesses that have totally gotten over the fact that they're in industries with marketing that's typically stiff and passionless, and have decided to instead act like, well, human beings. Take a look.

Intercom is a CRM tool for web-based businesses. Yawn? Perhaps. Until you read their content. If you visit their blog, you'll find insightful articles that are -- gasp -- really easy and entertaining to get through! Take their most recent article, "If It's Important, Don't Hack It." This is a snippet that's found in between two graphs ... two graphs that would make most people start to yawn and trail off:

Look, even if you're really into the topic of growth hacking, it has the propensity to be really dull. That's why it's genius that Intercom has decided to use colloquial language, like "gonna," and even "pisses off" in their copy. Because it's how most people actually talk. You know, like humans! So if you think you need to sound all businessy and professional when talking about industry concepts, throw that notion right out the door. The most helpful content is the stuff that's easy and natural to get through, written in a tone that aligns with the way people really speak.

General Electric. Not the hottest of the hot. Until you check out their Pinterest presence (yes! they are on Pinterest!) and realize they don't take themselves insanely seriously. For instance, they have boards called "Mind = Blown" and "Badass Machines" right alongside boards like "Eco Efficient" and "The Art of Innovation."

But really, the crowning achievement of GE's Pinterest presence is their ability to find a way to incorporate the Ryan Gosling "Hey, girl" meme into their marketing. Only instead of Ryan Gosling, it's Thomas Edison. Ladies, you're welcome. 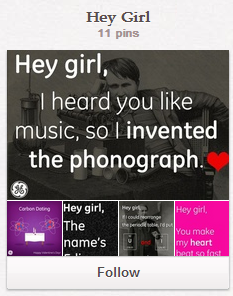 Dropbox, a cloud file storage and sharing product (snoooore) recognizes how potentially snoozeworthy their business could be, and tempers it with some marketing that appeals to people's more human sensibilities. I think they do it best in their emails, which combine lovable design and personable, easily consumable copy. 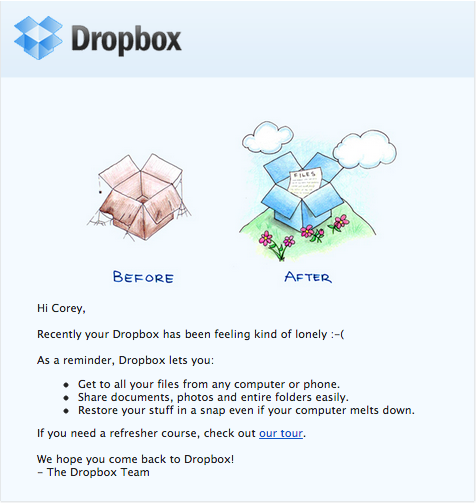 See? Why does cloud storage have to be lame and boring, full of jargon no average consumer would understand? This email ... makes sense. It has cute images that make your Dropbox look sad for being unused. And it has an emoticon. :-)

Inbound marketing agency IMPACT doesn't have their panties in a bunch over sounding like stuffy marketing professionals -- they embrace a sense of humor in their marketing content, even though they're speaking business to business. And they're not just limiting their personality to "fun" social networks, like Facebook and Pinterest; they're even sharing this type of content on places like LinkedIn. Take a look at two recent pieces of content they shared on LinkedIn, for instance: 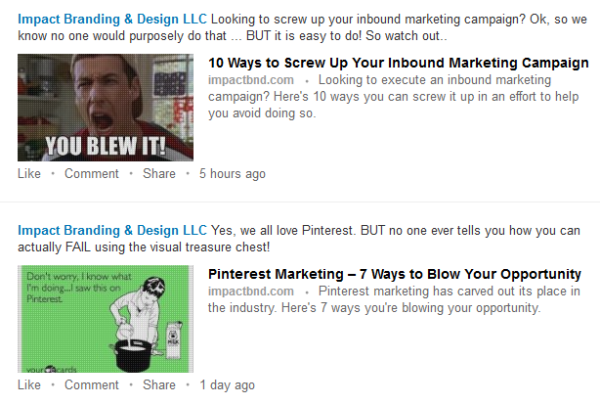 Not only are the images chock full of fun and personality, their copy is casual and natural, too.

I also love a business that isn't afraid to put their employees front and center. Check out how they highlighted the ladies of IMPACT over Valentine's Day. That's right. They're not afraid to get a little adorable! 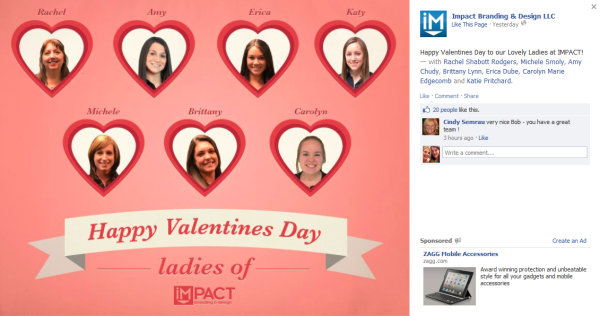 I asked IMPACT's director of marketing, John Bonini, why he uses a lighter, more personal tone in his marketing content. Here's what he had to say:

"For me, it's always boiled down to my personal marketing golden rule; market as you would like to be marketed to. I don't respond to vanilla marketing messages. At all. However, a witty subject line or an entertaining twist on a relevant subject will always carve out a spot in my day. Consequently, I market with this in mind every day ... I'm always conscious of a prospect's attention span. I've always wanted our prospects to feel as if they already know us by the time they get on the phone with Sales."

GoToMeeting, run by Citrix, does a great job achieving a professional yet friendly tone in their content, with a customer-centric approach. I think their Twitter stream is one of the best instances of this balance. Take a look at some of their most recent tweets, with notable ones called out in orange. 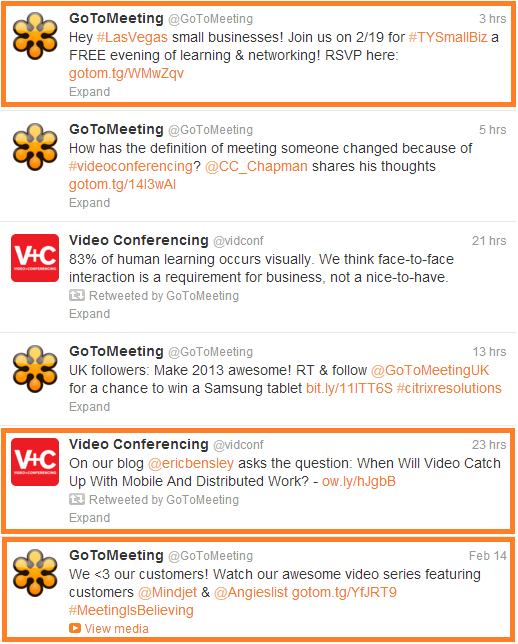 It's refreshing to see a B2B brand that isn't afraid to get a little, well, lovey-dovey in their marketing communications. GoToMeeting is also very focused on promoting their customers, showing a more relatable side to leads that might be in similar situations as some of the customers they're featuring.

If you told someone you worked in insurance at, say, a party, you might not get the same reaction as if you told them you worked at Disney World.

Hey, nothing against insurance, but it's not the easiest thing to sex up!

That's why I think it's awesome that Geico and Allstate have both found ways to lighten up the discussion around insurance -- Geico with its long-running mascot, the Geico Gecko (alongside other mascots like the Caveman), and Allstate with its newer character, Mayhem.

Most recently, the Geico Gecko has been featured in a blooper commercial, showing his "behind the scenes" footage from shooting commercials. And the Mayhem character? Well, he's been featured doing everything from running into the road like a deer in headlights, to jogging around the burbs with pink hand weights, to my personal favorite -- streaking across a football field:

See? "Boring" industries don't have to be boring, at all ... just remember your audience is human and likes a little levity once in a while! Regardless of your product or service.

One of the best parts of this video to me is the contrast in communications the customer, Jessie, sees from one provider, versus the Zendesk-powered provider. When she sees the warm message "Hey there, Jessie" come through on live chat from one customer service rep, as opposed to the cold and impersonal "Dear Sir or Madam," she chooses to talk to the more personable rep. If you watch the video all the way to the end, you'll see Zendesk takes the whole genuine human interaction to a hilarious extreme, in which Jessie and her support rep start tweeting, talking on the phone, and then eventually presumably embark upon quite the romance. The video ends saying, "Have a better relationship with your customers." Zendesk has decided to make acting like good, cool, friendly people central to their entire brand strategy.

What other businsesses are doing a great job at humanizing their brand through their marketing?