10 Qualities That Can Make Your Video Go Viral 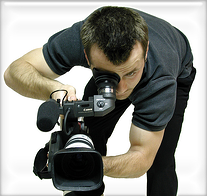 Inspired by a new "viral video" that I have been working on (to be launched next week!), here is a list of 10 video qualities that encourage others to share video content throughout blogs and social media sites.

It's not a specific equation to creating viral content; it's more like a game of bingo. The more of the below qualities you have, the higher the chances that your video will win ...  and "go viral."

2) Incorporate music. Elements that stimulate other senses (short of smell or taste) make your video much more engaging and entertaining. Hint: Create your own music or use music under a Creative Commons license. It would be a bummer if YouTube removed sound due to a record company's copyright.

3) Make your video very short. My favorite piece of advice regarding content creation is " murder your darlings. " You actually add more value if you make your content easy to consume! No matter how much awesome footage you may have, cut it down to the absolute minimum. Most people only have a few minutes or LESS to watch a video.

4) If you use music, keep it uptempo. Though deviations to this tip exist, using upbeat music as a background or focus tends to grab the viewer's attention and raise the excitement. In my experience, faster music has performed much better than slow .

5) Edit your video into sharp, quick scenes. Every second of your video is a game to keep the viewer's attention. If you spend 15 or more seconds on one scene, your audience may get bored and close out. Edit your video to have quick scenes (perhaps 3-10 seconds each) that stir curiosity and increase the likelihood that the video will be watched all the way through.

6) Be funny to people other than you. Avoid "inside baseball" when trying to be funny in your videos. You may think you are creating humorous content, but would outsiders appreciate it? Is it an inside company joke that others might not understand? Test your video on a few people outside your company before publishing!

7) Don't get stuck on quality. Awesome video doesn't need to be recorded on an expensive camera, in HD, or edited by a film editing pro. The value comes in the creativity of your ideas, not in the gloss.

8) Be bigger than life. People love watching crazy things that they would never see in everyday life. Take risks and capture something remarkable on camera. Act silly, create ridiculous office scenes, or do amazing (but safe!) stunts. This is the same type of creativity that brought SNL to the top!

9) Shock your viewer in first 5 seconds. The first 5 seconds of your video determine whether the person will keep watching or not. Don't make the mistake of having a long intro in order to "set the stage." Jump right in and grab their attention before the viewers move on to something else.

10) Remove as much "corporate friction" as possible. This is a tough one for companies that create content as part of a marketing program. (Like us!) If you throw your logo everywhere and have a sales-related call-to-action, people will consider it a commercial and won't want to pass it along. Our best advice is to find a balance that is subtle and creative. Can you ask your audience to do something that indirectly relates to your company?

What other qualities make a video viral? What are some of your favorite viral videos?