Is The Google Sandbox Keeping Your Site From Ranking? [cartoon] 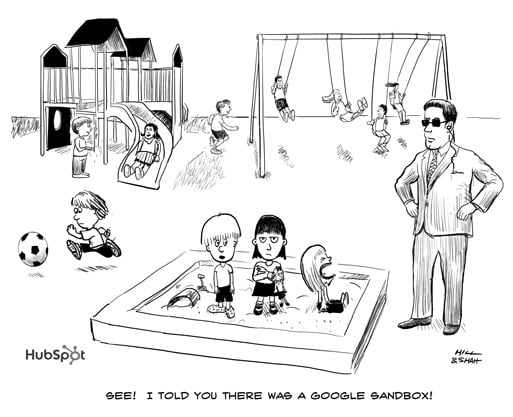 "According to the sandbox effect, Google temporarily reduces the pagerank of new domains, placing them into what is referred to as its sandbox, in an effort to counter the ways that SEOs attempt to manipulate Google's page ranking by creating lots of inboundlinks to a new web site from other web sites that they own." [full article]

Or, in other words, if you've got a new domain that Google doesn't trust yet, you can be put in the sandbox and it's going to be near impossible for you to rank for any competitive terms until Google trusts you enough to take you out of the sandbox.

So, does the Google Sandbox exist, or is it a myth?  I wasn't sure, so I asked the smartest SEO ninjas I know (and one of the smartest SEO people anywhere ), Rand Fiskin, from SEOmoz.  Here's what he had to say:

"Google's sandbox is neither mythical nor cartoonish. It's spelled traffic doom for thousands of sites. Although the causes of this frustrating filter (and the solution) are still unknown, webmasters should be paying attention to potential signs of danger. If pages on your site can't rank for obviously navigational queries (particularly those that include your brand name), you might want to look for solutions to Google penalties .

So there you have it.

How about you?  Do you feel like you've had a site stuck in the Google Sandbox and are not allowed to play with the other children?  Leave us a comment with your sandbox and ranking woes.