That has finally changed!

This past Friday Twitter API Announcements released information that it was working on a beta project to start ranking "the most popular tweets for a query, rather than only the most recent tweets"!  What this means is that Twitter search is starting to function more like a real search engine where authority (popularity) of a tweet is as important as recency!

Here's an example to drill my point home.  Earlier this year Sun CEO, Jonanthan Schwartz (@OpenJonathan) created a lot of buzz by using a #haiku to announce his resignation on Twitter.

For someone searching for relevant or buzzworthy information on Jonathan Schwartz in general you'll probably get his most recent tweets or @replies to him.  However, if you did a specific search for his resignation tweet using multiple search queries you get nothing!  Nada!

A similar search query on Google, on the other hand, yields the results below, answering my question what about Jonathan Schwartz has been most relevent or popular on Twitter, up to this minute or at any time. 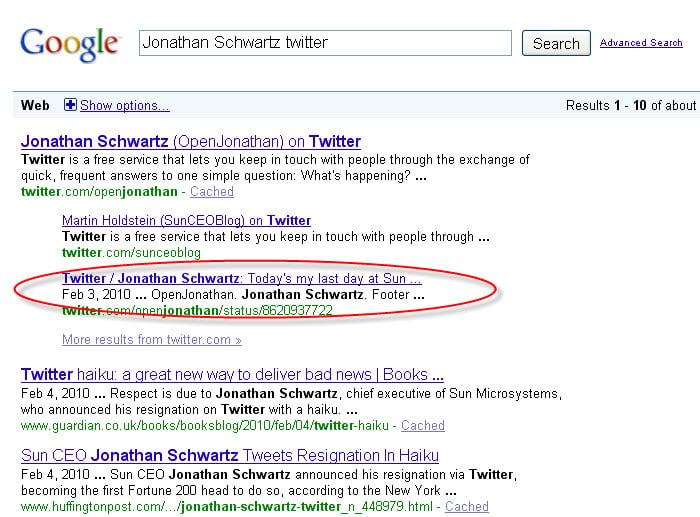 Twitter has yet to divulge details of what is considered a popular tweet.  It might be number of retweets, it could be inbound links to a tweet from powerful blogs, it could be a combination of such things.  The key thing to note is this is a huge step towards making social search work better!

People are spending 7 hours a month on Facebook, and generating upwards of 600 tweets per second on Twitter .  In fact, Facebook has dethroned Yahoo! as the second largest site and overtaken Google in traffic growth.  Businesses must social-media-optimize themselves to be found in these social networks for relevant keywords.

In Twitter search's current incarnation, all of the karma companies have acquired for creating buzz worthy tweets are lost.  However, with this small tweak in their API, we are a step closer to being social media optimized and found online for past efforts.

How are you social media optimizing your business?