All Killer, No Filler: 5 Things to Remember when Making Lists and Workflows

Lists and Workflows: they’re fundamental tools of the HubSpot platform. Whether you’re trying to enroll people into drip campaigns, segment data in your customer base or even just get a better idea of who you have in your contacts database, Lists and Workflows are a crucial asset to you and your various marketing endeavors.

Sometimes using Lists and Workflows can be difficult. They’re basically BFFs, but they present themselves as little logic puzzles similar to a Sudoku grid, where the deeper you get into it the more confusing it becomes. That, and the fact that you can only spend so much time trying to map it all out before your eyes start to blur. The trick is in figuring out how to design the Lists and Workflows order to accomplish the exact task you’re looking to accomplish, while also providing flexibility for the future.

So what do we do? We simplify.

In this post, we’re going to look at 5 steps to keep in mind when approaching Lists and Workflows. They’re already pals, and together they can be your best friends in the whole world; let’s break them down and see exactly how.

Approach it From the Thirty-Five Thousand Foot View

When you’re making Lists and Workflows, the first question you always have to ask upfront is: why? What’s the endgame? Who are you trying to pull into the List, and what are we going to do with them in the Workflow? Perhaps you’re trying to design an email campaign, but while your emails could be written with the wit of Oscar Wilde there’s no point to all that the effort if we don’t know who it’s going to.

Start with a variation of the following sentence: “I want to do _______ (using a Workflow), and it needs to go to/be seen by people who are _________ (using a List).” Following that formula, simply approach your overall problem slowly and calmly, and most importantly: don’t let it see you sweat.

One thing that tends to happen is that even when we know where we want to end up, we have trouble getting there. This isn’t Oz; there isn’t just one road to walk down, and there isn’t necessarily just one simple solution for everything. When you’re making your Lists and Workflows, you can’t resort to one specific criterion or action each time. Remember: the goal here is to keep things simple and clean.

When making Lists, there’s always at least one thing that should pull contacts together. Think about it in terms of the 1971 jingle “I’d Like to Buy the World a Coke” (that may or may not have been written by Don Draper; your interpretation of the end of Mad Men is your own): you could make a List of the world in order to buy them a drink, but it’d help if you knew specifics about the contact so you could buy them a Coke. There should always be at least one shared criteria that applies to your target contacts (such as Coke in this example); figure that out, and everything from there is easy.

The same goes for your Workflow. If you’re trying to do something that involves 5 If/Then branches with separate follow-up criteria, you’ll find that the more you add the more you have to compensate for along the way with the new branches you’ve added. Sometimes the safest road isn’t writing one intense Workflow, but 5 shorter ones that accomplish the same thing; avoid missing steps by separating them piece by piece because, as any accomplished Lego builder can tell you, mashing things all together only makes it harder to pull them apart if something goes wrong.

There’s an old saying that I grew up with: “To infinity, and beyond!” It’s a decent mantra when you’re exploring the galaxy, but it’s less fun in Workflows. If you’re going to add in complex If/Then branching logic but want to make sure people hit specific actions regardless of what If/Then action they initially move down, don’t forget that you’ll need to recreate your branching logic ad infinitum to ensure that they hit every action you’d originally intended. If you don’t, your contacts will be left behind. 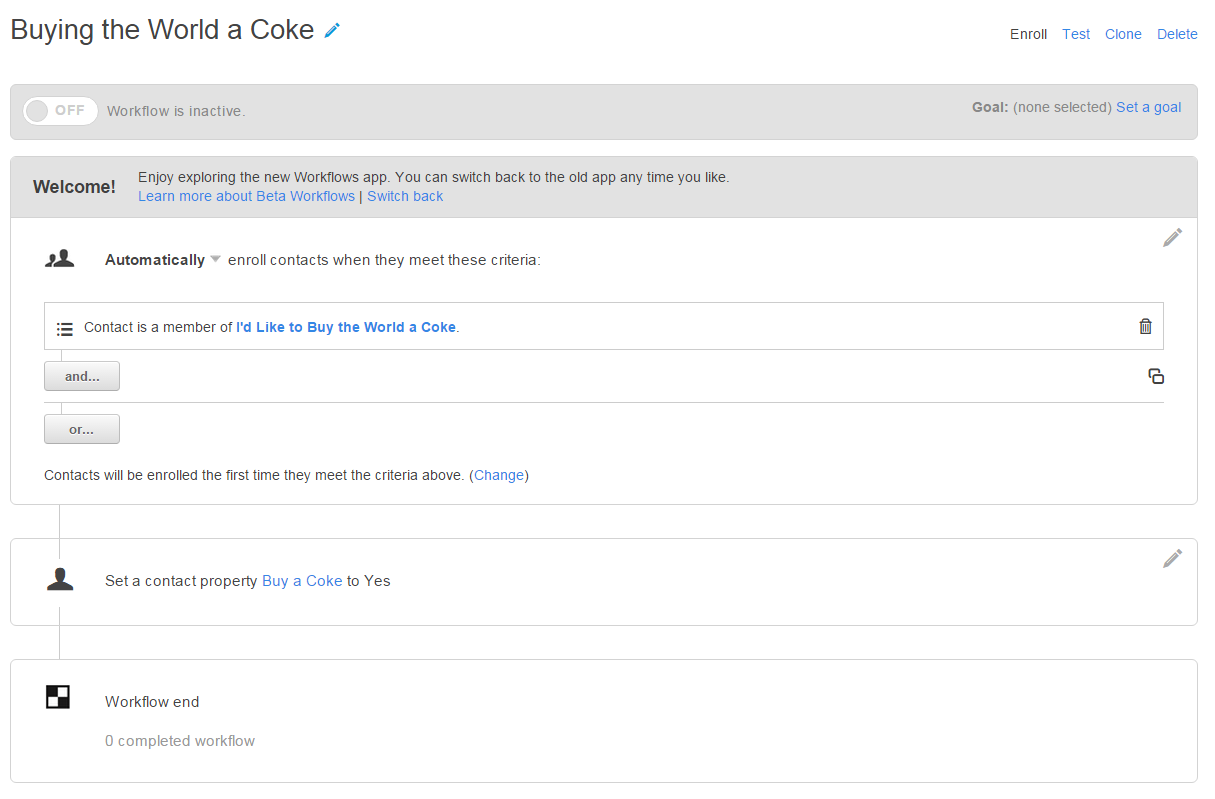 I believe it was Shakespeare that said, "Together forever and never to part/Together forever we two/ And don't you know I would move Heaven and Earth/To be together forever with you." That’s pretty applicable to the List and Workflow dynamic; like Batman and Robin or peanut butter and jelly, both are okay apart but better together. So, when you figure out what you want to happen and who you want it to happen to, create them in concert.

Think about it like conducting a duet. The List is the first voice, the bass voice, the foundation that essentially meets your overall needs first and foremost with little care for its own. The second voice is the Workflow, which is still trying to accomplish the overall task for you but at its own pace with its inherent machinations; when you turn it on it becomes wild and free, and leads the way. Together, if played right, the two come together in harmony to make the music you’re looking to hear.

Something to keep in mind when using a Workflow is speed. You don’t want to rush through it too fast, but rather keep things at an even pace for a satisfactory end result. When not utilizing delays, you may find that the Workflow is over before it even began, and it limits our ability to use Workflows for nurturing purposes. A well-placed delay or two can help your Workflows fire better, and even nurture your contacts stronger.

Grab a Cup of Coffee and Spotcheck

Before you turn everything on, take a break. This is maybe the most important element to a strong design between List and Workflows; the more you stare at a computer screen and the more your eyes glaze over, the less effective you’ll be when it comes to actually turn everything on and making sure it does what you want it to do. So stand up, grab a cup of coffee, maybe watch an episode of your favorite show on Netflix and come back to it with clear eyes and full hearts, because then you can’t lose.

One you’ve refreshed, then spotcheck your Lists and Workflows every which way from Sunday. Test functionality are inherent to both Lists and Workflows, but make sure you have a contact that you expect to see in both the List and the Workflow. Having that initial contact you can use to test everything allows you to troubleshoot potential issues before they happen -- Who is appearing? And more importantly, who isn’t? You should know by now exactly who you want your actions to target, so make sure they do.

Sometimes it’s easier to find the customers you are interested in if at first you see the ones I’m not interested in. You can accomplish this a number of ways, but one easy way to do this is to first create a list designed specifically to pull in excess contacts. From there, you can create a second list that will pull in the ones you’re looking for simply by designing your new List around people who are not members of the first list.

Put On Your Customer’s Shoes

We’ve all been marketed to in some form or another, and we all know what it’s like when we’re being marketed to poorly. Take that to heart: how would you want to be nurtured? Keeping this in mind can help you take your Lists and Workflows to the next level, as you start considering what the customer would experience and how they might interact with you from there; it’s in our power to cater to their wants based on the information they’ve provided to you, and with a sleek List and a sharp Workflow we have the ability to create content tailored to a positive customer experience.

In the end that’s what all of this is about. Lists can make solving for your customers needs an easy task within the HubSpot platform, and Workflows can make it easy for you to do many things at once by just setting up a few simple initial steps. I’ve said it before but it bears repeating: Lists and Workflows aren’t overly complex, but everyone knows that the harder you try to solve a riddle the less easy the solution seems; a forest is just a set of trees, after all. Just remember to take things step by step, and you’ll be good to go.