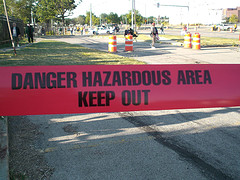 It's something we hear all the time at HubSpot -- the old canard that says "my industry doesn't..."

Some interesting arguments lie behind these assertions. Let's look at three of the biggest, hairiest ones.

My industry is too regulated - we can't be too careful online

We've heard this from lawyers, financial advisors, and healthcare providers, just to name a few. And in almost every case, we've been able to find a way to get them blogging, set them up with an active home base on Facebook, and helped them build a respectable Twitter following.

Usually, it requires rethinking what you think blogging and social media is all about. When somebody says "I have to be careful about what I say online," that usually means just that -- there are legal restrictions on their industry that keeps them from offering advice, or endorsing a certain action or methodology, or even giving the appearance of doing so, online.

I totally get that. But the thing is, that's not the only thing you can do online.

In fact, I'd argue that it's probably the last thing you want to do online. Seriously, who needs more advice?

But what you can do is talk about what you know. Point to breaking news within your industry, and say something interesting about it. Explain commonly confused terms, jargon, or concepts that your customers frequently stumble over.

Believe it or not, there is a difference between being helpful and offering advice. If you look for it, you can find that line.

My company doesn't want to lose control of our brand

This one makes about as much sense to me as somebody saying that they only want people to say nice things about them, so they don't go to any of the same parties their friends go to.

All that does is ensure that you won't hear what they're saying, full stop. Good, bad, or indifferent, you'll never know.

Your absence on Twitter or Facebook is not stopping people from talking about you -- or the business you're in -- and saying what they feel. What it is stopping you from doing is having a voice in the conversation, from speaking for yourself and in your own way. Even worse, you're squandering the opportunity to learn how the new media works, and to train your staff in the proper use of it.

I don't hear this one as much as I used to, since it's been pretty well debunked by now -- for any given age group or demographic, you'll find an active, vocal slice of them online. Even B2B bloggers, long considered to have it particularly tough, have found that blogs and social media works for finding prospects and leads.

What's true is that it might take some extra work to locate and identify your ideal customers online. People cluster themselves online differently than the way they cluster in other settings, so you might have to learn new ways of finding and reaching them. But you can't do that if you're not there.

Want to learn more about how real people in your industry are using blogs, social media, landing pages, email marketing, and more? Check out HubSpot Examples and search by industry.