How to Design Your Sales Process in HubSpot CRM

Need to get HubSpot's CRM? Click below to get it for free. 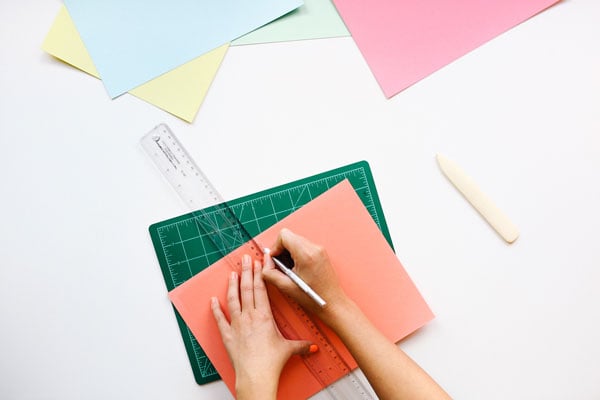 I've been helping people use the HubSpot CRM for a while now. As it turns out, sixty percent (yes, 60%) of HubSpot CRM users haven't used a CRM before. In speaking with these users, I've found that the deals feature challenges them the most. If you’ve struggled with using deals yourself, this blog post is for you!

Deals are used to track your sales. They are organized into columns that represent the different stages of your sales process. You can drag and drop individual deals as your sales progress.

The CRM comes with some default deal stages already set up. You're certainly encouraged to customize the deal stages to represent your own sales process. If you don't know how to express your salesprocess as a series of columns, don't worry — the remainder of this post is all about figuring that out.

The first step in defining your sales process is understanding the buyer's journey. To be brief, the buyer's journey is the active research process a potential buyer goes through leading up to a purchase. Your job as a salesperson is to help the buyer through this journey.

Once you know the journey that your buyer goes through, you can design a sales process to help them navigate that journey. You probably have some sense of this already, but formalizing it can take some work. Here's one way to do it.

Think for a minute about everything that has to happen in order for an interested stranger to become a customer. Write the important touch-points in chronological order. Lay it out like a timeline and organize it into two rows: one for the actions YOU take and one for the actions the BUYER takes.

When you're done, you should have every possible step either of you will ever have to take, including all the obnoxious stuff like trying to find a time to meet. It might look something like this:

Which of these steps included above have to be taken every single time? Which steps would you never, ever skip, even if you could?

The first three steps are identify the prospect, connect with the prospect, and find time to meet. These probably feel unavoidable, but would you ever miss them if you could find a way to skip these steps?

The best part of selling is when you get to meet with a prospect and start talking to them. If there was a way for your calendar to be automatically filled with appointments to demo your product to interested people, wouldn’t that make your life a lot easier?

If you answered "yes" to this question, go ahead and cross these steps off. Even though these steps usually get taken, nothing would be lost if you could somehow skip them.

Moving on down the timeline, the next step is a meeting between you and the buyer. You’re demoing the product, and they’re evaluating it. Chances are, this is a necessary step. You want to make sure the person is a good fit for your solution and that you can actually solve the problems they have. Skipping this step could lead to miscommunication and dissatisfaction down the road. Since this is an important step for both you and the buyer, we’ll leave it here.

Next is following up. Chances are, you spend a lot of time following up with people, but wouldn’t it be nice if you didn’t have to? If buyers just took action right away, wouldn’t your sales process be simpler and more enjoyable for you? Since following up is a chore that you’d probably be happy to get free from, we’ll cross it out both times it appears in the process.

Next, you schedule time to negotiate with decision maker. Once again, scheduling is an administrative task that you’d probably be happy to avoid. Furthermore, if the person you initially met with is the sole decision maker, this is something you could take care of in the first meeting, so we’ll also remove this step from the process.

In the next step, you educate the decision maker and they evaluate. Depending on your sales process, this step might be unavoidable, even if the person you met with initially is the sole decision maker. This might be where you negotiate price, figure out contract terms, and take care of other important business that it was too early to discuss in your initial call. If that’s the case, this is another step that you don’t want to skip, so we’ll keep it here.

Next, the decision maker approves the purchase. Without this approval, the sale can't move forward, so we’ll keep this step.

Then you send the contract and follow up when you do. This is another action that, if not taken, would halt the sale's progression, so this, too, we’ll have to keep.

Last, the buyer signs and returns the contract. This closes the deal, so it’s also necessary.

We’ve now whittled this process down to five key steps:

This is the essence of this sales process, but it'll need to be refined a bit more before it can be translated into deal stages.

Your deal stages should give a clear indication of how close a deal is to closing. When it comes time to forecast your monthly revenue, you want your deal stages to take away as much of the guesswork as possible. In order for this to work, every deal stage needs to have these three characteristics:

Let's use these three characteristics to re-examine each step of our sample sales process.

The first step is a meeting between the buyer and the seller to demo the product.

This is factual because a meeting requires real action from both the seller and the buyer. It’s also inspectable because there is likely some sort of evidence that it occurred, such as a calendar event, a web meeting recording, a phone call, or a follow-up email. To make this step buyer-centric, we'll call it "Evaluate Product" because that's what the buyer is doing.

The second meeting is factual and inspectable for the same reasons as the first meeting. We'll call this step "Decision Maker Evaluates" to make it buyer-centric.

The next step is for the decision maker to approve the purchase.

This may or may not be factual because the decision maker might not have to do anything more than shrug their shoulders and say, "Fine by me." It also isn't inspectable because, in many cases, you won’t know for sure if this has happened until the contract is returned. It isn't factual or inspectable, so we’ll remove it from this list.

The next step is sending the contracts, which is factual and inspectable, but it's a seller action rather than a buyer action. When you have a factual, inspectable step that is seller-centric, ask yourself what this looks like to the buyer. In this case, the buyer is receiving the contract, so "Contract Received" would be a buyer-centric rendering of this step. This is still factual because it requires the seller to send the contact, and it's inspectable if the contract was sent in a tracked email.

The final step is signing and returning the contract.

This is factual and inspectable, and it's a buyer action, so it's perfect as is.

The last thing you need to do is make sure none of these steps are redundant. In general, when it comes to creating deal stages, the old adage of "less is more" definitely applies. The more stages you have, the more complicated and confusing your process will become. One very simple way to remove extra deal stages is to keep an eye out for redundancy, so let's look through this sales process one more time and take out any duplicate stages.

Again, in this example we’re assuming that two meetings are necessary for the sales process, so we’ll leave both of those in place.

All three of these steps are required for every sale, they are factual and inspectable, they are buyer-centric, and they aren’t redundant. This is a good sales process.

Now let’s translate it into deal stages. The actions in your sales process are what signal that a deal has moved from one stage to the next, so the names of your deal stages will be past-tense version of these actions. As complicated as that might sound, it's as easy as this:

Once you've translated your sales process into deal stages like this, there are two additional stages you'll want to add: an "On Radar" stage and a "Closed Lost" stage. You can call these stages whatever you want, but here's what they mean:

With the addition of these two, we have five deal stages: On Radar, Product Evaluated, Evaluated by Decision Maker, Contract Signed and Returned, and Closed Lost. This is a solid deal pipeline.

In HubSpot CRM, each deal stage gets a name and a probability. The probability represents the likelihood of the deal closing by its projected close date and is used to generate the Deal Forecast on the Sales Dashboard. When you’re first creating your deal stages, these probabilities will often be based on your best guess, but as time goes on, you should refine them to generate more accurate forecasts.

Whenever you set a stage’s probability to 0%, the system counts it as Closed Lost. 100% is counted as Closed Won, meaning the person bought your product. In our sample sales process, Contract Signed and Returned represents the Closed Won condition. If you were creating deal stages for this process, you would set this stage's probability to 100%, and you would set Closed Lost's probability to 0%. The other steps would go somewhere in between. So we might set On Radar to 10%, Product Evaluated to 50%, and Evaluated by Decision Maker to 70%. These are arbitrary values, but as time goes on, you'll be able to adjust them to improve the quality of your Deal Forecast.

And now we have a 5-stage deal pipeline. When you create your own pipeline, make sure there is one factual and inspectable action that qualifies a deal to be in each stage. If you work with a team, make sure everyone is using the same actions to determine what stage a deal should be in. This way, your deal stages will consistently represent the actual progress of your deals, and you'll be well on your way to having a reliable forecast every month.