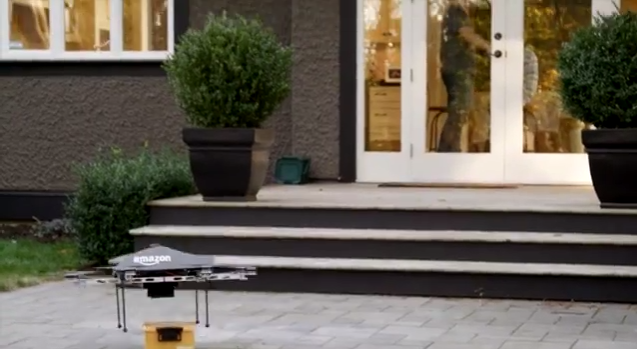 As I perused my Facebook and Twitter feeds this morning, a funny little item caught my eye: the Amazon delivery drone. Certain I was being punked by yet another clever article from The Onion, I clicked on over to get a few chuckles. To my complete and utter surprise, the piece on drones was reported by none other than the Huffington Post, complete with quotes from Amazon CEO Jeff Bezos as given in a 60 Minutes interview.

Although my colleague over on UATTR thinks the timing of this announcement is just a publicity stunt (which it is -- and it's been fantastically successful), and even given that Amazon admits the technology is probably half a decade away, there are some key lessons that ecommerce marketers can learn from the very fact that Amazon is working on something this crazy.

I can't emphasize enough how you should read "The Innovator's Dilemma" and the follow up article in HBR "Surviving Disruption". Disruptive innovation is when a new technology or business model -- such as ecommerce -- "disrupts" large, established companies -- such as physical retailers like Borders (which Amazon and other ecommerce retailers disrupted right into bankruptcy).

One of the scenarios that they talk about as an example of surviving disruptive innovation is if there would ever be a future where there are no physical retail locations and everything is done via ecommerce. It's hard to envision! Streets no longer lined with retailers and malls relegated to those arcades where parents drop kids off while they... well... without retailers I'm not exactly sure what the parents are doing at the mall.

One of the jargon terms they've coined is the "extendable core" -- that part of your business model that a company disrupting your business can't replicate without adopting the same rough business model and same accompanying cost structure. In the world of brick-and-mortar retail, where ecommerce merchants have taken a sizable chunk from retail sales, one of the key extendable cores has been the immediacy with which a consumer can get the item. Since the advantage of ecommerce retailers lies in their not having physical presences around the country to maintain where consumers could go and immediately purchase a product, this advantage was significant.

There are certain situations in which that's highly applicable. Sometimes you're buying something that you need right now. It might be groceries you forgot to get or supplies for a time-sensitive project or a last-minute gift you've forgotten to buy -- and it's something that ecommerce marketers haven't been able to replicate. Next-day delivery is often useful but not quite fast enough for some use cases.

While B&M retailers have other advantages currently out of ecommerce marketers' reach, such as the ability to physically interact with a product before buying it along with the experience of shopping, immediacy is a big hurdle that -- if successfully overcome -- would take another chunk out of the remaining defenses of the physical stores.

The fact that Amazon is thinking about this at all, much less actively developing solutions, shows that they're looking at what advantages that their competitors (such as B&M retailers) have and how they can continually disrupt them.

The Disruption of Inbound

For ecommerce companies looking to execute a little disruption of their own, inbound marketing offers a medium to disrupt even large retailers like Amazon. It's an extendable core that competitors can't replicate without adopting the effort (and inbound marketing can require a gargantuan effort) required to attain your knowledge and consumer mindshare through efforts like blogging. Although the barriers to entry for blogging may be very low now from a technical perspective, the successful ecommerce marketers are making targeted investments that are difficult to replicate.

One of my favorite ecommerce CEOs is Steve Sheinkopf of Yale Appliance. While some ecommerce CEOs express concern when their competitors suddenly launch a blog or other inbound marketing tactics, he shrugs it off. "If they can beat us then we simply weren't good enough" he says. "The tools are there but using them effectively to drive revenue is more complicated than just launching a blog."

I like to think of that as the ecommerce marketing equivalent of "Come at me, bro."

But he is right: Inbound marketing itself forms an extendable core that protects ecommerce companies from disruption while allowing them to disrupt long-tail retailers like Amazon because of the amount of effort and knowledge required to build inbound customer experiences from the first blog to the ongoing relationship in personalized emails that get smarter over time. Sheinkopf is a huge proponent of inbound because it simultaneously lowers the cost of customer acquisition while raising the customer lifetime value by increasing repeat purchases but lowering retention costs. It's incredibly powerful but it's not easy.

Solve for the Customer

Obviously, Amazon understands that online purchases come with a few drawbacks. Customers love the silent buying process, the convenience of shopping in their pajamas, and the joy of finding a new package in the mail (well, this customer likes that feeling—especially if the purchase was made so long ago that the package feels more like a gift than a delivery).

Still, even with the many benefits of shopping online, there was that wait between purchase and use. We’re a generation of instant gratification and procrastinators. When something is wanted or needed at the last minute, Amazon can’t help us. But, according to the article, in five years or so, they’ll be able to.

This is another great example of an ecommerce store identifying an unfulfilled need by their customer base and focusing on that. Amazon is by far not the most profitable ecommerce retailer -- even with the massive revenue they drive -- in part because they continue to invest so heavily in the customer experience. Amazon knows that they're not trying to drive transactions on their site, they're solving for the most important ecommerce marketing metric by trying to own your entire shopping experience.

We've written before about what separates ecommerce marketing into awesome methods and creepy methods.

Sites like Amazon have shown how personalization can make the buying process so much easier, especially online when so many choices are available. Knowing what you’ve ordered before helps the site determine other products you may enjoy. Of course, the difference here is that the collection of data is permission-based, as it is with Netflix and other awesome companies we give lots of money to -- repeatedly. What’s creepy today may not seem so in a few years as buyer perceptions change and new needs are identified and met.

The very thought of how much money this type of delivery system would cost is boggling. To even begin the testing, which Bezos claims they have, the company would have to invest in several of the drones. Amazon already puts a lot of money on the line to make customers happy. The Amazon Prime program not only offers free shipping, but buyers can also borrow almost any book for Kindle at no charge. They’re obviously willing to give up a chunk of change in order to make buyers happy and keep them that way.

This is an interesting example of investing in the customer experience. It's a huge front-loaded expense, of course. But one of the things we hear most often from ecommerce marketers thinking about investing in ecommerce marketing is how expensive certain activities (like having dedicated content creators to write blogs that attract and educate future customers) can be. Amazon is biting the bullet on the cost knowing that, like with blogging and the other inbound methods that power modern ecommerce retailers, the payback is in optimizing the life time value of the customer.

So, how real is this delivery system of the future? Well, the FAA seems to think it’s even more “future” than Amazon states, with this report stating that unmanned aircraft won’t be available to civilians until at least 2026. That doesn’t mean the on-demand deliveries are out of the question, of course, but it does mean we won’t get our holiday movies dropped on our doorstep the moment we want to watch them (thank goodness for Netflix, right?).

The reasoning for researching this type of delivery is sound, as outlined above. Amazon always knows how to keep other ecommerce and brick-and-mortar stores on their toes. Perhaps, however, the company was showing us a very different trick this time—namely, how to get everyone talking about Amazon. On Cyber Monday. With the whole world of marketing focused on ecommerce.

What do you think about the drone delivery system? Creepy or awesome? Real or hype? Can you see serious moneymaking potential in this out-there idea? We’d love to hear your thoughts!

The original Huffington Post article with it's citations can be found here. Just in case you think we're pulling an April Fool's joke a little early.