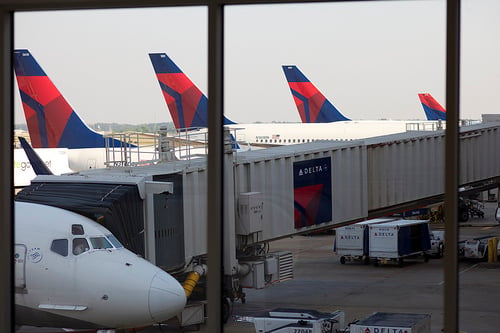 Force majeure. Always thought that was a funny phrase. An event entirely out of your control that prevents you from fulfilling an obligation, such as to a customer. In an age where consumers have more choices and louder voices than ever, what do you do when Mother Nature gets in the way and thousands of your customers are inconvenienced?

Winter travel will always suck, no matter where you’re going or where you’re coming from. Throw in something the media pundits coined a “polar vortex” and you’ve got potential holiday hell on your hands. But the polar vortex isn’t breaking news, and it definitely wasn’t awesome. North America’s frigid temps were the source of conversation all the way on the other side of the pond, from pubs to the backseat of cabs. I know, because I was there.

When I booked my tickets for Ireland back in September, I couldn’t even have told you the airline. I did what just about everyone else does: opened an aggregator site, typed in my destination, and then chose the cheapest flight. At that point in time, I was just as big of a nobody to Delta as they were to me. I had an lifetime value of “maybe.” Not even a dollar figure—just the possibility of buying another ticket in the future.

The polar vortex changed everything—for me and for Delta. When we showed up to Dublin airport ready to catch our first flight back to JFK, we learned the flight was so delayed that we wouldn’t make our connecting flight. The desk agent told us plainly that we’d probably end up spending the night in the airport before Delta could put us on another airplane out of JFK…but not to our final destination. In fact, the next flight out would take us to Detroit—the opposite direction of home—where we would likely spend yet another night in an airport. Orrrrr, we could just spend an extra night in Dublin.

The Most Valuable Ecommerce Growth Metric

The first half of the most important ecommerce growth metric is how much it costs to acquire a customer. The second half is how much that customer is worth to you over their lifetime as a customer. Simple, transactional economics don't tell the whole story about the value of individual customers to your business, and sometimes investing heavily in retaining and delighting a customer can have a significant back end.

When Delta suggested we stay another night before beginning our journey, they also offered us a night in a four-star hotel; breakfast, lunch, and a 3-course dinner for two; transportation to and from the airport; upgraded seats on the new flight; and an extra checked bag for free.

I’m not entirely sure how much these cost, but a conservative guess would put Delta’s expenses at $300. If we were the only couple for which the airline spent this amount of money, I still would have been impressed. However, from our flight alone, four other couples and two singles also received the star treatment from Delta Airlines.

Why am I so amazed—besides the fact that Delta gave us something for nothing just to keep us happy? First, no one asked how many times we’ve flown with Delta. I probably couldn’t have answered if they had. No one required a Delta Sky Miles number or pushed us to sign up for their loyalty program. As previously mentioned, our LTV as customers was next to nothing, especially since we always made our airline purchases through third-party sites.

Sure, they wanted to keep us from screaming our heads off in the airport and causing a scene. Not that we’re dramatic like that anyway, of course. Delta Airlines saw much more than a chance to soothe irritated travelers and keep incidents of rage at a minimum; they saw two potential life-long customers.

I can’t speak for any of the other travelers who received the offer, but I can assure you I’ve been converted. We fly to Ireland at least once per year, and I’ve always shopped on third-party sites for the tickets. In the future, I’ll stick to Delta only. Maybe the flights will be a bit more expensive, but I know now that service is guaranteed because of past experience.

When we fly at Christmas, our tickets are generally $1,500 each. If Delta considers ten years to be the lifetime of a customer, our value just went from “maybe” to $30,000. We also take two to three domestic trips per year, with an average of $500 per ticket. With two tickets purchased each time, our value to Delta is now $60,000.

If Delta never again needs to put us up for a night in a four-star hotel, buy our meals, or give us free upgrades, their cost to acquire us as lifetime customers yields 200 times their investment. At that rate, they can more than afford to smooth our ruffled feathers on future journeys, whether due to polar vortexes, security concerns, or airplane malfunctions.

As an ecommerce company owner, you probably see plenty of people looking to receive something for nothing. Complaints pour in with demands for free upgrades, free service, free anything-they-can-get-their-hands-on. Knowing when to take that leap and perform a random act of delightion might seem like an art form, but it’s really not.

Calculating the LTV of a customer with a complaint and comparing that to the cost of making that customer happy today can certainly go a long way toward inspiring loyalty. Sometimes, however, you just have to take a leap of faith, the way Delta Airlines did with me. Sometimes you have to gamble a little bit in order to win the jackpot. Are we world travelers with hundreds of thousands of Sky Miles under our belts? No. Will we ever be? Probably not. But they’ll earn enough from our purchases over the next ten years to make their risk worth the cost.

Has anyone ever surprised you with a random act of delightion? We’d love to hear about it in the comments!