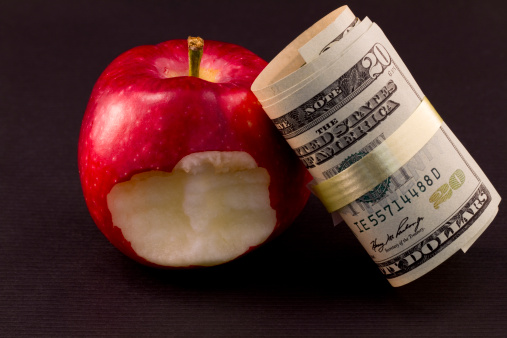 Consumers want to options that are safe, convenient, and easy to use when making online purchases. For this reason, alternative payment options like PayPal have really gained in popularity. Ecommerce sites realize now that, with mobile purchases making up so much of the total ecommerce sales, providing options that don’t require entering financial information every time a purchase is made is vital.

As if choosing from various payment options for your ecommerce site isn’t hard enough already, Apple had to go and decide to throw their hat in the ring. Really, who could blame them, with PayPal handling more than $20 billion in mobile ecommerce payments in 2013? One has to wonder why they haven’t thought of it before. Google Wallet, Visa’s V.me, and smaller companies like Square all comprise a large chunk of online payments, as well. Obviously, there’s enough money out there to go around when it comes to alternative payment options for ecommerce.

Apple is already in the business of making purchases easy and convenient, which gives them a head start on creating a payment tool for goods and services outside their current catalog. The transition to a payment option for many ecommerce sites would be an easy one for Apple, too. After all, they’re already in possession of hundreds of millions of credit card numbers for purchases of songs and apps on iTunes. Converting that information to a new program for online purchases from other merchants would make the process easier than ever for current Apple customers.

Also a big plus in Apple’s favor is existing customer trust, which isn’t an easy thing to gain. Amid stories of large retailers losing control of data, consumers are more wary than ever. Square has really captured a good portion of the market, especially for such a small company, but customers may still be wary for quite some time, until the company has had a chance to prove its security. A company that already holds the consumer’s trust due to years of information security has a great head start over newer companies.

Perhaps as a test run for future plans, the company already allows customers to use their Apple ID to make purchases in retail stores. Products purchased in the stores are scanned as they would normally be, and then the customer has the option of using the credit card on file with iTunes to make payment rather than pulling out cash or a credit card in the store.

Preparing for the Inevitable

Should Apple actually enter the alternative payment game, expect your customers to welcome the platform wholeheartedly. The big guys like PayPal likely have little to worry about, as many loyal customers will continue to use their trusted payment options rather than exploring new options. Consumers who have resisted payment through PayPal, however, may be ready to jump right on board with a company they’ve already trusted for years. Rather than replace already-popular ecommerce payment options, Apple’s payment platform could simply bring even more buyers to the online shopping scene.

Will you welcome Apple’s online payment platform when it arrives? I’d love to hear your thoughts on these developments in the comments.