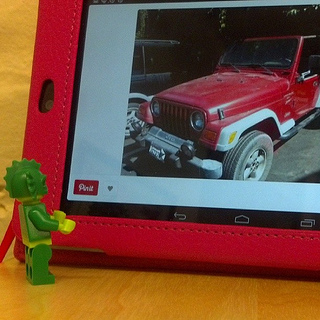 Seems like just yesterday that we were all debating whether we were going to hop on this "Pinterest" bandwagon, but surprisingly Pinterest has already been around for 3.5 years, with its 4th birthday coming in March 2014. While it may not seem that long to the average person, Pinterest has generated over 70 million users and during this time, half a million of which are business accounts. Don’t have a Pinterest business account, but wonder what all the hype is about? Have you been fence-sitting on whether or not to dive fully into a Pinterest presence? Hopefully this article will fix that.

Pinterest is here to stay -- and arguably a much better social media than ones we've invested in the past. Also, since it's essentially a massive site of manually curated things people want sold to them (whether it's physical products or travel packages to faraway places) the potential for leveraging Pinterest for ecommerce is only growing.

According to a study by Gigya, Pinterest beats out Facebook in e-commerce traffic at 41%. Facebook still trails with 37%. Pinterest users are also ready to shop, with spending nearly double that of Facebook. Women in particular are five times more likely to purchase something off of Pinterest than men. After all, 80% of Pinterest users are women, and we know most women love to shop.

Pinterest experienced massive growth, passing the 10 million unique monthly visitors mark faster than any standalone website in history, according to comScore. Pinterest's traffic and user adoption has increased time making it one of the most-used websites on the internet.

Pinterest is also capturing a larger audience of the all-valuable mobile market, with 35% of their users visiting the Pinterest site exclusively from a mobile device.

Want to make your pins even more successful for your products? Add your prices. A different study by Shopify showed that pins with prices get a 36% chance more likes than those without. People are going to love to see those pins of the amazing product you offer, but they are also going to want to know how much that fluffy dog pillow really is.

It Will Expand Your Reach (In More Ways Than One)

There are ten times more clicks on the “Pin It” button than “Tweet This” button. You know what I’m talking about: The Tweet It, Like It, or Pin It buttons that people can embed on their websites. Their prevalence and adoption are a trend you don't want to miss - especially on your own website. Given the fact that consumers use Pinterest in part to curate items for future purchase, make sure that you have an easy "Pin It" button on your site - particularly on your product detail pages.

Want to expand your reach even more? Use hashtags. Hashtags are used to identify pins and can be a lifesaver when doing so. You can also discover several other pins identified with the same hashtag, so that’s kind of cool. The Pinterest community uses hashtags slightly differently than, say Twitter. Hashtags on Pinterest are much more about search and discovery, whereas Twitter is more about a shared experience. So make sure you modify your hashtag strategy accordingly and leverage the keywords in the Pin descriptions to help people find your content.

Another reason to make it easy and seamless for people to share your content on Pinterest is the vastly larger propensity for pinners to repin than the resharing on other websites. Some studies indicate that as many as 80% of the pins on Pinterest are repins - making it one of the very few social sites with the potential to actually deliver on the mythical promises of viral amplification. You can use that behavior to help you get additional penetration into the networks of your existing audience.

In order to see a pin or learn more about it, you will be directed to a website, and that website could be yours! In fact, Pinterest now accounts for 25% of retail referral traffic (source?). Remember, you have to pin it to win it.

Users are more likely to spend more time on Pinterest than other social platforms. In fact, a study by comScore showed that the average user spends 98 minutes per month on Pinterest. When a potential customer clicks one of your pins, they can be directed to even more products from your company. This snowball effect keeps pinners around much longer and can increase the   leading to a sale.

While keeping all of the above in mind, there are a few tips I’d like to leave you with. Always keep your Pinterest boards and buyer personas in mind. For instance, ask yourself who your ideal customer is. Then, research what that customer is interested in and what types of content they pin to their own boards. Once you’ve figured that out, start posting your own pins, keeping that customer in mind.

Be authentic, though. The goal with Pinterest is to drive traffic and sales, but you don't have to just post your promotional content. Like with blogging, curate the kind of content that's going to attract the lifestyle and consumer audiences that are valuable to your company.

Last thing: Be social on Pinterest. Same as you would with Facebook or Twitter. Easy, right? Comment and like on other pins, use names and tag others too if you can! By doing so, you’re going to already be ahead of many current users since a lot of users don’t realize that this is actually a thing on this social platform.

So there you have it. Are you ready to dive into Pinterest now? If so, happy pinning! If not, you might want to re-think your answer.

Are you investing in a Pinterest presence for your eCommerce store? Why or why not? Tell us in the comments below!