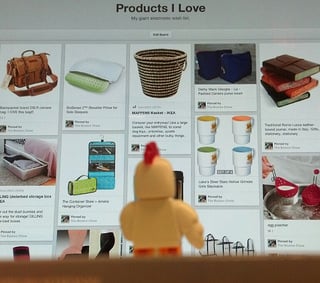 Compelling statistics show us Pinterest, is the little social media platform that could. Still often dismissed out of hand as a place to gather recipes and get ideas for bathroom redecoration, Pinterest is changing the game one pin at a time. With over 70 million users, half a million of which are businesses, Pinterest is actually a pretty heavy hitter in the ecommerce department. In fact, this infographic from Gigya shows that Pinterest enjoys 41% of all ecommerce shares, as compared to Facebook’s 37%. And now, with the introduction of promoted pins, they’re changing the game yet again.

Pinterest Is All Grown Up and Playing with the Big Boys

It’s not news that most Pinterest users are women—a whopping 80% at last count. Just because women are the ones doing the pinning doesn’t mean Pinterest can’t play with the big boys. They’re already dominating in ecommerce efforts, and that’s after going up against Facebook’s promoted ads and Twitter’s promoted tweets. By adopting the same model, Pinterest is set to turn the social media marketplace on its ear.

The new promoted pins went live for many users yesterday, but you may not have even noticed if you weren’t looking closely. The promoted pins blend right in with the other posts that interest you, meaning you won’t see ads for Victoria’s Secret when you’re searching for cool wine racks. Instead, you’ll see pins from companies that deal in wine sales, wine racks, wineries, wine accessories, etc. Score one point for Pinterest for not irritating potential customers right off the bat.

Just a few months ago, Pinterest changed ecommerce by offering Rich Pins. These pins shared pricing information and availability. Even better, anyone interested in the products shown can sign up to receive alerts when prices drop. This comes on top of their analytics package, which helps businesses determine which pins are gaining interest and which need a bit of a boost.

The promoted pins will only add to these features, which means the possibilities for ecommerce through Pinterest will be pretty much unfathomable. If they’re already leading the pack, just how much higher can they go?

If you’re not already using Pinterest to share your products, what are you waiting for? If you are, you may want to know just how to make the most of the promoted pins so you can get your slice of the pie. Right now, the option is only available to a few select businesses, but you’ll get your turn soon enough. Take some tips so you’ll be ready when the time comes.

As with any other pin, certain images will stand out among the crowd. You want to plan your promoted pins to be taller than those around them. If your products come in various colors, choose one that draws the eye, like red or orange. Pinterest may be designing the promoted pins to blend in with the posts around them, but that doesn’t mean your products need to blend in, too.

You can still include your promoted pins in your own Pinterest boards, especially since your board is how previous customers have found you thus far. Don’t abandon your earlier plans of sharing other pins that complement your products, either. Next to your promoted cashmere scarf, pin a how-to on wearing scarves in various ways. If you promote a pin with your latest throw pillows, pin home décor tips close by.

As much as you might want to keep up with your clicks, resist the urge to used shortened links. Instead, direct those Pinterest users who click on your pins to your landing pages. Here, they can learn more about your products and you can learn more about your customers. This is a much easier way to gather information without taking a chance on being marked as a spammer.

Put It All Out There

Take a page from J. Crew’s book and share your entire catalog on Pinterest. Most suggest not spamming pins over a short amount of time because your whole product line will get lost in the feed after just a day or so. By using promoted pins, however, you can be sure those products will pop back up with regularity as buyers search for specific purchases. You won’t need to worry about those pinners never seeing your pins again.

The only way to keep those pins at the forefront of your buyers’ minds is to encourage repinning, and the only way to get a repin is to share with people who love your products. And where do you find people who love your products? Within your current followers! Don’t rely on Pinterest to do all the work for you. You’ve got to share those pins everywhere to get the maximum amount of engagement. When your promoted pins are added to your pin boards, embed that board on your blog and share it on social media.

Pinterest promises their promoted pins will be tasteful, transparent, relevant, and improved based on feedback. Their goals is to be as unobtrusive as possible while still giving companies the chance to improve upon their ecommerce efforts. Maybe Pinterest thinks the pins will blend right in, but we’re pretty sure they’re about to explode Internet sales in a major way. Are you on board?

What about you? How are you planning to use Pinterest's new advertising tools?