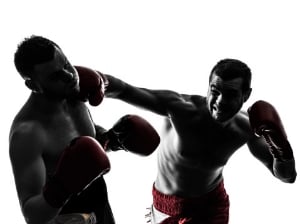 Maybe. And maybe not.

The obvious benefit for Facebook is that it already boasts 1.28 million users who are subjected to timelines crafted specifically for each visitor. Facebook can decide which companies users see, which brands get more engagement, and where ads will be placed throughout the day. This is all within any given user’s regular Facebook visit.

Amazon isn’t so lucky. They must rely on the typical ecommerce marketing tactics to bring users to the site. Social media, email marketing, targeted ads—no one goes to Amazon just to shop around and chat with friends, right?

So, let’s say you’re cruising reviews on Facebook to see what someone thinks about the new computerized toilet plunger you really want. You get a few remarks from friends that say it was the best purchase of their lives. Then, there’s the buy button, right there in plain sight. Do you A) buy, or B) leave the comfort and camaraderie of Facebook to purchase your new toilet plunger somewhere else?

Amazon’s Advantage in the Ring

Sounds like Facebook has this fight in the bag, right? Well, maybe not. The problem for Facebook is that Amazon already has the whole ecommerce thing down. They’ve got the 1-Click purchasing, the product suggestions, the review requests, and even the classic “ship for free” upsell. Some of that stuff—particularly the 1-Click model—is even patented, so no one’s going to do it better than Amazon without some serious legal repercussions.

Then there’s the whole privacy issue. Facebook has played fast and loose with user privacy in the past, changing settings and even allowing social experiments without user knowledge or permission. When Facebook starts asking buyers for financial information, what do you think the response will be?

We really won’t know until Facebook integrates the buy button and companies begin selling their wares on the social network. Until then, it’s really anyone’s guess. Facebook will certainly develop their own agreements with third-party sellers, and whether or not those are more agreeable than Amazon’s could change the way we all shop, anyway.

Will you use the Facebook buy button and enjoy that extra bit of convenience, or do you plan to stick to what you already know and trust? We’d love to know your thoughts on the winner of this round, so let us know in the comments.